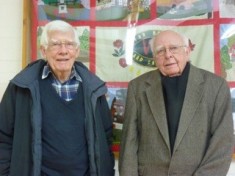 Both John (B: 1931) and Gerald (B:1929) were born and raised in Harston, their parents having moved from London to Harston after WW1. The Ives family lived at the end of Green Man lane, where John & Gerald were born. They lived opposite where John now has his bungalow and they used to have to walk to get water out of a well. They had two acres of land and two cottages. Gerald still has two acres of orchard at the bottom of Green Man Lane. They used to keep pigs there. Their ‘Howes’ grandparents lived in  Green Man Lane, and initially owned the land. They knew Robert Tuck who lived in Green Man Lane and although he couldn’t read he was still able to carry out his businesses. He was the first person to be buried in the Button End Cemetery.

Their father and Grandfather were both called Bill (William) Ives and they both worked at Chivers in Histon. Once their grandad bought the ‘tenancy’ of the Greene’s orchard in Pightle Close for the year, collected the fruit and used his mate’s lorry to take the fruit to sell to Chivers to make money. Another year he ‘bought’ someone’s walnut tree to sell the produce. Chivers did all their own maintenance and their grandad used to work there making baskets? Their dad was awarded a clock for working there 25 years. He cycled to work in Histon each day. Their grandfather died eventually from the mustard gas he inhaled in WW1. Grandad Ives lived in the last house in the Footpath. Their dad died age 54 when Gerald was 32, about 50 years ago but his mum lived until age 83. 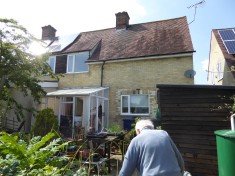 2016: Back of house showing window alterations after toilet door blocked up.

From Green Man Lane they moved with their parents to a three bedroom council house in Button End in 1937 when Gerald was eight and John six. Gerald has lived there ever since. As the house was built in 1937, they were the first tenants. The rent was 5s 10d when they first moved in.They were built for agricultural workers, Farmer Crow said, and they didn’t need electricity or a parlour. Downstairs was one living room and a kitchen. There was no plumbing and the toilet and coal store were accessed from the outside. It took a year before they got electricity (Farmer Crow didn’t want the lines across his fields) and they had to use candles upstairs as they got electricity downstairs first. They had a copper for bathing and had to heat up the water in it by putting wood/coal on the fire below the copper bowl. A chimney went up from it, the reason for the 4 chimneys on the house roofs of each pair of semis. A pipe went from the copper to the bath under the window in what is now the kitchen. There was no drain to take the sewage away so they dug holes in the garden and buried the waste. One of the reasons they had a big garden (75 yards long), Gerald thinks, as well as it providing most 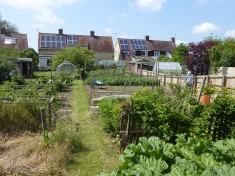 of their food for the year. Gerald’s dad was from London and didn’t know much about gardening but Gerald grew a lot of vegetables and won prizes at horticultural shows. Water from the sink would go into a soak-away in the garden. They also had a big tank on the back of the house to collect rainwater for washing, but probably had piped water from when they first moved in. Later on the outside toilet and coal-store was converted to an indoor bathroom, the copper removed from the kitchen and range removed from the lounge once Gerald had a fitted kitchen and electrical appliances. The Ives had to pay for the changes. When Church St was dug up about 40 years ago to put sewage drains in, they got flush toilets!

The Whitbys and Neaves lived in the first Button End council houses with hipped roofs. The Whitby’s in No8 moved in when they got married and had a daughter Christine who was a Senior Midwife at the Hospital. Mr Neaves in No 10 worked at Barrington Cement works. In No 12 lived Eddie Warren who worked as a gardener at the Manor. In No 14 were the Cox’s; Stan worked for Hays’ farming and his dad worked for Crow, farming. In No 16 was Mrs Ivo, a widow. The Ives lived in No 18 while Warren’s lived in No 20 and Reg (Jim) Maling in no 22. Three of the families, Cox’s, Warrens and ? all came from three old cottages next to The Footpath, parallel to the road, that were torn down as unfit dwellings by the council when they bought the land for more council houses.

The day war broke out, they listened on the radio. All windows were taped and blackouts ready. When the blitz was happening, they could see light in the sky in Harston. A German bomber dropped a land mine near Newton and made a huge hole in the field, which the children went to play in! They thought it was trying to get Duxford. During the war, they remember the Village Hall being used as an army mess, and tanks rolling through the village along the High Street.

Their mother worked in the Pye factory making radios and other things. Their dad was in the Home Guard. They used to go and watch them doing drill on the school playground in front of the school. They remembered their dad had a pain in his right foot and when told to turn was wincing! Bill Seagrave was in charge of Home Guard. During the war paper was collected for recycling in two cottages behind the Oddfellows Hall, at right angles to it. The cottages have since been knocked down.

As young boys during the last two years of the war they worked for Tommy Hayes at Baggot Hall Farm. John led the horses whilst Gerald loaded the carts with the harvest. At the end of the day the boys used to put the horses back in their stable and fill up their water troughs. They were given six pence an hour to help bring in the harvest. They both distinctly remember a fire which tore through the harvest crops one year after a steam train threw clinker from its chimney onto the crops. John remembers supervising POWs on Tom Hays land and them sticking their cigarette butt ends down his wellies.

The roads then were very quiet. Both men vividly remember playing football on the road on the now busy corner of Church Street up by the church. One memory sticks out in John’s mind: he and his friends accidentally knocked Ernest Northrop, the Harston House gardener, off his bicycle during one particularly energetic game. As small children they roller skated and played games such as whip top and hopscotch on what is now the A10.

After the war they played cricket on the recreation ground opposite Park House. Gerald used to draw a circle using string from one point to create the boundary. Bill Seagrave used to take all the cricket team in his Austin 7 for matches! Their father was a brilliant all round cricketer and won many trophies. Gerald also remembers when Dr Young gave some land to build the village hall on as long as he had an access gate left as he lived adjoining it. Dr Young was on the Village Hall committee.

They both talk of a vibrant youth scene in Harston during their formative years and they helped to run a youth club in Church Street. Along with their friend Ray Warren, they organised dances with other local youth clubs which packed out the Village Hall. Other events included guest speakers from Cambridge University, and taking bus trips, often on a double decker bus hired from Bill Long’s Harston-based company Long’s Coaches.

Together John and Gerald grew chrysanthemums and used to exhibit their stock at the Cambridge Horticultural Show and also the Fisons show which usually took place a few days later. The Harston Village Show was one of the biggest around, and the Ives were regular prizewinners for their flowers, fruit and vegetables. They comment that no-one went hungry in Harston during the war because people grew so much of their own food.

The Ives brothers were both educated at Harston Village School. They remember a bustling school with around 20 pupils in a class. Miss Greene of Harston House used to come and help Mrs Richards and ‘Daddy’ Royston run the school. They remember ‘Daddy’ Royston as a very kind man, but a strict disciplinarian who was unafraid to use his cane on misbehaving children. John remembers being caned on his first day because he didn’t want to go to school! They stayed at the school until the age of 14 when John left to become a welder at Fisons and Gerald moved on to the Tech College in Cambridge for two years where he studied Building. John joined him twice a week at the Tech College to study engineering.

John’s career as a welder for Fisons took him all over the world. Having obtained an advanced welding certificate he was sent to work in Greece, a trip for which he had to obtain a passport! From Greece he moved to work in the Sudan where he sprayed cotton crops and tells of how he used to swim across the crocodile infested River Nile! While he was in the Sudan Fisons was bought out and at the end of his contract with them he returned to England. Upon his return to England he bought the Harston Garage/Petrol Station, and together with a friend ran it for three years. John lives in Green Man Lane where his grandfather, Jimmy Howe, bought a house on a large plot for £140 in 1948. Behind John’s present bungalow used to be a cottage where Bob Tuck lived. 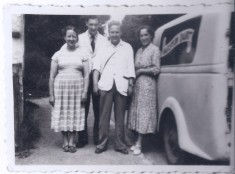 Gerald, aged 17, started work in 1946, as a delivery man for the Baggot Hall Dairy, using a horse and cart. After Andrew Bowden bought the dairy business, then based at 49 High Street, Gerald had to learn to drive a motor vehicle. He was a milkman for 17 years until 1963 when he found he could no longer cope with the work. He then supported himself by keeping pigs and having a market garden until he became a postman in 1971. Working out of Eddie Burl’s Post Office, at 28 High Street, he delivered the post around Harston with the help of his bicycle for 23 years until he retired at the age of 65 in 1994.

Having delivered milk and then the post, Gerald probably knows as much as anyone about the changes to Harston’s layout over the years. For example, along Station Road he remembers there being allotments for the Pemberton Arms on what is now the school’s playing field, commercial greenhouses, a poultry farm and a coal business. He remembers visiting Sunbourn on Newton Hill and seeing the reindeers and his friend Henry the postman being chased by one. He recalls various shops on the High Street including a haberdasher’s, a butcher’s, a General Store that closed and became an ironmonger’s, and also the old police station. He remembers that Willers Yard was originally opposite Chapel Lane, then moved to the corner of Church Street and Haslingfield road and then later on down Button End. Fleece Inn down Button End had a cellar.