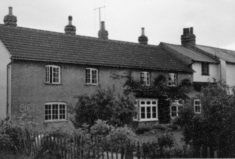 Having spent quite a few years of my childhood living in Harston I have decided to make a contribution to the Harston website that I discovered last year.

When I was 6 in 1948 and my brother 2 years younger our father and stepmother left Cornwall and moved to Cambridgeshire. Our father (Guy Aldis) was an architect and in post-war Cornwall work was hard to come by. In Cambridge he had obtained the job of Regional Architect to what in later years became known as the Area Health Authority.

We lived for a brief time in a small house in Fulbourn. During this time, unbeknown to us, Dad had acquired 4 cottages in Harston, the end one with a sitting-tenant, a Mrs. Samuels. He then converted the three vacant cottages into one house. The fourth cottage was incorporated a few years later following the death of the sitting tenant. The postal address of our home was ‘Lamorna’, Fountain Green, Harston, Cambs. I see from the website that it has now acquired the name of Fountain Cottage, Royston Road. 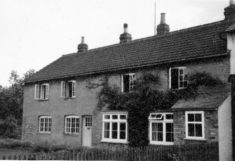 In 1952 our family grew to include a half-sister for my brother and myself and, later still, a half-brother as well. But by the time of this last addition to the family I was well on the way to adulthood and was soon to move away.

I have one very clear memory of the property that partly adjoined Lamorna (at bedroom level). The owners had a huge barn with a sturdy rope that hung from its beams. My brother and I spent countless hours in that barn, climbing the rope and swinging from it. It was wonderful. I became pretty good at climbing ropes.

This awakens another strong Harston memory – this time of the school playground.  Firstly, there were the horrible outside toilets which were freezing in winter.  If you walked across the yard during the day everyone knew exactly where you were heading.

Then there was the wonderful bit of climbing apparatus in the playground that provided endless fun at break times.  We did have the occasional casualty who was whisked away to return later with an arm in a sling or a leg in plaster but that was all a part of childhood.

The playground was usually marked up for hopscotch and in harsh winters we had some truly lethal slides.    Health and Safety would not have approved!

When I first started at Harston School sweets were still on ration.  So, no sweets for us children BUT there were Oxo cubes that we could buy!  (4 for one old penny I think).  We used to lick these salty delicacies almost like sweets.  Perhaps it was thought that salt was good for us!    Who knows? 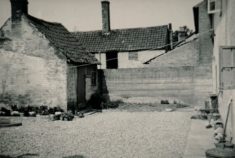 Back of Lamorna (Fountain cottage) c 1951

At about the age of thirteen I started earning some pocket money by fruit-picking for Chivers who sent an open lorry to the villages to gather up the day’s gang of youngsters who would then spend the day picking plums before piling back onto the lorry to be returned home with money in their pockets.

Another way of earning pocket money was to deliver the Christmas mail.   We would walk to Harston Post Office, wait to be given a bag of post and then spend the next few hours distributing it.

I doubt if these job opportunities still exist.  Perhaps they do?

My sister recalls a few further details about our Lamorna days:
We bought our groceries from Mr. Ware’s stores in the High Street.
Miss Jackson taught at the Village school and was also the local hairdresser in her spare time.
Both my sister and I recall that the headmaster was Mr. Shoote and that he was a nice man. Mrs. Barnes was also a teacher at the school. She was quite strict.

My sister had riding lessons at Miss Hays’ stables at Baghot Hall just along Station Road and ballet lessons at Harston House. We both remember playing tennis on the courts behind the Village Hall.

The Orchard, 10 High St before demolished

Another piece of Harson history took place before I left home.
On the main road, to the left of the Village school (as you faced it) lived a friend of our Dad, an archaeologist by the name of Professor Richard (Dick) Wyatt Hutchinson.

He was a batchelor and lived alone (or perhaps with a housekeeper?) in a big old rambling house (The Orchard – now demolished). He had a beautiful back garden – natural woodland full of trees and wild flowers and totally secluded..

He sold a sizeable chunk of this paradise garden to our Dad on the understanding that he didn’t build on it during his lifetime.
In the fullness of time Dick died and in approxmately 1961 our new house named Wyatt House was designed by Dad and built. I lived there for two years (approx) before marrying in the local church on 5 September 1964. A short time later I moved with my husband to Nottingham. 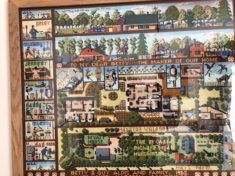 I remember Wyatt House as being amazing.  It was the first time that I had been in a private house that had central heating, though within a very short time it was being installed in new houses up and down the land.    With hot water on tap, Wyatt House was always warm and cosy and never had ice on the inside windows in winter.  The garden was idyllic and it’s seclusion enviable.

A few years ago my husband and I visited Cambridge and took a walk through Harston.  I couldn’t resist the temptation of walking down the drive and having a peek over the gate at our old home.  I was shocked to see that it was now surrounded by other houses.  Naively, this  possibility just hadn’t occurred to me.  I was so glad that our dad never saw this new development.

Tapestry designed and executed by Guy Aldis in the 1960s has various panels showing Wyatt House, floor plan, the family car, the various types of wildlife, the drive, etc. It also includes a section naming Richard Wyatt Hutchinson, the previous owner of the land.
Vignettes to the left show the family engaged in their various hobbies. (I had moved out by this stage).