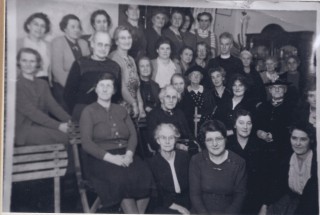 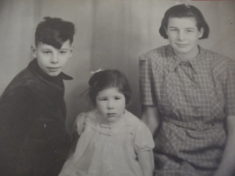 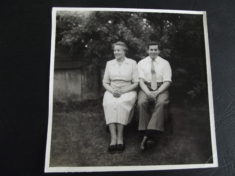 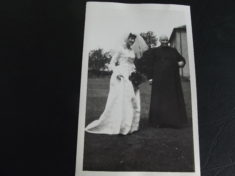 I was born 18th February 1941 at 138 High Street, Harston with Nurse Fitt in attendance, the same day that Newmarket High Street was bombed. The houses were semi-detached; 3 bedrooms upstairs, two rooms downstairs and a very small kitchen, lavatory outside and bathing in a tin bath tub brought in to the kitchen. My family lived one end of the row and Mr and Mrs Deacon, David and his sister Sylvia (I think that was her name) the other end.

My Sister Mary (B:November 7th 1930) the eldest child of Bernard & Grace Farrington and brother Alan were born in Button End ‘Fleece Cottage’, Harston. I believe this to be the Fleece pub built for the coprolite diggings which was quite an industry in Button End. My Mother Grace Farrington is in the Harston Church Mother’s Union photo, second from the left standing, that I noticed in your ‘Topics’ page under ‘Community Groups’.

My Grandparents George and Elizabeth Farrington resided at 7 Church Street Harston with their daughter Ida born on 17th September 1896 In Orwell Cambridgeshire. She was the eldest of three children born to George Ivatt and Elizabeth Farrington. Frederick followed on 12th September 1897 and Bernard William on 24 November 1900. George had retired from the police force and purchased 7 Church Street in 1921. Ida was an excellent piano teacher and taught many Harston children how to play. Ida also loved singing and was an accomplished soprano. My mother was contralto and many’s the time in church us children would be getting the giggles during the hymns listening to Aunties high soprano and Mother’s deep rumble.

My wedding was on 21st July 1962 and although Rev. Williams was no longer the vicar of Harston he came back to officiate for me. The wedding photo was taken in the vicarage garden.

7 Church Street used to be called Stag Villas as when the house was being built a stag was seen close by, it was shot and for many years the head was mounted in the living room.The land adjacent to Stag Villas that the Church Street Doctors’ Surgery is built on used to belong to Eric Jacklin. I thought I would mention this as his surname had been forgotten.

My earliest memories consist of being pushed down the village in my pram and mum singing ‘ You are my sunshine’. The army tanks all lined up down New Road, which ran adjacent to our house, and the garage which was turned into army barracks. I well remember turning the kitchen door key effectively locking out my mother so she had to coerce a military man to force the kitchen window and break in. I can still see this strange man coming in the window amidst my screams. Mum had made every attempt to get me to unlock the door but I was too young to understand.

Another vivid memory was when Mum and I were in the village one sunny day where we came across two well-known and well-to-do ladies; sisters they were, but their name escapes me, I believe they came from Harston Mill. Anyway while they were busy telling me how much I had grown and what a pretty dress etc when ‘Poppy’ my hamster decided to make an appearance. Poppy spent most of her life up my sleeve but now and again her little face would appear at my wrist, have a sniff and retreat back. The ladies must have thought she was a rat; they both screamed in unison turned and ran. I was left to contend with a not very pleased Mother.

I commenced school at Harston before I was 4 years I well remember riding my trike to and from school. I commenced in Miss Jackson’s class and then to Mrs Barnes who I have fond memories of. Unfortunately bullying was rife and I was moved to a school in Royston. I would catch the 108 double decker bus each day.

Later in her life my Mother Grace Farrington used to visit Mrs Stockbridge, with me in tow, Mrs Stockbridge would let us in and then lock the door which left Mum scared, I was there for what reason I don’t know apart from being a general nuisance. For Mum’s help Mrs Stockbridge gave her a silver sugar sifter which I now have. I feel quite ashamed of the way Mrs Stockbridge was treated especially by us school children. We would be playing in the front playground at Harston school and see her coming, we would all crouch down behind the wall and as she went by call rude names. She would respond by waving her stick at us.

My brother Alan told me this story. During and after the war all water had to be fetched by bucket from a standpipe. Ours was situated about three houses from us, about where Mrs Stockbridge lived. On this day Alan was with Mum standing in line with a couple of buckets which they duly filled. Mum’s old adversary was also at the pump with her empty bucket (luckily). This lady and Mum never did get on; anyway what was said between them has been lost in the mist of time but it was enough for Mum to raise her full bucket and empty the contents over her enemy. Poor Alan must have been so shocked that he couldn’t remember the mayhem that would have ensued.

I now live in Western Australia and it has given me great pleasure to find this web site and walk once more down memory lane.