You are here: Home>Memories>Sonia Watt's memories

Sonia was adopted by Dennis & Liz Chapman when she was about 6 months old. She had been born on 8 October, 1939. The Chapmans lived in a bungalow in New Road behind the garage. Sonia wasn’t told anything about her adoption when she was growing up and would often listen to the grown-ups talking to try to discover the reasons.

She later discovered that she was in the Cambridge News as a baby for adoption. When the Chapmans and their two daughters Dora and June were considering the adoption they asked Nurse Fitt, who lived nearby in Manor Close, to look into it. Nurse Fitt visited the home, possibly Barnardo’s, where Sonia was apparently sleeping nestled in an orange box – she was so tiny. The Chapman’s then visited and Liz, Sonia’ adoptive mum said she wanted to take the baby back that day so they filled in the forms and brought Sonia home.

Sonia’s birth mother was Doris Jepson and Liz Chapman had met her. Liz Chapman (nee Bye) wrote letters to her and added Sonia’s name at the bottom. For a few years, when Sonia was at school, Doris actually came and lived with the Chapman’s which confused Sonia a lot. She was never told who was who as regards herself but other adopted children in their family were told openly about their adoption. Doris eventually moved to Queen’s Close and later died in a fire. 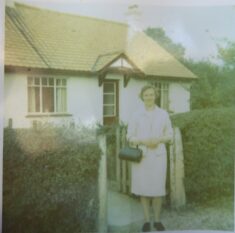 The Chapman’s had a three-bedroomed bungalow in New Road. The photo of the bungalow shows Sonia in front of her dad’s bedroom to the right, with the living room to left. Sonia’s dad was housebound in later life.

The bungalow was built with cold water only but they had an electric copper to heat the water which they would then carry to the bath or use to wash up with in the kitchen. They had an electric kettle and electric cooker. Although there was a toilet in the house the sewage went in pipes to a cesspit/hole in the garden and every so often a lorry would come and collect it and take it away. Once the village got a proper piped sewerage system in the 1960s Sonia’s dad paid to have a proper sewerage pipe put in.

There was a walnut tree in the garden and they would use the clothes prop to get down the walnuts then they would store them in boxes in the loft ready for Christmas, although Sonia ate a few. Her mum would also pickle some. Her mum also made all sorts of wine such as stinging nettle wine, elderberry and elderflower. Her daughter June didn’t like much of it and would tip it quietly away but June’s husband liked it. In the back corner of the garden her mum had a plot where she grew gooseberries, blackberries and blackcurrants. Sonia loved the gooseberries and would eat a lot.

Sonia’s mum’s sister Gladys was married to Christopher Gatward and they had six children – three boys and three girls. Often Liz would look after one of their sons, Derek, as well.

Every weekend Sonia’s dad either went to the Old English Gentleman or asked Sonia to go and get his beer, she can’t remember what it was called, and bring it home. He gave her enough money for her to buy a Tizer and a bag of crisps as well and would always tell her to keep the change.

After Dennis Chapman died the bungalow in New Road was sold to the garage and knocked down when they expanded.

Sonia’s dad Dennis had Manor House Farm nearby, off the High Street. The 1961 photo shows his fields and farm buildings below ‘The Drift’ tree line, with Manor Close along its northern edge; the entrance was off the High St next to the Old Manse. You can also see the Chapman’s bungalow behind the garage in the foreground.

Sonia loved going to the farm after she had changed after school. She went to feed the chickens with corn and get water ready for her dad to feed the pigs. She would climb up the haystacks to find where the chickens had laid their eggs and would collect them – although some tried to peck her when she tried to take their eggs.

They had fields of corn and sugar beet. They would put the sugar beet through a mangle to make feed for the animals. They had a chicken place in the middle of a field where they also had geese and one gander which scared her. One day the gander kept her stuck there and her uncle Ted Bye helped rescue her from the shed.

They had a cow which provided their own milk and her mum would keep some to make butter after they had taken the cream off. She would give Sonia a churn which she would bounce on her knee or shake in the air until it thickened into lumps. When their cow was miked Sonia would take the milk around in churns for members of the family – June, Dora and Uncle Ted (Bye). Sonia loved her dad and he would give her a ride on his tractor on the way home, but always told her to take care as she got off.

Sonia didn’t start Harston school until she was nearly 6 as she hadn’t spoken much before then. She loved Mrs Barnes as she helped her a lot to cope with her dyslexia, as did Mr Royston who she would read to – more so then other teachers. She remembers a Mr Johnson and Miss Jackson too. When it was Mrs Barnes’ birthday each year she would treat the children to an icecream.

At school everyone would get a spoonful of malt but when the girl took her for hers Sonia would get another one if her back was turned. They did cookery in the big hall but Sonia would often either forget the recipe or the ingredients they had been told to bring so might need another girl to remind her. Sometimes they did some work on a sewing machine in the school house with Mrs Royston but Sonia never mastered it, even when she had one later when she was married.

There was sometimes a caravan where the school dentist would check their teeth. Sonia didn’t like this as if you had a bad tooth or wobbly one they took it out. 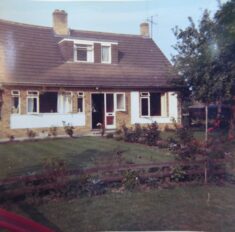 Sonia’s adoptive mother Liz was very overprotective of her, partly because she had had some fits as a child. She left school at 15 but her mum didn’t want her to go out to work. She did however, do lots of jobs for her parents and sisters around the home. She cut three large areas of grass that were behind and on each side of the house – by the time she had cut each in turn it needed doing again.

Sonia didn’t do much cooking but she did enjoy making three Victoria sponges every weekend, one for her mum and one for each of the sisters. On Friday’s Sonia would pick up fish and chips from the mobile van for all the family at midday dinnertime. She would deliver Dora’s first and leave it in the airing cupboard, then deliver to June and finally bring the Chapman’s home. The fish and chip van would be back in Queen’s Close on Friday evening too.

Sonia did consider delivering papers for John Northrop who had married her dad’s sister Maureen and lived in Queen’s Close. However, she was scared of any dogs she might have to face when delivering so didn’t want to do it.

She would also look after Dora’s and June’s children, taking them to school and picking them up. Or she would take them to have their hair cut. After they had visited, Sonia had to make sure her pet tortoise had been left the right way up!

Dora married Reginald Radford (1944) and lived in Queen’s Close.While June worked at the doctors and Dora worked in Cambridge Sonia would do their housework. Dora later still lived nearby as she had a bungalow (photo) built for her on her dad’s farm land.

Sometimes Sonia would go cycling by herself to Shelford to visit her mum’s brother who lived in some cottages near the bridge over the river. Other times she would go to the Fair which was held in The Park (belonging to Park House) – there were tortoises there but Sonia can’t remember whether they were for sale or prizes. Once or twice she went to the Baptist Sunday School but not very often.

Gerald Ives used to deliver milk along New Road with a horse and cart. He would let Sonia ride on it as he went around New Rd. Later he became a postman. After her dad got rid of their cow, the Dairy (Bowdens) behind the Green Man would deliver the milk. If they ran out, though, Sonia would be sent to get some direct from the dairy there – eggs also. On the other side of the road from the dairy there was a shoemaker who had a shed (Victoria Terrace). On the opposite side of the High St there was the doctor’s surgery near the Coach and Horses. Opposite the Village Hall was a grocers shop with a hardware shop to one side that sold lots of pans and crockery. There is a mirror on Sonia’s wall which she says she bought there. On the other side was Miss Jackson’s hairdressers. 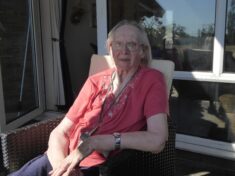 Sonia married in 1976 and moved to Sutton, near Ely with her husband Pete Watts. She lived there until he died in Feb 2002 of a heart attack. Wishing to be nearer her remaining family the council was contacted, forms filled in, and after a couple of months or so, Sonia was lucky to get her bungalow in Meadow Way which she felt straight away would a good home.

Sonia’s niece would take her to Bingo in the Village Hall on a Monday. Bingo is now in the communal rooms in Meadow Way on a Wednesday. Before the Covid lockdown there was a residents coffee morning in the Communal Room every Tuesday.

After Sonia returned in 2002 she visited her sister Doris’s new house in High Meadow. After her dad died Dora had sold the land the farm was on and had a new house built when High Meadow houses were built on the land 1998-9.