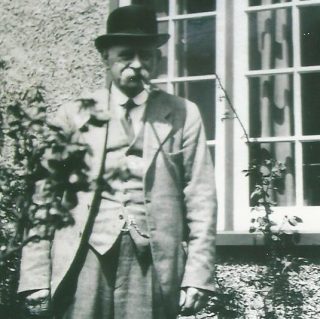 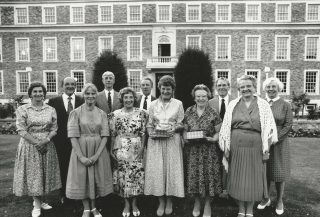 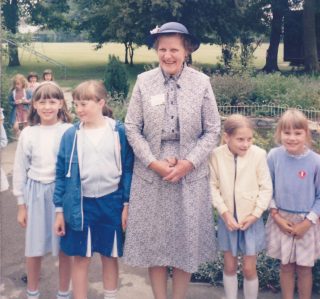 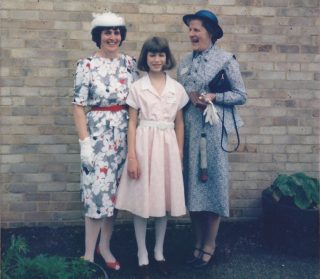 Born in 1930 Mary Kathleen Askham passed away at Wymondham, Norfolk on November 5th 2017 aged 87 years. She was the widow of the late Reverend L. C. Askham.

Mary was born in 1930 and her family lived in High St. Mary’s brother Albert (& wife June) lived in the High Street (Cambridge Rd) in Harston when married but later moved to the Headmaster’s House in Soham, then to his own house he had built there. Albert was on Harston Parish Council for a while.

Mary’s dad Vic had an allotment. The allotments were where the school playing fields are now, behind the blacksmith’s workshop where he worked. Where the Paddocks are now used to be a nursery with glasshouses.

Mary’s mother made her own bread and Mary would be sent to Harrisons to get the yeast. It wasn’t till later on that Mary had ‘bought’ bread.

Mary went to Harston school at the end of summer term/Jul when she was 3 years old. Mary had a photo of herself in the infant class. She used to go home for lunch for an hour or longer and slept at school on camp bed afterwards. While in the infant class she can remember the 1937 Coronation. They had an enormous party in The Park- where she remembers an adult on a tricycle.

There were two Miss Jackson teachers; one taught her brother and left before another Miss Jackson who taught the reception class. Then Mrs Richardson came and Miss Pluck (who left to be Head at Newton).

One of Mary’s favourite teacher was Mrs Richardson. (Before the war you were not allowed to teach if married, but you were during the War.) She lived in Linton with her family at the weekends but caught the bus back to Harston to teach, arriving back at 9.15/45 so Mary had to stand in front of the class to keep the quiet until Mrs Richardson arrived. During the week Mrs Richardson lodged with Sophie Lawrance (married to William Lawrance) in Button End.

Evacuees where organised by Mrs Bisseker with the help of the Hays. Stan Loveday was a ‘lively’ evacuee who lived with the Austins- he would be in aisles between the two by two desks. They all had desks with tip up seats.

Next to the school was a nice man called Mr Hutchinson who had lovely primroses on his land. He later gave the land- orchards – to the school for the playground & beyond. During Wartime when the air-raid siren went off they went into the trenches dug on this land behind the school, but later on they were asked to go to homes that were near and take another child with them – which surprised Mary’s mother when it happened. Mary remembers seeing a siren on top of the Police House.

She was at Harston School from 1933-41 leaving when she was 11. Then she went to the County school in Cambridge having passed her scholarship.

There were very few cars in those days and Mary and her brother would play in the road jumping shadows. One of Mary’s good friends was Mary Farrington who lived in Church Street. They used to play everywhere – in the meadows in Button End, at the Railway Station which had a warm fire in the waiting room, and up the hill on the other side where Hays farmed (where people thought there were spies).

Mary went to Brownies on Monday evenings in the Village Hall. Mrs Kendon was the Brown Owl and one of the Hays girls was Tawny Owl. The three girls from Newton View also went- Monica &?

While at school and until she married Mary played tennis regularly/most evenings at the Village Hall and at Harston House. She played with Jimmy Starr, Mrs Tanner & Mrs Cook. They had to re-mark out the court fairly regularly – on many evenings. In winter they played badminton instead, inside the Village Hall. Jimmy Starr was involved in the Young Conservatives and Youth Club, too.

Mary was involved a lot with the Church, and did bell ringing with a group of others – Mr Cook from Newton, Brenda and Mary. There was a lot more emphasis on church and chapel in her earlier days. It was much more High Church in those days- more rituals like Catholics but less so when Lennard Askham, later her husband, took over. Mary went with her mother and grandmother to Mother’s Union meetings in the Vicarage, and later in the church school room in Church St. Helen Greene was involved in the Parish Church too and would invite people back to her house opposite the Green. Church Fetes were held at Harston House. Mary Greene painted a picture of Mary’s father and one of her uncle Harry.

Mary went to WI meetings with her mother. After the War she went to film shows that were started in the Village Hall.

The Lennards used to produce plays. They had a lovely gallery in their house where people, including Mary, could practise some amateur acting. Acting may have stopped when Lennards moved away. Mrs Royston, wife of the Headmaster, was also involved in acting and light opera. Mary went to listen to light opera at the Village Hall. She also remembers some Gilbert and Sullivan performances like the Mikado.

Mary left Harston at 18 to go to University. (Mary went from Harston Station to London in 1949 for her University interview.) She then taught in Cambridge first.

When Mary married Reverend Askham in 1955 she went to live in Barton, but travelled in each day to teach at Harston School. She did ‘The Harston Project’ with the children when David Burrows was the Head. This involved collecting photos from the pupil’s families. She would show pupils where the old artesian and other water points were. When she was a child her family had to go to her grandmother’s – the Blacksmiths house, no 4 High St, to get their water. Few houses had a supply so she was lucky. She left photos connected to the Harston Project at school. Gillie Pluck was Mary’s assistant in the reception class. Mary later taught year 3. Mary finished teaching at Harston School in 1989. Kath Rayner cleaned at the school when Mary taught there.

The Chapmans lived opposite the Lawrances in the High St – he worked on the railways but also had a smallholding.

Mary was good friends with Mary Farrington ( lives in Mepal) who lived opposite Harry Lawrance in Church Street with her parents Bernard & Grace and brother Alan. She married a Fuller. The Farringtons lived in Button End first, then the High St.

Mary was also friends with Alice Kendon who had several brothers – Adam, Adrian and Andrew. The Kendon children went to the small school at Park house where the Hurrell children went- Martha & William. Mr Kendon was a poet who lived in the High Street.

Mary still knows Margo Tanner (as she lives near her in Wymondham). The Tanners used to live in no 46 High St, renting it from the Phillips who were related to the Greenes of Harston House. Then the Tanners had a bungalow built behind, to the right of the Mill Cottage (where the Cullingfords lived) at the beginning of Mill Rd.

Mary recalls you could set your watch by Rev Bissecker’s walks- he always went at 10.30 every day and walked with his walking stick across his back. Mrs Bissecker visited Mary when she had chicken pox and gave her a gift?

Mary can remember a sweet shop on the corner of Church St, Haslingfield Rd and Button End- about 2 doors down, run by Lou Northrop.

One of Hays sisters ran the Riding School at Baggot Hall Farm.

The Post Office in Royston Road was run by the Banks sisters who lived in Newton. Then it moved to the house in the High Street owned by the Lennards.