You are here: Home>Memories>Ruth Pitt's memories 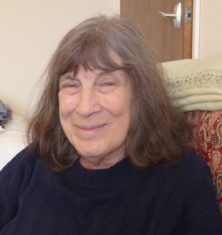 Ruth was born in 1941 in the Chestnuts, opposite The Green, in Hauxton. Her father was an artist- engraver while her mother made a business of needlework, making dresses, and ran an art class one morning a week in her home.

Initially her mother taught her to read and play the piano at home in Hauxton but when she was six she cycled to Mrs Kendon’s private school in High St, Harston. When Ruth went there another teacher there said ‘she can already read, she doesn’t need teaching!’ Mrs Kendon was a lovely woman who had three sons all named beginning with A- Adam, Andrew and Adrian. The latter was Ruth’s age so they would play together. There were about 25-30 girls and boys at the school which was in a big house (117 High Street) with a big beech tree there. In the back garden were classrooms which seemed modern at the time- not sheds or converted barns. Ruth remembers going into one for Nature study. Once Ruth stayed for a meal in the big dining room at the front of the house. Ruth enjoyed the geography lessons there as they would act out what they knew about the countries outside- playing Indians for one country and drinking coffee, not very nice, in small cups, like the arabs did.

Once the school went to Mrs Hurrell’s when she was having a ‘hayparty’ with a big wagon set out on the back lawn with pretty tables and chairs- just like in a film. Martha Hurrell was Ruth’s friend and sometimes they would play in the wooded area of Park House where Martha had a proper playhouse. The Hurrell’s would ride their large horses down the Drift. Ruth wrote a poem about the Drift. Other children she remembers who went to Mrs Kendon’s School were John Bishop and Sarah Rodiss. John lived at Hill Top Farm and she went to his party. Sarah lived in a big house where the car showrooms now are so their house was probably knocked down. Ruth was also friends with Katherine & Vanessa Ripper (Austrians) who went to this school. They had a huge party at Christmas and she was invited to choose a cake from the Christmas tree. They lived in a big house opposite the Pest Control in Hauxton which their father had set up.

A happy education at Harston School

After Mrs Kendon’s school Ruth went to St Margaret’s school run by Mrs Watmore in Covent Garden, Cambridge, then Sawston, but later moved to Harston school where she could return home for lunch. Her mother insisted she wear a pinafore type uniform. She was very happy at Harston school and remembers it as a time when they played marbles in the playground. They had little bottles of milk to drink and if anyone was away they got to drink the spare ones. There was a big boiler in the main hall of the Victorian block (facing High St) with a guard around it. They had a domestic science teacher who visited them to teach and Ruth never forgot what she had taught her, despite being naughty at times. Ruth got ideas for pranks from the two comics she read at home, along with the Enid Blyton books. Sometimes they went to Haslingfield school for cookery when Mr Pig was Headmaster there. Sometimes after school she went to the village hall for dance classes. Ruth enjoyed playing netball in the school team run by Mrs Kirkham. Sometimes they went to The Park by the Drift to play rounders; at other times to practise for sports day. Ruth remembers Eileen Pugh being very good at sports. 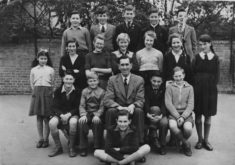 Ruth has an old autograph book signed in 1956 by many of her classmates and Mr Donald Shoote seen in the school class photo. Ruth is at right end of the middle row. She remembers Robert Arbon, Peter Wick, Ann Cornell, Judy Anderson, Jennifer Wiles and Sally Grey, in particular. Sally used to get her mum’s shopping for her on the way home from school. Sometimes they might get sweets from the shop that sold wool next to Stockers. Peter Tyrell was also in the same class and she recently saw him by chance in Newton. Jane Chapman she remembers as a good cook and also a good leader. Ruth also made friends with Jacqueline Puddifoot who came to Harston school after Ruth, in about 1953/4 when Jacqueline’s parents came to run the Coach & Horses. They were in an end classroom with a side path round to the playground.

At that time the schools didn’t do a lot for further education but Mr Shoote, the Headmaster then and a real gentleman, listened to the students and parents. When Ruth asked to learn French he organised it and for her to go to the Tech College to take the Art exam so she could study Art and write poetry.

In the days of Tommy Steele, Elvis Presley and rock and roll, Ruth used to admire Joyce and Jean Chapman who had lovely clothes- black velvet pants and big flared skirts with spots on.