You are here: Home>Memories>Peter Elliott's memories 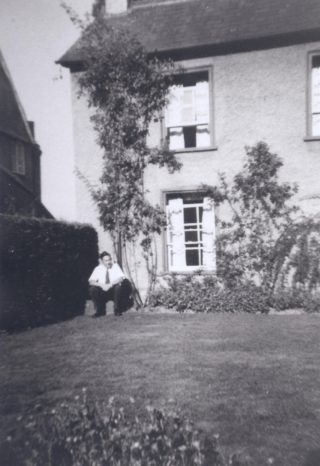 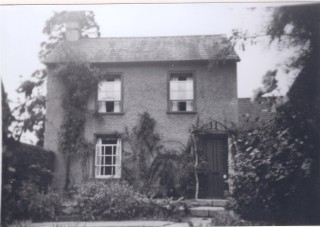 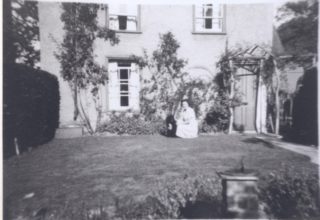 After the war, around 1949, my mother and father came to live in Harston. Dad was flying Sunderlands in coastal command, serving in Ceylon and other areas. Directly after the war he spent some time flying our forces held prisoners back home. Dad was taken on at NIAB as senior trails officer and latter assistant director. Ian Stewart was also in the same squadron as dad and they regularly flew together. The Sunderland at Duxford came from the same squadron. (Prof Ian Stewart lived in High St before moving to Edinburgh. He taught Tony Blair (ex PM) at St Andrews, Scotland.)

Mum and dad lived in Castle Cottage, a tiny cottage adjacent to the Bowdens on one side and Premier Coaches on the other side, in Harston’s High Street. I’ve seen the purchase receipt in a file not long ago. The cottage was set back and Mum said there was a long hedge on both sides and the dog used to enjoy chasing the postman, Henry Oakman, from top to bottom. I’ve still got the sundial and the brickwork.  Strangely, dad transported it from an aunts in Guildford. Their tiny cottage had the bath under the kitchen table, and a very modern kitchen unit with knife draw, two draws underneath, a storage area on top and a board for bread rolling; we’ve still got it. The photos of Castle Cottage show mum and dad including Monty the dog. I was wondering were dad kept his car?

Dad always said the council were wrong about Castle Cottage being demolished to make room for a bus yard! Mum and dad moved to the Little Manor in Hauxton around 1952/early 1953 and I have lived in Hauxton for 67 years. There are only a very few long lived Hauxton people  left.

Mother taught for some years at the school run by Mrs Hurrell, in their house (Park House). Mum hadn’t far to go, across the yard and through the wall gate into Park House grounds. There were rooks in the trees then, although many more. She always spoke affectionately towards Mrs Hurell and enjoyed her time there. William Garfitt was one of her pupils there in late 40s/50s, as was Mr Reynolds son. (Mr Reynolds tragically drowned when caught in a creek by an incoming tide while wildfowling in the Wash.)

Mum left Hurrell’s school, and was teaching in Cambridge before they came to Hauxton. Like Mrs Hurrell’s school that was private so you paid to go there, we knew Mrs Bambridge, the owner of Wimpole Hall estate, who had a small school for estate workers children.

My mother Audrey wrote the Hauxton history book (1993) ‘Hauxton – in Times Past’.
Mum was much involved in music and singing. She appeared in many productions at the ARTS in Gilbert and Sullivan performances with the Cambridge Operatic’s group. Mr and Mrs Moore from the top of Station Road gave music lessons and help. I think Mr Moore played the oboe. Then there was Mrs Nora Sellon from Button End who played the piano.

Both Mum and Dad used to talk about near where they lived watching the Willers family all walking in line past the hedge going to, I think, the Baptist Church. The Willers worked with a hand funeral cart.
There was also lady with horses near mum & dad.

The Queen came to Cambridge in 1962-3 to open a new wing at NIAB. She also stopped at Colonel Hurell’s home because he was High Sheriff of Cambridgeshire. They had tea and fairy cakes. Mrs Hurrell was asked by the Queen ‘who made the fairy cakes?’ Mrs Hurrell responded by saying it was her. They were much appreciated. Mum was in the kitchen helping.

I knew the Armstrongs well. They were a generation that got things done for the community. They were good supporters of the village and both were respected for their help over the years in the community. Iris gave dancing lessons in her home. I went to her to have ballet lessons. She was super.

I remembers Mrs Kendon and also Mr and Mrs Hartshorn, Val Joslin’s mum and dad who did a lot in the community – they were a godsend!

Mr Ripper, founder of Pest Control, originally rented a house called Sunbourn on Newton Road, Harston. Mr Crow said the police used to park near Harston station during WW2 and watch the house owned by Utsi’s (Sunbourn) on the hill 24 hours a day where Mr Ripper was staying – he was an Austrian chemist – under suspicion. Had Mr Ripper got something in his past connections that never came out?

Mr Ripper then went to live next to the Vicarage in Hauxton, opposite Hauxton Gap. The house, now called Redfield House used to be called Ravenscroft. Dr Ripper bought the house from the original owners; on moving the house was let out, then sold in the late 1980s. Three individual families have lived in the house which is now on the market again.

Many years ago I met an old lady and grown grandson and daughter walking up my drive to the packhouse (just off the Cambridge Rd on the northern boundary of Harston opposite Hauxton Gap). She told us she was the daughter of the man who had the house built on what was a paddock. Her mother and father became concerned about the substances being produced on the site near the old petrol station – even then there was concern as to the nightmare developing. Workers were taken ill and dying on a too irregular pattern. Dr Ripper rented the house and lived there for several years. There are serious ground water problems all around that area despite an almost denial by the authorities. There was one more; the wells at the Rectory farm we’re shut around 1953. I’ve got the officers report from then. He stated chemicals were found in the water! We know that chemicals were found in ground water near there.

In the early 1990s the packhouse produced 90 per cent of the frais des bois crop in uk supplying London markets – Borough Market, some large establishments and Buckingham palace, and three supermarkets. There were also probably fifty thousand asparagus bundles per season and tons of late raspberries all to the London market – good fun!

Miss Hays had riding school and I went riding once a week at Baggot Hall, in Station Road, around the farm. It was a great start to riding and jumping on a white pony called Shadow. I also remember the market garden in Station Rd.

I got on well with Harry Lawrance, the blacksmith, a wonderful chap, although he had violet mood swings. I worked for him for a few weeks in his workshop. In 1968/9 Harry was shoeing horses although he did much more than this. Amongst other general blacksmiths work Harry made some lovely gates. These were works of art; no welds, all riveted. Some of the main gates to the University are similar.
Before Mr Turner gave up The Mill at Hauxton he summoned dad and myself to the Mill. At the rear was a lean-to full of, amongst other things, a blacksmith’s forge, bellows and boxes of hand tools. I believed they came from either Harston, off Harry, or the blacksmiths at Newton.

I knew Jean and Albert Hearn & son Jeffrey. Albert was a builder and Jean ran for many years a ‘pick your own’ and grew Christmas trees. Those were the days when strawberries and raspberries only appeared in the early summer, not as now when they are every day on the supermarket shelves.