You are here: Home>Memories>Win Manning's memories 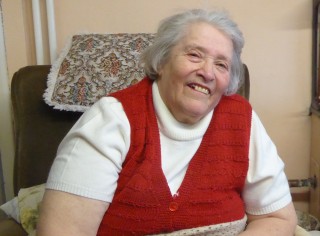 Win was born in March 1937 in Barrington but her family moved to the Eversdens where Win enjoyed country life as a child, especially visiting and helping out with the animals on local farms.

When she was 15, having left school at Easter, she visited Hays Baggot Hall farm with a friend who went riding there. Win asked if she could look around and liked what she saw so told her parents who suggested she go and ask for work there. This she did, meeting Tom Hays the farmer straight away, and he offered her a job in the dairy, starting straight after Easter. He didn’t think she would last as she didn’t look strong enough, but she did. She cycled daily to work there from Eversden for 11 happy years (1952- 63 when she started a family).

The workforce entered by the last entrance nearest to the station. Some of the work involved some heavy manual lifting of bales, etc and people in those days didn’t realise how it might wear away your body, Win since having had her hip replaced. She worked milking the cows (nicknamed ‘the meadow ladies’), getting them clean and ready for the machines to milk them in the milking parlour, which was a bit further back down the entrance lane. She also helped rear the calves and heifers. She took orders from Mr Fitch (her husband’s stepfather) who was the head cowman in charge of the health of the livestock. They had 60 Shorthorn dairy cows initially that gave a very rich milk but changed to Friesians when people wanted less rich milk. They no longer have dairy cows but rear calves from their mother’s milk. Win would also drive the cows to the fields over the railway line, checking first with the guard, but after she left taking them across the rail line was stopped (possibly after the station was shut?)

They had two milk ponies which used to pull carts that delivered the milk around the village. Harold Shipp (Jack as he was called locally) and Gerald Ives would deliver the milk using ponies. The white milk vehicles they used later were parked before the big barn. The big barn was both a store for corn and for vehicles. Later, the churns would be left on the roadside platform on Station Rd for the lorries to collect.

Win also helped the Hays with turkey plucking in winter time for the Christmas market.

Win met her husband Norman (B:1925) at Hays farm- he  was older than her and worked on Hays’ land ploughing the fields and maintaining the machinery. They married in 1958 when Win was 21 and she worked at Hays farm until 1963 when her son was born. They lived in a tied cottage in Button End, which Win has rented since Norman died in 1983. Originally it was thatched, but when the roof needed repairing in 1970 Norman asked for it to be tiled to reduce any risk of fire. The top half of the house is newer, the bottom half is over 300 years old and was probably 2 cottages. There are still two adjoining cottages on one side and one on the other. Win’s son Colin lives in one and also works in the farming sector, as an agricultural contractor with the Austins based in Haslingfield.

Originally Eileen Hays lived at Baggot Hall farm where she had her riding stables and gave lessons, but when her brother Tom, who had lived in ‘Woodcote’ at the end of the now Orchard Close, moved into Baggot Hall farm, Eileen moved into ‘Woodcote’. Tom’s brother Bill lived in the Evergreens, High St and Bill’s son William farmed Rectory farm.

As a young widow Win worked many jobs and was used to getting up early in the morning to work, often as early as 4am. Her friend Joy Carter worked at the High Street surgery first, then Church Street, and recommended Win for a job there, which she did for 16 years- washing blankets, etc before the days of paper towelling. She retired from there in 1997. She had also worked for Tanner & Hall for 16 years, cleaning in the evening when Colin was at school.

Other people and places Win remembers are the Warrens who lived at Button End, Audrey Coteman who lived in the Station house, Jack Northrop who delivered the newspapers – later taken over by his son John and Peter Stittle who lives at New Farm. Mr Ware had the shop (no 29 High St) next to Phyllis Jackson, the hairdressers and the Knights had the house opposite the Post Office (where her friend Joy Carter also worked). She thought Vera (Stocker’s) haberdashery/clothes shop was called ‘Odds & Ends’.