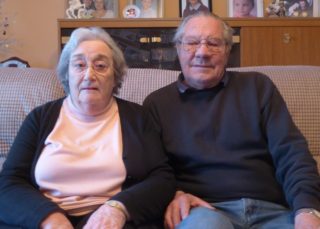 Joan (nee Stittle) was born/lived in 5 Hurrell’s Row with her family before they moved to the top of Button End, at 5 Hill View cottages (now 4 Button End). Joan’s dad, Arthur, bought 1 Fleece Cottage off Bertie Northrop (who lived in the other Fleece Cottage). Arthur had been born in the cottage ‘Avalon’ next to Greystones and lived opposite the artesian spring where they got their water. A plinth had been put up and the water piped out. Arthur’s mother Selina (nee Northrop) used to take her vegetables over to the spring to wash the dirt off them. The black building next to Greystones, and still there, used to be a coal house. Arthur had got smashed up in the war and ended up in Newmarket hospital. After WW1 he worked for Bertie Northrop as a builder, then went to work at Barrington cement works as a kiln burner. Arthur used to walk to the hill on Newton Road to get milk. (Later on Jack Shipp brought milk round on a horse & cart, sometimes with Win Manning. Win was married to Norman Manning. His sister Margaret married a Fitch who also worked for Hays.)

George Stittle was Joan’s grandfather. His sons Bill and Alf worked all their life for Hays, as did the latter’s son Ted and also does Peter, who still lives in New Farm owned by the Hays.

Joan’s brother David Stittle, married to Wendy (nee Burl), lives in the High St, behind the Post Office, where Wendy’s mum & dad once lived when they ran the Post Office. David was a chemist at Barrington Cement works, called Eastwood then. They used to make bricks there as well as cement.

Mike worked for the Co-op first delivering groceries for 6 years, including to Harston where he used to chat up Joan on his rounds, before dating her. He then became manager at Whittlesford, then later worked for Co-op Insurance for 30 years.

Soon after Joan’s marriage to Mike in 1960 they bought the land in Button End from Bertie Northrop just beyond Fleece Cottage to build their bungalow, Oakhaven, where they brought up their two sons (Shaun & Simon) and where they still live. When Mike built their house he noticed the old driveway for coach & horses that went down his present driveway from his front garden round the back of Fleece Inn (Cottages) where they would get off, then swung round back onto the road by Violet Cottage. The latter still had hooks inside in the 1960s that had been used to hang up the harnesses.

Bertie Northrop had been born in Violet cottage (since knocked down). Bertie was one of many children in the family and related to Joan’s grandmother Selina.

Joan often used to play around the station area with her childhood friends Maureen Northrop (now Ellwoood), Peggy Clutton (Station master’s daughter) and the Moore girls who lived nearby.

Whereas most local children stayed at Harston school until they were 15, Joan only went to Harston school until she was 11 because the education they received was felt to be poor. An ageing Mr Royston would just give them a book to read through and see how many of a certain word they could find. Joan’s friend Sheila Harvey was asked to do Mrs Royston’s needlework. Joan’s cousin Ted had to do Royston’s gardening. Because of this Joan and many of her friends decided to go to Sawston Village College; she went there with Maureen Northrop, Mavis Laman (who passed her Scholarship), Jennifer Bird and Janet Griggs from the Three Horseshoes. If you passed the scholarship exam you went into a different stream eg GCE at Sawston. Judith Gatward also went but she was older than Joan. Joan would cycle there on her bike going to Whittlesford and along the ‘Spicers’ path. If the weather was bad she would get the Granchester bus and change at Trumpington.

After leaving school Joan worked with her friend Sheila Harvey at the Burlington Press at Foxton.

Before Mike & Joan built their bungalow, their neighbours’ two bungalows had already been built by Bobby Bond who had married Cynthia Northrop (Maureen’s sister) and also bought the land off Bertie Northrop who had originally owned a large patch of land (10 acres) but gradually sold plots off for people to build on.

The Sellens had bought their land from Bertie Northrop and built a house nearby in Button End where they brought up two boys (one who married a Japanese lady and was a driver for the Beatles). Mr Sellen was an architect- he may have worked from home. Nora gave music lessons in her house.

The land that Mange Tout was built on was also originally Bertie Northrop’s. The Kemps lived there first in a caravan before they built their home- probably late 1950s.

Over the road at Apple Cottage lived the Baker family. Christopher was a chemist at Pest Control but when he retired he was outdoors all the time gardening and producing vegetables, providing produce, including potatoes for a shop in Mill Road, Cambridge. There were also apple orchards. Christopher’s wife Mabel was well known in the village for taking part in C.N.D. protests. They had two sons John & Tim, and two daughters Lucy and Judith, and later adopted David who was also known as Archie (and unfortunately died this year). John worked with Chas Simpkins running a lawn mower business and repaired motorbikes too. They operated from Linden Lea for quite a while then moved to Haslingfield where Chas built a house and workshop. When Chas died John took over the business. The late Phillip Baker used to live with his wife in a council house in Button End.

There were allotments on both sides of Button End. On the right beyond the last bungalow Warrens and Harold Northrop had plots there. On the left before Tony Gatward’s, Farrington had the first allotment, Tony Jackson had another and Warren one down at the bottom. Mike and Joan’s dad took over 40 poles on the large allotment area on the left, after Joan’s Uncle Bill gave up his 20 poles. 40 poles was a quarter of an acre. They grew gooseberries, blackcurrants and lots of potatoes- about 1 ¼ tons so they told Keith Crow’s dad – so they had to be carried in sacks back home on Joan’s bike. To prepare the ground they ‘pulled the drills out’. They used a motorised Merrytiller rotavator and plough share. They gave up the allotment when Joan’s dad had arthritis and also put their front garden down to lawn to make it easier to manage.

The Warren’s lived in the 1930s council houses at the beginning of Button End; next to them lived the Cox’s, then Aunty May Stittle, Joan’s aunt, another Warren and in the last one lived the ‘ditch’ man- can’t remember his name. In the two older 1920s council houses lived the Whitby’s and the Neaves. Joan used to play around there a lot in the 1950s with her friends. They used to play a game where they drew arrows as clues for others to follow and find you.

Nearby were the Wisbey’s gravel workings which were mostly hand dug but the last bit behind Oakhaven and the other bungalows was machine dug. In the 1960s the gravel diggings left boggy areas and ponds where they could see moorhens and other wildlife. Most gradually got filled in – Mike filled in some areas when he dug out his house foundations. Wisbeys had a gravel washer and used to make cement lintels and concrete posts. Mike used some to build their bungalow and also was able to borrow their cement mixer at weekends which their bricklayer used for their bungalow. On the other side of the road in the ‘Serotina’ plot were more gravel diggings that went back as far as the Apple cottage plot still does.

At sometime in the past around 1957/8 the road in Button End near the Rivers bungalow was widened and a path built with the Council taking bits from their front garden and that of Violet Cottage and Fleece Cottages. Bertie Northrop who lived in the latter asked for a brick wall to be built to clearly show their new front boundary

From 1960-1990 Joan worked with Iris Armstrong and Margaret Hancock running the playgroup for 3 years olds and over, at Harston House. They used to go in the music room where Iris played so children could sing songs, do the actions and dance. Iris was involved in other community activities such as working for the Samaritans- people knew they could contact her-  and collecting socks for men for a homeless charity. Iris’ husband Terence worked at the Polar Research. Iris & Terence had two girls and a boy.

When Joan and Mike’s sons were at Harston school the teacher was first Mr Shoote, then Mr Burroughs. In the mid to late 1970s Alan Ferguson was a teacher who was football mad. There were lots of boys in school in that age group who played football and the school team won the Championship. As everyone was keen Mike, along with Colin Jordan’s son Ian and Ted Stittle, started up a Harston kids football team on ‘The Park’ owned by Hurrells as there was no recreation Ground. They did up the pavilion and John Northrop did most of the ground work of the football pitch. Around the early 1980s Mike changed jobs and had to give up running the football but Eric Petitt came and helped out, as did Andy Parr’s dad, as well as Mike Luffman who took over as secretary. At the time Mike packed up they had an Under 16s, Under 15s and Under 13s team. At one time they also had an Under 14s and an Under 12s. They held some events to raise money for the football teams and once Mike got a Cambridge United goalie to come along for a sponsored penalty shoot-out with Mike’s seven year old son Simon taking the shots. The goalie saved a few but said afterwards he wouldn’t have tried so hard if he had realised they were sponsored on how many shots they won!

The last bungalow on the left opposite the Queen’s Head used to be owned by the Greenes whose housekeeper lived there. Harry Shipp’s wife worked for Harston House as a housekeeper. There was also a wooden shed studio for one of the Greenes to paint in. Behind Helen Greene’s house Joan remembers there used to be held Church fetes–you could see the event from the road.

In the High St there was Ayres grocers, with Miss Jacksons hairdressers next door one side, and a paint shop the other. Charlie Rogers sold green groceries from a shed next door to No 49 (now Hairs & Graces) which then used to sell sweets run by the Mumfords. John Northrop had a paper shop next to the Coach and Horses. As well as Harry Lawrance being a farrier he made a lot of lovely wrought iron gates.

In Chapel Lane Andraea’s used to sell flowers and vegetables from a shop.

Clearly seen from Station Road, partly where the Paddocks and school field now are, used to be a fair amount of glasshouses which grew carnations and other produce.