You are here: Home>Memories>Moore family memories 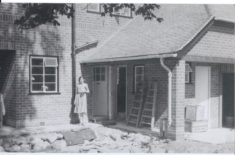 A young Mrs Moore during building of Birnam (now Tiptofts) 1939

The land to build Birnam on was bought in 1939.

Helen recalls: First of all, our house was called Birnam, after Birnam Wood in Dunsinane (as in Macbeth), where we spent part of the war when my father’s school, The Leys, in Cambridge, was evacuated to Pitlochry in Perthshire. The rest of the war my mother and we children spent in Derbyshire living with our grandmother. Our house was requisitioned for the war while we were away, and was, so my mother told me (Judith), inhabited by two ladies who worked hard there and planted vegetables, etc.

We didn’t grow our own vegetables (at Birnam). I do remember Mr Kenzie coming round with his van on Saturday mornings with provisions, and we children then chose our 4 ounces of sweets for the week. The butcher in Great Shelford remembered my mother well into the nineties. 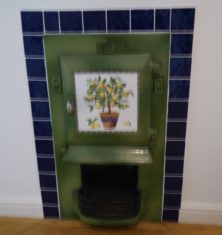 We did have a live-in maid, and the small bedroom and the small room off the kitchen were hers. The one we had before we went to Scotland, Beryl, wanted to come with us, but of course couldn’t. I remember my mother sending me out of the lounge to get more milk for tea, and Beryl, in her cap and apron, filling the milk jug and helping me back to the lounge with it. I must have been about 3. After the war we had no maid.

Judith recalls: Life in Birnam was much enhanced by the benevolent presence of Beatrice Plumb (Auntie Beat to Maureen Northrop but Mrs. Plumb to us.) She came 3 mornings a week to help my mother in the house; we all loved her and had many happy and some sad conversations with her over the 30 to 40 years that we knew and valued her. Most of those years she cycled over to work; for the last year or two my father used to fetch her in the car. She was wonderfully kind and tolerant in rather difficult circumstances at Birnam after my mother died in 1980.

One other thing, before we went away in 1941 to Scotland, I (Helen) attended, at the age of about 3, Mrs Celia Kendon’s nursery school, but have no memories of it. I only know because an elderly friend here looked after me there, and is still in touch with at least one of Mrs Kendon’s children. I don’t think Mrs Kendon was involved in a school after the war, because I used to go to her house as a teenager to “teach” her son Adrian the violin, and there was no sign of a school.

Judith’s account of some aspects of life in Harston long, long ago, i.e. In this case about 70 years ago! I came back with my family to Harston in Jan. 1946, having spent a few years as a young child in the war living with my grandparents and mother in the Midlands. I was nearly six at the time, and immediately started attending Harston School. I enjoyed school, and particularly remember a nice friend, Maureen Northrop.

Maureen was a friendly, pretty girl, and she used to come to play with me, my two sisters, Helen and Sheila, and the children Peggy and Howard Clutton, who lived next door. Their father was the station master, and the whole family were friendly and kind. I remember Mrs. Clutton coming round to welcome us on our return home.

Maureen and I and my younger sister Sheila used to play with the Cluttons in the spacious station premises. I don’t remember scary sallies to the engine shed as much as playing cricket in the goods yard! Since I think none of us were very sporty then or since, I expect Howard, the youngest and the only boy, probably took the honours in our games.

Helen remembers: We played a lot with Peggy and Howard Clutton, the stationmaster’s children. We played in our garden and possibly at the station – I can’t remember. Certainly we made up our own games. I suppose as the eldest I was in charge, but it’s all a bit vague. My father had bonfires in the autumn, and I loved those.

Our life was very ordinary and rather austere by today’s standards, with no clubs, boyfriends, rock concerts or anything like that. Just Children’s Hour on the wireless and concerts at the Royal Festival Hall in London. We all did lots of music. Not that it was unhappy, just very sheltered.

As I (Helen) was at school in Cambridge, I had no Harston friends, except the Cluttons, and had no life there, apart from being in at the founding of the local Girl Guide Group. We didn’t distinguish ourselves except for coming second in the county singing competition! I was captain of the Chaffinch Patrol – the only bird I could ever recognise, not being at all interested in flora and fauna.

Judith recalls: In earlier days, when we sisters were primary school age, a happy morning activity was to hitch a lift with June, who drove a pony and cart around the village to deliver milk. We lived next to the station, and the next stop or two after our house was on going up the hill to Newton. It was fun riding up the hill; when we arrived at Dr. Lindgren’s home at the top of the hill, we had to jump out and run back down the hill, so as not to be late for school.

Sister Sheila can still remember: Dr Lindgren and her husband Mr Utsi who lived in the chalet, called Sunbourne, up the hill just over the railway line on the way to Newton. Dr Lindgren was I think Swedish, and Mr Utsi from Lapland. He introduced the first herd of reindeer into the British Isles, I think in the 1950’s. They are still flourishing in the Cairngorms and appear from time to time on TV when it’s Christmas or there is some news item related. Mr Utsi I remember was very short with a wide face and twinkling eyes and big smile. He built a Lapp hut in the grounds of Sunbourne; it was a tepee shaped structure made from wood and he did it to make him feel at home. We never got to see inside it however. 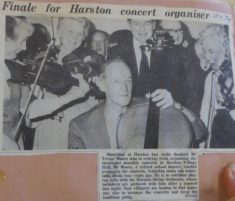 My mother was treasurer of the W.I., headed by Mrs Bisseker, wife of the headmaster at the Leys. My father did indeed run the local orchestra, but this was after my time and I had little to do with it.

Judith recalls: My mother Chris Moore was quite an active member of various organisations in the village, especially the Women’s Institute and the Over Sixties club. I think she helped to set the club up; she certainly helped to run it and then later was gently mocked by her family for still putting in the work when she was well over 60 – but of course so were other members of the committee. She loved gardening and flowers and was in good company in Harston; Constance Spry was a significant inspiration among the ladies of the village. At some stage late in the years of their residence in Harston, my parents were presented with two lovely glass goblets. My mother’s was decorated with a flower motif, and my father’s with a ‘cello!

Helen has mentioned that in our family we were all keen on music. Nearly 20 years after the (childhood) time just described, my father retired from teaching mathematics and immediately founded the Harston String Orchestra. He was a keen amateur ‘cellist. (He took up the ‘cello at the same time as he arranged for me (Judith) to do so: I was 8 years old and he was 40!) Well – he gathered the players, got hold of the music, organised music stands, arranged the hire of the village hall, found a conductor, and probably gave lifts to the hall for half the orchestra. He loved it all. Later it became the Barton String Orchestra and in 2001 moved its rehearsal venue to Cambridge under the name of the Cambridge String Players. My father, E.T. Moore, died in 1998; he would have been gratified that his enterprise had matured into a respected band of string players.