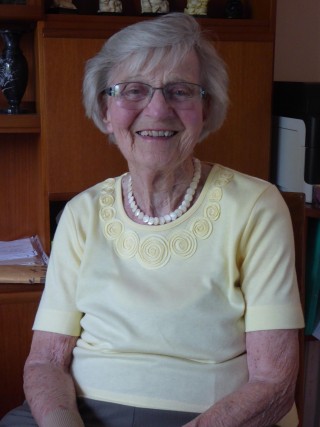 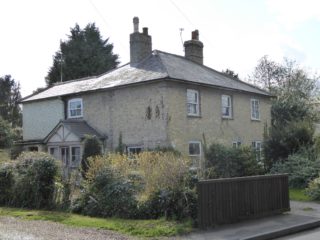 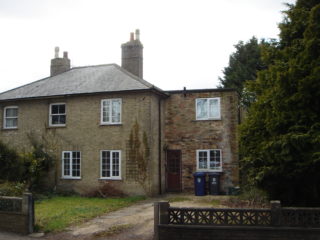 My grandmother Alice married Walter Bass (1874-99). She was widowed when my father Ronald was 3 years old, and she was expecting my aunt Vera. She went back to live in Church Street, initially with her father Josiah. She lived at 29 Church Street, earning her living as a dressmaker/tailoress in 1911.

On my mother’s side of the family was Albert Rogers and his wife Eva (Evangeline). They had two boys John and Alec, and lived in the terrace on the High St near the Post Office- in the 2nd or 3rd dwelling along. Albert had been badly affected by gas in WW1 and was unable to work much, but he looked after the village hall and did some work on farms.

My father Ronald Bass did an apprenticeship in bicycle repairs in Royston and then went to Ring and Harpers in Cambridge as an apprentice motor mechanic. He then became Chauffeur to Archdeacon Hurrell at Newton where my mother was housekeeper- in the Lodge Gate on Fowlmere Road. He started his garage/cycle business, where the present petrol station is, as Ron Bass Harston in 1926/7 and stayed until his retirement in 1957. He saw many changes in that time as cars were fairly new when he started. Petrol pumps were pumped by hand and wireless sets were run by Accumulator batteries. My father charged these up for people and one of my jobs as I got older was to deliver them to some elderly people in Church Street. I remember two lovely ladies who lived nearly opposite the church as Mrs Plumb and Mrs Miller.

When I lived in Church St there was no running water; we used the Fountain Cottage pump. We did get good water fairly early on. No 29 Church St was semi-detached when we lived there, although it had been one house originally. Because of this two bedrooms from each semi overlap. There was a front porch that served both houses (No 29 and 31 – see  photo where indicating where porch used to be) with front doors straight into the ‘Front Room’ as it was termed in those days and the room at the back was general kitchen come living room. My memory as a child was of a small lean-to kitchen added on to that and later 1950/1960 my father had a brick extension kitchen with a bathroom and bedroom above built.  The small side extension for a hallway and new stairs (instead of going up from the living room) was added probably late 1930’s. There was a big garden where we grew our own vegetables, particularly during wartime.

Beatrice, a daughter of Edward Ashby, trained as a school teacher and taught at Harston School. She also taught me for two years when I was ill and unable to go to school. I went to Harston School, then to the County (The Cambridgeshire High School for girls in Long Rd Cambridge) in Cambridge. I remember teachers Miss Jackson and Mrs Richardson, and also the school dentist!

As I was friendly with Pam Lawrance I would pop into the nearby forge after school run by Harry Lawrance.

I was seven years old when the War started so my early memories start from there. Black out curtains up at the windows, iron railings were taken down for war munitions, including around The Green and any spare kitchen utensils and metal that could be put to use were collected.

Aeroplanes flew constantly overhead as living in East Anglia we were surrounded by airfields and satellite fields. Bombers going out night after night and Dog fights overhead in the day. We as children didn’t understand and loved to watch but were quickly grabbed and brought in doors or taken to the Air raid shelters. Being in the Country we didn’t get heavy air raids but we had an Anderson shelter in the garden and I remember it as being half buried in the ground and covered with earth. It had wooden bench seats and we had a Primus stove in there to make hot drinks.

Other memories of walking to school and seeing soldiers on manoeuvres hiding in gateways (in Church St) with guns sticking out and saying hullo to us as we went past. Of army trucks, tanks, Bren gun carriers etc . travelling through the village day after day from Royston to Cambridge.  One memory is of Tanks with their tracks constantly pulling the Cats Eyes of the road. (The Cats Eyes were the guide to night time travel as there were no Streetlights or any lights were shown). Vehicles of any description had headlights with slatted shields over them to lower the light beam. The local roadman (who I believe was Elijah Northrop) living in Hurrells Row being to put it mildly “most put out” and we learnt some words we shouldn’t have! We witnessed this most mornings as we waited for our school bus into Cambridge as he had to put them all back in. This was all normal childhood to us and of evacuees coming to the village.

Harston had a large Army presence, Tents in the Park and Army vehicles parked under trees. There were many soldiers billeted in the village, especially at Pinehurst, on the left as you are going towards Cambridge. We had soldiers billeted with us in Church St, two from Scotland for some time and later two from the Derbyshire regiment. I also remember two other soldiers staying for a short time after Dunkirk with my mother who was a Red Cross nurse looking after them. I was not allowed to see them and at the time I did not understand. I have since realised that they were some of the evacuated from Dunkirk and were badly traumatised and exhausted.

My mother was in the Red Cross and went two days a week to Trumpington Hall that was used as Hospital/Convalescent Home. Several ladies from the village also went including Mrs Baker (who was in the WI with my mum). Mrs. Hayes from Baggot Hall Farm, Miss Smith from The Mill were two of them. I believe these two ladies were sisters. Mrs. Maria Hurrell, wife of Geoffrey Hurrell, I think was on the Organising Board.

Some other days of the week my mother helped my father at his Garage in the High Street serving Petrol and Oil and mending punctures, as his mechanic had been called up in the Army. No new Tyres, plenty of patches! In the War Petrol was rationed and you had to have Petrol Coupons for it. I remember my father sitting down on Saturday evenings and counting them and tallying them up with the Petrol he had sold. Restrictions were very tight. My father had an extra allocation of coupons for Special Hire car journeys for Doctors or Hospital appointments for those who were unable to use Public Transport. The war years saw many changes and restrictions. Engine parts were either hard to get or impossible to find but my father came from the engineering of making a lot of parts and mostly solved the problems. As Harston had a very high army presence during the war, the engineers often ended up in the Garage to work something out with my father.

Later came food rationing and queues for just about everything. Everybody grew their own vegetables and fruit if at all possible, digging up lawns and flowerbeds for extra space. As a child I didn’t really miss the lack of many sweets, bananas and oranges as nobody had them. I was too young to realise the implications of War. I remember the winters as being very cold and, as coal was rationed, fires were kept low.

Everything was hard to get, make-do-and-mend were the words of the day. Old jumpers unpicked, washed, carded and knitted up again. Dresses let out, bits added on the bottoms for growing girls, old coats, skirts taken to pieces, sometimes turned inside out and made into something new. A lot of knitting went on for the troops comforts – gloves, scarves, balaclavas and socks. The wool was provided by the Government and finished articles taken to somebody in the village — probably WRVS.

The Royal Observer Corps had a Watch and Listening Post on the top of Newton Hill, dug deep and built up with sandbags. My father and several other business men or men unable to join up for any reason did duties there. Some I remember as Mr. Frank Crow, Mr Deacon from London Road, Les Northrop, John Dixon from London Road and some from Newton. This was manned day and night. I sometimes cycled up on a Sunday to take my Father some lunch. I would go down some steps into the Post. It was interesting there with recognition pictures all round the walls of English and German planes. A viewing scope mounted on a swivel told the height and distance of planes sighted and a telephone was used to report Contacts to the Cambridge plotting centre.

In the latter years of the war the Italian and German Prisoners of War who lived in the Camp just outside of Trumpington worked on the Farms and cycled or were brought by trucks. One very clear memory I have was of an Italian prisoner who worked for Mr. Crow at Beech Farm climbing to the top of the Beech Tree by the gate on VE Day and placing a Union Jack flag on the top and it stayed there for months.

When the War ended and VE Day was Celebrated there was a big party in the Park. Everybody got together to provide food and there were races and games for the children and I imagine dancing in the evening for the adults.

I played badminton in the Village Hall with Betty Tanner from about 1945-55/7. I played tennis behind the village hall and on Graham Greene’s courts.

I worked as a Cartographer at the Ministry of Town and Country Planning in Cambridge and then as a receptionist at an accountants firm in town before mymarriage in 1955 (when I left Harston). I worked there for about 2 more years until the birth of our son. I retired on the same day as my dad, Ron..

Wilson’s started their garage in the 1950s and I worked with his sister. Vic Brunning was on the petrol pumps (not a Harston man).

Aubrey Northrop has a haberdashery shop to the right of Ayres grocery (at no 29 High St) and Miss Jackson had the hairdressers to the left.

There used to be a horse trough in front of the Queen’s Head.