You are here: Home>Topics>Harston Corona Virus lockdown experiences 2020>When Covid-19 changed our lives

When Covid-19 changed our lives 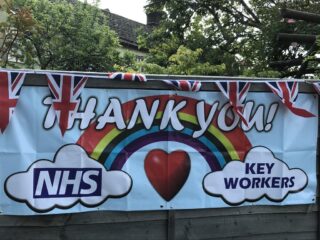 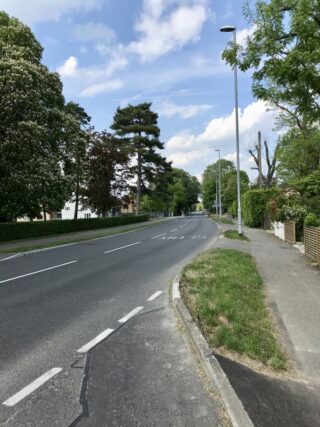 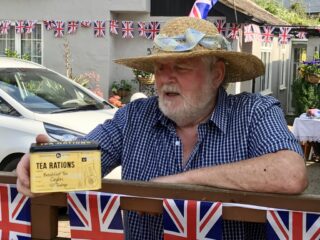 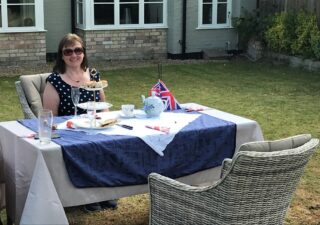 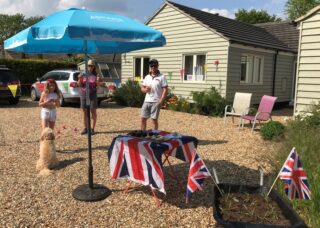 An extract from my diary : When Covid-19 changed our lives

VE day in Harston May 8

The Harston Residents Group had planned a VE Day 75 village picnic for the special Bank Holiday on May 8, but this has been put on hold. We did not want to abandon plans altogether, so we circulated through all our social media channels the revised national programme and ideas for celebrating in Harston – see attachment below. Fears that the day would pass in quiet isolation were unfounded. Several neighbours turned out for ‘clap the carers’ on Thursday and we agreed to meet at 6 pm on Friday to raise a glass together, and I delivered invitations along the road.

I went for a walk around the village on 8 May afternoon and found bunting and flags all over the place. Tea with scones and cream was underway in Chapel Lane as I sought out Val Joslin and had a ‘safe distance chat’ in her garden about her wartime and VE day memories. Her grandfather came home from WW1 and died of the Spanish flu. She and her mother moved to an aunt in Harston to get out of London where they were twice bombed out in the East End (Val remembered paving stones flying up and crashing through their roof). Her father who served in the RAF joined them here in a small cottage after the war, where they lived the rest of their life. Val was an only child – an outcome of the war’s disruption of family life.

I walked on, marvelling at the empty A10 which was reminiscent of wartime when people recalled playing football on the road. During the war there was little traffic except for tanks rumbling along (some of which were parked in the Drift where there was good tree cover).

Children’s rainbows which have been created in so many windows during the epidemic jostled with Union Jack flags, thanking past and present heroes alike. I discovered a ‘thank you NHS’ scarecrow in Station Road, and Brian Williamson leaning over his strictly isolating gate with ‘tea ration’ tin in hand. There were more tea parties with proper cake stands, scones and Victoria sponges, eaten in a front garden or on the pavement. As I walked along Church Street, I heard the strains of ‘We’ll meet again’ from a family group sitting down to tea together.

I set up a stool at the end of High Meadow with a vase of roses and WW2 songs playing on my iphone, and the residents all came out to join us. We chatted to people we had never met before and all agreed that we should do this again when we could meet properly. Nobody left until it was beginning to get dark and dinner called. It was good to have this sense of community and connectedness, and to hear how everyone was faring.

The BBC put on a great VE Day 75 show, including moving interviews with veterans in their homes, and an outdoor concert with a military band, all properly distanced, that ended with ‘We’ll meet again’. The Queen gave an address that hit all the right spots.

On a balmy evening of happy interaction where standing far apart seemed a little ridiculous, we began to think about emerging from our cocoon, and even venturing out to a shop. People are increasingly making their own interpretation of what is allowed.

We have not been to a shop for six weeks, and have not been able to secure a delivery from any of the main supermarkets. We have survived on a well-stocked freezer, Mindful Chef deliveries of main meal recipes each week, deliveries of fruit and vegetables from Bury Lane farm shop and the help of a kind neighbour who has added a few items for us to their weekly Waitrose shopping list.

The spectacular spring weather has continued. My weekly walk took me along the Drift, turning left across the fields to the Newton Road and into the village, returning along the road across the level crossing into Harston. Everyone I met smiled and nodded . I met a friend who pointed out the route from Station Road onto Rowley Hill which must be the highest point in Harston. I exulted in the hawthorn blossom bursting out in the hedgerows, the speedwell, catmint and dandelions along the verges, and most strikingly of all the empty roads stretching into the distance. There is much to lift the spirits on these walks, bringing to mind John Clare’s poetry and his intense observation of the countryside which resonate strongly during this time.