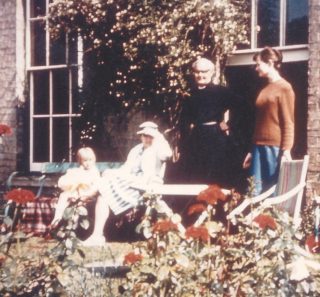 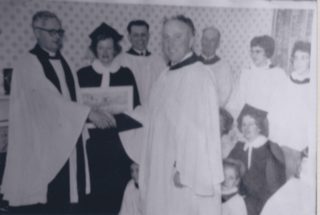 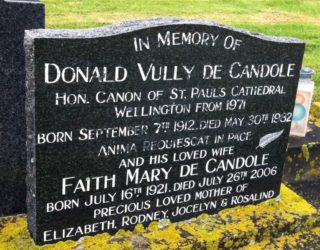 He was educated at Perse School, Cambridge, and Oakham School and studied for the ministry at Lincoln Theological College. He was ordained deacon by the Bishop of Lincoln in 1938 and went to New Zealand where he was ordained to the priesthood in Wellington in 1939.

He served a curacy at All Saints, Palmerston North until he joined the armed forces as a chaplain in 1941 serving in the Middle East at the 2nd General Hospital at Kantara, Suez Canal; with the 1st Ammunition Coy. N.Z.A.S.C. in Italy and with the 22nd Battalion in Italy.

At the end of the war, he was posted to a Repatriation Unit in England. On his return to New Zealand after the war he was successively Priest-in-Charge at St. Peter’s, Palmerston North, vicar of Waverley and from 1950-60, vicar of St Mark’s Carterton.

In 1960 the de Candole family returned to UK and he became Harston’s vicar in August 1960 until August 1965 when the family went back to New Zealand. The photo shows the De Candole family at Harston vicarage 1 July 1964 (Deacon)

He was Canon of St Paul’s Cathedral, Wellington, from 1971 until his death on 30 May 1982. He is buried at Waikanae cemetery, Wellington.