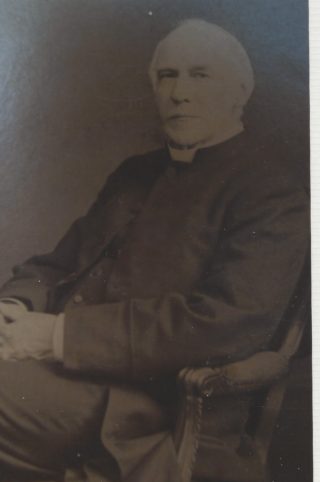 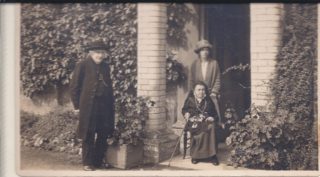 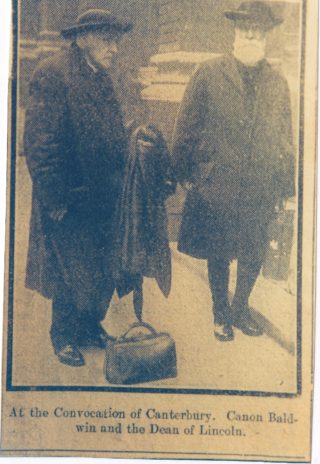 Canon Baldwin with Dean of Lincoln at Convocation of Canterbury
(Deacon) 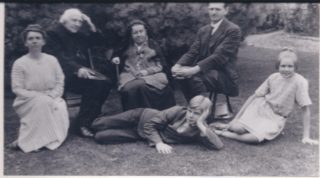 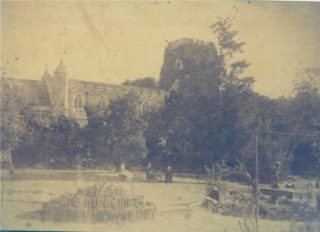 He married Caroline Maria Lowe on 20 January 1875 at Tydd St Mary, Lincoln. She died on 31 December 1927 and is buried in Harston churchyard. Local tales say that she was known as the Fen Mare! Also that she expected to be curtsied to. On one occasion a village girl refused, having been told by her father to curtsey to no-one but the Queen. Mary Greene  described her as ‘a wholesome terror of young evildoers, a perfect Sunday school  teacher, who dressed less well than a labourer’s wife‘

They had two children. Their son, Godfrey Theodore, was born 8 December 1882 and died on 15 August 1904. He is buried with his parents. His death was reported in the Cambridgeshire Independent Press on 19 August as ‘Death and proposed memorial at Tydd St Mary to the late Mr Godfrey Baldwin, son of Rev EC Baldwin, vicar of Harston, who drowned (verdict, accidental death, suspected heart trouble)  while bathing in the ‘South Holland’ at that village. He was an Oxford undergraduate’.

His first Sunday service in Harston was on31 March 1889 and his induction and collation followed on Tuesday 2 April.

Whilst his predecessor Rev Durbin built the ‘new’ vicarage, Baldwin soon set about altering it internally. He carried out alterations primarily to open up the house to more light, made doorways larger, connected the interior to the garden and created a ‘grander’ entrance hall by removing the study to the service wing. The ‘blind’ windows on the south and east elevations were opened up. A new doorway was formed on the east elevation and dividing walls removed- possibly to create a new study that could have a separate entrance (from the main one) for parishioners. He also ‘turned the garden into a veritable paradise’

Mary Greene in her unpublished book of memories recalls ‘the vicar was little more than 45 years old when we began to live at Harston and he looked 75. When he was 75 he looked no older. Now that he is over 90 he looks much the same, but bent. He was a good preacher and told good stories in his sermons and told them in such a dramatic way that we sat in our pews thrilled. He read the lessons with just the right proportion of simplicity, reverence and drama. He was a great reciter of scenes from Shakespeare – gramophone records were taken of his rendering of some of them. He insisted that the room should be thoroughly blacked out when he offered to recite to the WI. We had to remind everyone not to cough or sneeze – if anyone made the slightest noise he would stop reciting’

Harold Northrop remembers ‘we never had such things as bicycles until we were old enough to work and then it had to be on a credit system of so much each week. I was 13 years old before I could ride a bike and lots of children at this time never did ride a bike throughout their lives. The only chance one or two of us had to learn was when we were required to take the Rev Baldwin’s cycle to the station so that when he arrived now and again by train he could cycle back to the vicarage’.

He continued the support for the reading room established for his predecessor and as reported in the Cambridgeshire Independent Press on 17 February 1893 was a supporter of the newly founded Cambs Village Club & Reading Room Association.

As reported in the Cambridgeshire Independent Press on 8 June 1900 he was one of over 9000 clergy supporting ‘The Romeward Movement’ in the Church of England. He was categorised as ‘adopts an eastwards position, ceremonially mixes the water with the wine, uses sacrificial vestments and burns candles in daylight.

In January 1914 Rev.Baldwin (with his wife) took on a chaplaincy in the south of France for several weeks; Rev. Wilkinson acted as locum.

Clearly a disciplinarian, it is reported that when a local lad, Reuben Seagrave, rolled his hoop into the vicarage garden and accidentally knocked down one of his children, Rev Baldwin hauled him before the Courts and, at his instigation, had him birched.

Perhaps Rev Baldwin’s character can be gleaned from his writings in a notebook intended for his successor which is now held in the Cambridge Archives:

‘I had written a somewhat full account of my various predecessors for a century or more but the subject is not edifying. My latest predecessor however was a kind hearted hospitable man (of whom the late organist remarked ‘He was a perfect man, he never interfered with anything’). He was a genial kind of squarsin, a very moderate low-broad churchman. Such a thing as any service before breakfast was unknown within the memory of man. I could find no proper linen at all except a table cloth & napkin – not even a purificator. The Holy Table – its covering I destroyed by fire. Of course there were no altar candles, cross, wafers, etc. The plate (Victorian & Georgian) was impossible for a reverent Administration so with the consent of the Bishop, I had them melted down but preserve the ‘In Memorium’

As to the people I have found them for the most part friendly (of course now in 1923 everybody is perfectly friendly so far as external behaviour can show) but the late curate-in-charge was perhaps not very far wrong when he wrote to me ‘The Harston spirit is very obstinate in making changes. I have found it so since I have had to do with them. If one raises an objection, all the others agree’ It’s a matter of fact however I made very serious changes immediately I took charge in 1889 ( such as a weekly celebration with linen vestments, unleavened bread, mixed chalice, eastward position, weekly children’s service & catechising & lighted altar candles as soon as I could procure them. The only result that I could see – though the late curate told me that if I adopted the eastward position ‘the people would not attend’ – was (1) that the communicants almost immediately doubled and (2) that one old lady (who afterwards became most friendly) declared that I was ‘a regular Pope’. The people soon found out that I was very far indeed from being a Papist & that true Catholic doctrine was something much better than modern Popery.

The church school alas was given up 14 years before I came here – for 5 ½  years I had the children of the church parents daily in the church at 9am for about half an hour, the roll call at the Board school being deferred, for them, till 9.40. The story – the iniquitous story of the manner in which this was stopped is too long to be told here. Moreover the chief instigator of the plot is dead – (nobody knows the full secret of the whole business except myself. The wife & daughter of the man were quite innocent. He, poor fellow, had a truly diabolical temper – in fact was as a madman). The facts, if made known would be thought incredible’.

Rev Baldwin resigned his post at Harston in 1924. In March 1939, Harston parishioners marked the fiftieth anniversary of his arrival in Harston by sending a gift of some books.. He died on  22 October 1941 and is buried in Harston churchyard.