Harston vicars in the 21st Century

Nick was born in Wiltshire in 1958 and graduated at St John’s, Cambridge, in Classics & Theology in 1981. He was first a teacher of children with special needs in Bedfordshire and later taught Biblical Studies at a theological college near Jos, Nigeria. He gained his Certificate in Theology for Ministry at Ridley Hall in 1993.

He was Assistant Curate at Holy Trinity, Cambridge, for four years and then Assistant Priest for Fulbourn and Gt & Lt Wilbraham and Anglican Chaplain to St Bede’s school before moving to Harston as Vicar. He left Harston in April 2003 to take up the post of Vicar of St John’s Great Horton, Bradford.

Peter joined a firm of surveyors in Reading on leaving school and qualified as a chartered surveyor in 1967. He studied at Kings College, London, and Ridley Hall, Cambridge, before being ordained at Guildford Cathedral in 1975. He was non-stipendiary minister at St Mary’s Wendover & St Michael’s Halton before coming to Harston. Peter left Harston on retirement to Wiltshire. 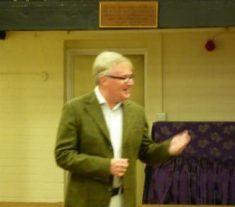 Richard lived in the village for nearly 25 years and served the church firstly as churchwarden, then curate and finally Associated Priest. As such he served during the time of Fraser Watts (1991-94), John Parr (1995-99), Nick Jones (2000-03), Peter Wainwright (2005-10), and Brigid Hadfield (2011-18) and he held the fort during three vacancies which occurred during his time.

Richard held a non-stipendiary post and continued his career in publishing. He left Harston to become Assistant Priest of the Nar Valley Group (Norwich). He is seen here at his farewell do in Harston.

Brigid had an eminent academic career with a background in law, having lectured at Essex University and at Queen’s, Belfast and has written a number of related books.

She was then appointed as Priest in Charge in the benefices of Harston, Hauxton and Newton where she spent 6 ½ years working tirelessly in all three parishes. She was an early riser and locals used to see her walk daily to the shop for early morning paper. She quickly became a familiar figure and rapidly got to know her flock both in church and when out and about in the village, often stopping for a chat on the High Street.

In the great tradition of the Church of England her ministry encompassed the whole community, underlining her often spoken belief that the church is there for all – whether regular church-goers or not.  She has always been deeply committed to her pastoral role, and has been an ever-present help in trouble to the sick, elderly and bereaved as well as welcoming engaged couples and new parents for weddings and baptisms.  Having maintained contact with one family after a funeral she established visits from their brass band to the church.

Her regular visits to Hauxton School were also popular with the younger section of the community.  She was also very interested in helping others with their family history research linked to church. 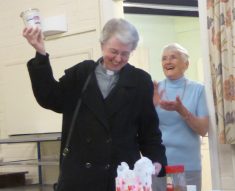 Her commitment to the future is embodied in the energy which drove the building of the Norman Jones Annexe.  Early on she identified the need for a service annexe in Harston Church with a toilet and servery to enhance the possibilities of holding services and other events.  This was a major project opened in October 2015 by Terry Waite, former aide to the Archbishop of Canterbury, who was taken hostage and held in The Lebanon for five years.  The annexe, on the south side of the church, fits harmoniously into the 15th century building.

Brigid regularly attended the Over 60s Lunch Club in Harston Village Hall on a Monday and is well-known for her advocacy of proper custard! At her Lunch Club leaving do on 15 March 2018 she was given a bag of gifts with special significance – tins of custard & tomato soup! She always liked a good helping of these at lunch club!

She retired in April 2018 to live at Seaford on south coast where her brother resided.