You are here: Home>New contributions>Harston vicars in the 17th century

Harston vicars in the 17th century

In the first quarter of the 17th century Harston church had a succession of short-term, fellows of Cambridge colleges, including Matthew Wren about whom there is a separate post. Stability arrived in the form of Robert Wallis who served for 60 years and was married & buried at Harston and his successor Edmund Dickman who served for nearly 50 years, well into the 18th century. There is a separate post about Rev Dickman. 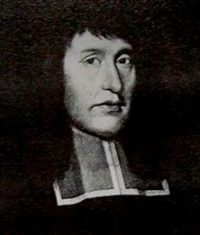 James Wedderburn was the first of the two Scotsman to serve at Harston in James I time. Like his predecessor Matthew Wren (see separate post), his career had highs and lows after Harston, mainly due to his support of Archbishop Laud.

He was born in Dundee in 1585, and was the second son of John Wedderburn, mariner and shipowner, and Margaret Lindsay. He was educated at the University of St. Andrews gaining his MA in 1608. Although no records have been found, he probably continued his studies at Cambridge as he became Rector of Harston in 1614. ln 1617, he was appointed Professor of Divinity at St. Mary’s College, St. Andrews, and gained his Doctorate of Divinity before 1623.

In 1626 or 1627 he was appointed rector of Compton, diocese of Winchester, and shortly afterwards was made canon of Ely, vicar of Mildenhall and prebendary of Whitchurch. He became Dean of the Chapel Royal, Stirling, in October 1635 and Bishop of Dunblane in February 1636. All these posts held whilst still rector at Compton which perhaps reflects the regard in which Archbishop Laud held him.

In 1637, at the express wish of Charles I, Scottish bishops including Wedderburn, completed the Scottish version of the Book of Common Prayer, frequently referring to Archbishop Laud for advice. This led to riots and the king withdrew the book in September 1638, but it was too late to stem the tide of public opinion. In November a General Assembly met in Glasgow in defiance of Charles I, deposed the Bishops and re-established the Presbyterian system.

James Wedderburn was removed as bishop and excommunicated by the Assembly because he “had been the confidential correspondent and agent of Archbishop Laud in introducing the new liturgy and popish ceremonies”. He fled to England with other Scottish bishops and found protection Archbishop Laud; but he did not survive long. He died, unmarried, at Canterbury on 23 September 1639, and was buried in the chapel of the Virgin Mary in the cathedral.

Walter Balcanquhal was born in Edinburgh about 1586, the son of Walter, a minister of St Giles, Edinburgh. He gained his MA at Edinburgh in 1609 and his BD and DD at Pembroke college, Cambridge in 1616 and 1621. He became vicar of Harston on 29 November 1615 until 8 March 1617 when he moved to Waterbeach. He then held several posts in Kent and in 1639 was made Dean of Durham.
In 1638 he revisited Scotland, as chaplain to the Marquis of Hamilton, the royal commissioner. He was very badly received and on 29 July 1641 he and others with him were denounced by the Scottish parliament as ‘incendiaries’. He retreated to Oxford and shared the waning fortunes of Charles I. He died at Chirk Castle, Denbighshire, on 25 December1645.

John Jefferay was born at Shereford, Norfolk, in 1588, the son of William, a gentleman. He entered Caius college in 1605 where he gained his BA in 1608. He became vicar of Harston on 8 March 1617. He was vicar of Gt Easton, Essex in 1627 and of Ramsey, Essex, from 1628-39. Whether he was vicar at Harston until 1627 is not definite. Records show John Johnson, George Langdale and William Fenner (see below) as Harston vicars during this times

George Langdale was born in Buckinghamshire and educated at Eton before entering Kings college 1613 where he gained his BA in 1618 and MA in 1621. He was ordained deacon and priest in London) in 1619, age 24 where he was Chaplain to the Earl of Northumberland.
He was rector of Newton and vicar of Harston in 1624, later becoming vicar of Chippenham where he died in 1640.

William Fenner entered Pembroke college in 1612, gaining his BA in 1616 and MA in 1619. His BD was gained at Oxford in 1627. He was vicar at Harston for a very short time in 1625 before becoming vicar of Sedgley, Staffordshire until 1627 and then Minister of St Peter’s, Ipswich. He was Rector of Rochford, Essex, 1629-40 where he died age 40 as shown in picture to right.

He was a prolific Puritan author and his writings enjoyed popularity for some time, being described as plain in manner while zealous in tone.

Robert Wallis was born in Kings Lynn in 1599 (baptised there 24 January), the son of John Wallis, a merchant.

It is recorded that the only rooms furnished in his house were the hall, study and 2 bedrooms and then only poorly furnished. (College Dons & Country Clergy W M Palmer 1912 CAS paper)

The Ely Diocesian Records he is also he schoolmaster in 1665.

He was vicar at the time that William Dowsing visited the church and destroyed 12  stained glass windows (‘superstitious pictures’) and a brass inscription.