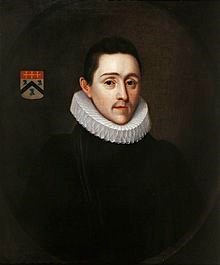 Matthew Wren was born in London on 23 December 1585. He attended Merchant Taylors’ School and then Pembroke Hall from1601. He gained his BA in 1604, was elected fellow in 1605 and gained his MA in 1608. He became deacon at Harston on 20 January 1611 and vicar on 10 February 1611, one of nine Cambridge graduates who were Harston vicars between 1607 and 1626. So far we have not found any written accounts of his time in Harston. His rise to fame, then fall, then rise again all occurred after this.

In 1621 James I appointed him chaplain to Prince Charles who he accompanied to Spain in 1623. He held office at Winchester in 1623 and Bingham, Nottinghamshire, in 1624. He was Master of Peterhouse from 1625 to 1634. From this point, his rise was rapid. In 1628 he was installed dean of Windsor and Wolverhampton and Charles I made him chaplain and Clerk of the Closet. He accompanied Charles I to Holyrood Palace for his Scottish coronation in 1633. He was elected Bishop of Hereford in 1634, Norwich in 1635, and Ely in 1638. Throughout this period he strongly supported Archbishop Laud and his toughness on Puritans. Wren’s own words describe how, in less than two years and a half, he had roused the puritanism of East Anglia to a ‘dangerous pitch of rebellious fury’.

His support for Laud who had been imprisoned in 1640 (and beheaded in 1645) led to him being imprisoned in the Tower of London in 1641 after the Commons decided he was unfit to hold any office in the church or commonwealth. He was released in 1659 but was not allowed to return to his palace, but lived in lodgings till the Restoration. He was restored as Bishop of Ely in 1660.

While in the Tower, he vowed to devote a sum of money to “some holy and pious employment” should he be released. To fulfil this vow, he spent over £5,000 building the new chapel at Pembroke Hall which was finished in 1666, designed by his nephew Christopher Wren – one of his first buildings.

He married Elizabeth, daughter of Thomas Cutler of Ipswich on 17August 1628. He died at Ely House, Holborn, on 24 April 1667, and was buried in the chapel he had built at Pembroke Hall.