Harston vicars in the 20th century 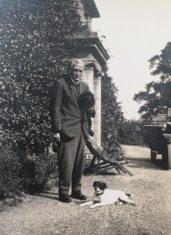 Frank Davisson was born in Chatham in 1877 and graduated from Lincoln College, Oxford.  He married Alice Louisa Andrews on 21 Jan 1914 in Stoke Newington where he was a clergyman. He joined the Royal Army Chaplaincy Department as a Reverend serving in France. After the war he served in Enfield before becoming Harston’s  vicar,

He is shown in the electoral registers as living in Enfield 1920-25 although Harston church records show him starting here on 3 Mar 1924 when he succeeded Rev Baldwin  Curiously the electoral register for Harston for 1920 shows him and Alice living in the Vicarage but the Baldwin family are not there. I wonder if he came up here in 1920 as temporary cover for  Rev Baldwin and then moved here as permanent vicar in 1924. He died in St Albans on 1 October 1960. 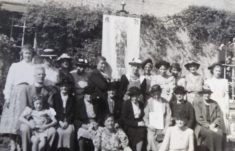 Leonard Askham served with the Churchmen’s Battalion of the King’s Royal Rifles in France in WW1. After the war, he studied at Knutsford and then Keble college, Oxford (1922-25) and Ely Theological college (1925-26). His first curacy was in the London dockland area and he was appointed vicar of Godmanchester in 1937 and chaplain to the Mayor of Cambridge in 1939. In 1942 he took up the post of rector of Ashover, Derbyshire. He became vicar of Harston on 25 October 1945 and moved to St Peter’s, Barton, in 1954. Until Lennard Askham came to Harston it was much more High Church – more rituals like Catholics.

He married Grace Hilda Mallet in 1935. She died in 1952. Their daughter Janet (1941-2008) was a medical sociologist who did much work with Age Concern. He married Mary Lawrance, daughter of one of the Harston blacksmiths, in 1955. They had two sons. Both his wives, in turn, strongly supported a thriving Mother’s Union group – photo above with Rev Askham and daughter to left.

Fraser Watts graduated in 1968 and pursued a career in clinical psychology. He eventually trained for ordination at Westcott House and the Faculty of Divinity, Cambridge, and was ordained in 1990 at the age of 44. He became Priest in Charge at Harston in 1991, only a few months after becoming a Priest. He held the post on a non-stipendiary basis whilst combining it with his work at the Medical Research Council. He left Harston in 1995 to become vicar-chaplain at St Edward King and Martyr, Cambridge, until 2013. He was also honorary canon, Ely Cathedral, 2008-13.

John read Physics at Oxford and then trained for the ministry in Bristol where he also studied for a degree in theology. He was ordained in Liverpool and served 8 years in three parishes- Crosby, Walton and Wigan. He then moved to Cambridge to teach at Ridley Hall theological college.

He came to Harston in January 1995. The photo shows him in 1996 walking in front of the old bier next to Brian Willers – the undertaker – one of the last times the bier was used.

He left Harston in March 1999 to take up the post of Canon of St Edmundsbury and Continuing Ministerial Education Officer for St Edmundsbury & Ipswich.