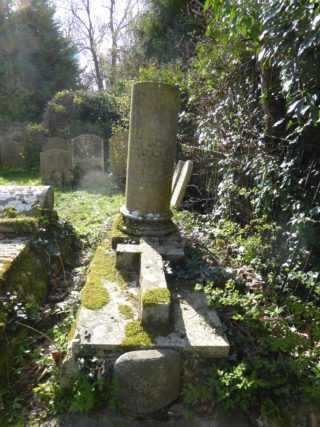 Frederic Jeanes Durbin was born in Newland, Gloucestershire, the son of Joseph Jeanes Durbin. He entered Trinity college on 2 April1834, gained his BA in 1838 and MA in 1855. He was ordained deacon in 1840 and priest in 1841. He was curate of All Saints’ Chapel, Huntspill Forest, Somerset, before becoming vicar of Harston on 30 September 1848.

Sarah died at Harston on 26 May 1891. As reported by the Cambridge Independent Press on 6 June she was interred in the family vault in the parish churchyard. The chief mourners were, Miss L. Durbin; Miss A. Durbin; Miss Cooper, Reverend, J. Hamilton, the house servants & others. Nearly every shop and house had their shutters up & blinds drawn. The coffin was of polished oak with an inner lead lining & elm shell. The funeral arrangements were made by Mr F. Willers of Harston.

His daughter Elizabeth remained in the village, living in Walton Cottage on the High Street until her death. She died on 27 September 1919 and was interred in her grandmother’s grave, next to that of her parents. The Cambridge Independent Press of 3 October carried the following obituary:

On Thursday 25 September when willing hands were decorating the church for the harvest thanksgiving, the bell was tolling for one who had always been a helper and who had passed to her rest – Miss Durbin. Her special part was the desk and lectern and she had always dressed them very carefully with flowers and fruit. She has been a very familiar figure in Harston where she came as a small child with her parents in 1848. All respected and esteemed her. Her health had been failing for some time, since an attack of jaundice in the spring, but the end came suddenly. She was downstairs the day before her death. The funeral took place last Saturday and was attended by relatives and many village friends. Many lovely flowers covered the grave.

On his arrival he refused to live in the vicarage, finding a Tudor building that had fallen into complete decay fairly early in the eighteenth century. He was responsible for the building of the new vicarage and gardens in 1849.

When the school room at the old bakehouse became too small around 1860, he acquired land from Jesus College to build the school house and two classrooms at what is now 20 Church Street. He arranged for two sisters to come over from Ireland.

In 1866 a new reading room was opened in Harston, ‘affording the mechanic & labourer the opportunity of seeing the daily & weekly papers’. Rev Durbin was one of the main supporters along with & H Hurrell who provided the room. He also chaired entertainments in the room with readings & songs

Also in 1866 Rev Durbin embarked upon a programme of restoration of the church after saying that the high pews made it resemble a cattle market. The works included replacing the pews; repairing the roof; renovating the old oak pulpit and moving it from the west arch to the north side of the chancel arch; installing a new reading desk on south side with carved oak bench behind; reglazing windows with (mostly) plain glass; cleaning and re-plastering walls; providing a new carved rood screen with the Ten Commandments, the Lord’s Prayer and the Apostles’ Creed in the Elizabethan character with illuminated capitals; and providing new bible texts over the altar (fashioned by Mrs Durbin). The woodwork was installed by Mr Joseph Stubblefield of Newton, the stone by Mr Clayton of Cambridge and the plastering, heating etc by Mr Jude of Harston. The work took 3 years and cost £500.

By the late 1870s the vicar established a second reading room in the old school once a larger, new school had been built.

Crimes against the vicar

Rev Durbin seemed to attract a number of ‘felonies’ against him if newspaper reports are anything to go by!

Willis Chandler, shepherd, in the employ of Mr Long of Harston, was apprehended under warrant by PC Turner while stealing 3 flower pots from the garden of the Rev FJ Durbin, sentenced to 21 days hard labour.

George Knivis of Haslingfield, aged 14, was charged with assault of 2 other boys, namely Arthur Covill and William Cornell of Harston. However the real complainant seemed to be the Reverend  Durbin, their employer, who had been greatly annoyed by boys bathing and chasing his cattle. The assaults took place on one of these occasions but were of a trivial nature They had been brought forward more with a view to stop the annoying practice than anything else. The defendants were fined 2s 6d plus costs, and 6d plus costs respectively. (A third charge of cruelty to a horse was dismissed through insufficient evidence).

Rev Durbin died on 15 November 1888 at Harston vicarage, aged 73. As reported by the Cambridge Independent Press on 30 November, the funeral service at Harston was conducted by Rev Canon Waldon. The mourners included his 2 daughters, Misses L and A Durbin, Mr Scott Durbin, the house servants, many local vicars and villagers. The body was borne to the grave by members of the choir. The coffin which was of polished oak with brass furniture was placed in a brick vault at Harston church by the undertaker Mr F Willers.