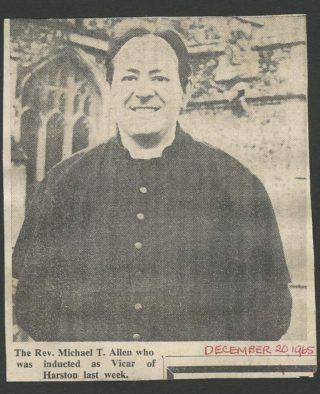 Michael Allen was Harston’s longest serving twentieth century vicar and would have served longer had it not been for a series of strokes which forced him to retire in 1991.He  was inducted as vicar of Harston on 20 December 1965 (WI Scrapbook}. Sunday 27 Oct 1991 was his last Sunday service, a joint parishes sung Communion. This was followed by a presentation lunch at Harston. He died in October 2004 and some of his ashes were buried at Harston by the eastern end of the church after a service of thanksgiving on 8 November.

Desmond January wrote in the Parish Magazine in December 2004:

‘Michael always enthusiastically presided over and took part in all celebrations as he did in numerous plays, church fetes, harvest suppers and the host of other activities which took place during his long ministry

Indeed for over a quarter of a century Michael ministered to those in his pastoral care in many ways which were not publicised. On numerous occasions he could be seen on his moped – with cassock flying (earning him the nickname ‘bat-man’} – and often on a pedal cycle in all weathers, rain,snow and ice, and at all hours, making his way to Cambridge to visit sick parishioners.

Many services he celebrated quire alone in church, saying the full office – although he would say he did not feel alone but sensed a host of long departed worshippers thronging the church around him – who can say that this was not so? We all have our own special memories – I have many particularly during my eight years as churchwarden.

Whether Michael can be numbered among the Saints we cannot say, but I believe he came close to being so as any one I am ever likely to encounter. So let this be regarded as an occasion for  thanksgiving for the life and friendship of Michael. I believe he earnestly served aand sought his Creator and will indeed find his reward. Amen.’

‘Michael Allen was married to Marion and they had 2 school-age children, Frances and John. We became friendly with them because they were our near neighbours, and also from church-related activities. Michael was rather shy with strangers and was a proficient mathematician; he preferred the high-church ritual and offered the healing power of ‘laying on hands’, thus helping many sick people of the parish, during his pastoral work. He fostered joint services with the Roman Catholics, and Hauxton Church had a joint service with the Catholics for many years.

He was a keen home-made wine maker and the Harston vicarage (now Rhee House)’s cellar had an amazing cornucopia of home-made wines – dandelion, blackberry, banana, tea – you name it! (He regularly attributed the success of the vicarage garden blackberry crop to its proximity to the vicarage’s cesspit – these being the days before piped drainage in Harston!) One of his favourite stories was of an elderly (and rather deaf) parishioner who had replied to his enquiry ‘How is your husband today?’ with the response: ‘Very Windy – nearly blew me out of bed this morning’!

…. I remember chiefly of him, that his arrival was ALWAYS unannounced, always a delight and always welcomed. As I look back, I can still seem to see him at the front door; his long cassock and the old bicycle, despite the fact that we have never been, what one might call ‘staunch church-goers’ At that time, I was doing an interview programme called ‘Reflections’ and he directed me towards, Stewart Jordan, a veteran of ‘the Somme’ It became easily, one of the best interviews I ever presented. I was most grateful him for the introduction. What always made us grateful to him was the fact, that he seemed to think he didn’t need to arrange to come, and he truly didn’t. He arrived. melded in with whatever we were doing and over a cup of tea ‘contributed’ as he felt appropriate. If we were in the middle of some domestic or other crisis, it seemed to become easier by his presence. I recall, after we lost those lovely visits, thinking of some of the words of the hymn, “Dear Lord and Father of Mankind” The final verse, I am sure you will all know, as well as me, reads, “Breathe through the heats of our desire your coolness and your balm; let sense be dumb, let flesh retire, speak through the earthquake, wind and fire, O still small voice of calm, O still small voice of calm.” Oh, how we have missed that ‘still small voice of calm’ over the years. Thank you Sir.