You are here: Home>New contributions>Harston vicars in the 18th century

Harston vicars in the 18th century 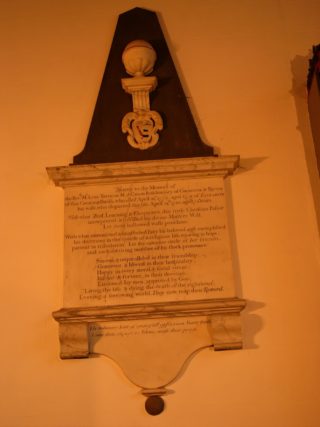 Most vicars of Harston in the 18th century follow a similar pattern. All are educated at Cambridge colleges; most hold the Harston post early in their careers, often before finishing at college; most stay for only a few years; none are buried in Harston. Below are a few details of the Harston vicars from 1735 – 1796.

Luke Trevigar was born at Sunbury, Middlesex, in 1705. He was educated at Charterhouse school in London and was admitted to Clare college on 4 April 1723 where he obtained a BA in 1726/7 and an MA in 1730.

He was vicar of Sawston from 1731 – 35 and became vicar of Harston on 30 September 1735 until 18 February 1738 when he moved to Sussex. He was Canon of Chichester when he died 18 April 1772.
A wall mounted monument in All Saints church, Hurstmonceux records “with what zeal, learning and eloquence this truly Christian pastor interpreted and fulfilled his divine Master’s will. Let these hallowed walls proclaim”.

Charles Plumtre was born in Nottingham on 16July 1712. He was admitted to Clare college on 1 April 1730 (the year his predecessor at Harston, Luke Trevigar, left the college). He gained his BA in 1733/4 and his MA in 1737 but from Queens college

He was appointed vicar of Harston on 18 February 1737 until 4 November 1745 when he became rector at Wimpole. The marriage register of Queens College records that on 26 Oct 1743 he was the officiating minister at the marriage of Thomas Simons and Esther Webb, both of Harston (before the Marriage Act of 1753, it was legal to be married in a college chapel). When he died suddenly on 13 September 1779, he was Archdeacon of Ely, rector of St Mary Woolnoth, London and of Orpington, Kent. He is buried at St Mary’s, Nottingham

He was appointed vicar of Harston on 4 November 1745 where he remained, unmarried, until his death on 19 March 1775

From 1795 until his death on 24 May 1816 he was vicar of St Mary Abbots, Kensington, given ‘as a reward for his piety and worth’ and one of the most fashionable and prestigious livings in the country.
He was said to have been extremely beloved in Kensington where at his funeral ‘every shop in the parish was shut and every parishioner whose means would allow it appeared in mourning’.

In his will Richard directed that he should be buried ‘with the smallest expense consistent with decency’.