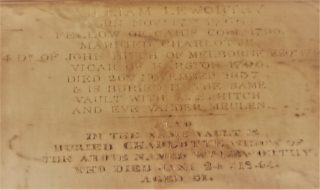 He married Charlotte, the daughter of John Hitch of Melbourn in May 1793, the year in which he became curate of St Mary’s, Sutton, Lincolnshire.

He served as vicar of Harston in 1797 until his death in 1837, thus being one of our longest serving vicars. He also served as Cambridge Justice of the Peace.

He is described in  ‘A History of the County of Cambridge and the Isle of Ely: Vol 8’  as being more diligent than his predecessors. He lived at his vicarage for eleven months of the year, held two services every Sunday, preaching at both, and catechized the Sunday-school children regularly in summer. Regular attendance at communion rose from 12 in 1807 to 18 by 1825. He largely rebuilt the vicarage around 1800.

In 1810 he wrote letters to Parliament supporting London – Cambridge canal passing through Harston. He said 1 horse & 3 men on canal could move the same as 60 horses & 10 men by waggon.

He was also keen to support the Conservative cause as this report in the 27 July 1832 issue of the Cambridgeshire Chronicle & Journal records that he was one of the:

Supporters declared for Captain Charles Philip Yorke, R.N., as the electoral candidate to represent the County of Cambridgeshire & Isle of Ely in Parliament (after) the approaching Dissolution, pledging to use every possible exertion to secure his election.

He seems to have been something of agriculturalist; the above volume states that “the amount of wheat sown had increased slightly after inclosure, when the vicar, William began farming his new glebe intensively, bringing from Doncaster a four-horse threshing machine, fitted with a winnower and chaff cutter. He grew turnips for sale at London and experimented with draining and lime composts. In 1817, however, he gave up farming. By then the Jesus College farm was under a six-course rotation, including a fallow under turnips, barley, two years of clover, pulses, and wheat”.

He also seemed to favour shooting game and reports in the Cambridge Chronicle & Journal for the 7 years 1813 – 1819 show that he, amomgst a few other Harston men were issued with General Certicates for Killing Game.

Charlotte Leworthy died on 24 January 1845. She rests with William  (who was interred on 7 December 1837) in a vault in Harston church, the only Harston vicar recorded as being interred inside the church