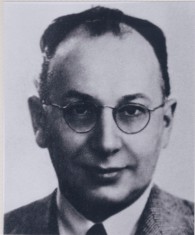 Dr Walter Eugene Ripper was born in Vienna in 1908 and gained his PhD there in 1930. He left Austria and moved to America where he worked for the US Department of Agriculture, working on biological control of pests from Europe which had become established in the USA. He moved to England where, together with Sir Guy Marshall, he embarked on the pesticidal control of insects.

Although not a long-term resident of Harston, Dr Ripper had a significant effect on the village and its residents because of his connection with Pest Control Ltd. The company, in its various guises provided employment for Harstonites for over 70 years until its closure in 200?. While under his control, the company built the six ‘Pest houses’ for company workers in 1946. These are No’s 108-118 High Street, Harston.

During the war years he lived at Sunbourn on Newton Hill which he rented from the Lindgren family. He also lived at Ravenstone on the High Street.(Does anyone know where this was?)

He founded Pest Control Ltd in 1938 at Hauxton, although for some years the company address was Harston. It was here in 1940 that he introduced the first synthetic selective herbicide to Britain. The company was absorbed by Fisons in 1953 and became Fison Pest Control Ltd, where Dr Ripper was vice-chairman until 1958.

In the 1950s he moved to Norfolk as managing director of Dow Agrochemicals (1958-1962) and built a factory at Kings Lynn. He lived at Docking where he was a farmer and landowner. The Docking village hall is dedicated to his memory.

He left Dow to concentrate on running his spray contract business in the Sudan. It was while piloting one of the company’s planes on 21th March 1965, on flight from Athens to Naples, that Dr Ripper was killed when the plane crashed on a remote mountainside about 40 miles west of Corinth in Greece. He was 57. 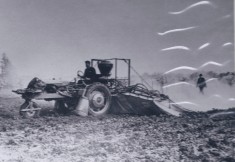 He was recognised as a world-renowned agricultural scientist and skilled entomologist and his main work was devoted to the better and more fruitful production of crops whilst always bearing in mind the importance of natural control. For instance his first success was in the control of strawberry aphids by means or an ingenuous system of nicotine fumigation.