You are here: Home>People>The Lawrance Family

In 1864 Elijah married Elizabeth Willers (1843-1902), daughter of G W Willers of Harston. They moved to Trumpington. His forge was on the High Street near where Bidwells offices stand today. In 1865 Nathan married Lydia Willmott (1844-1881), daughter of a Haslingfield carrier before moving to Cherry Hinton & Burwell. Nathan’s sons Frederick, Nathan and Elijah were all blacksmiths in Burwell.

James remained in Harston for the rest of his life and his story is on this website. 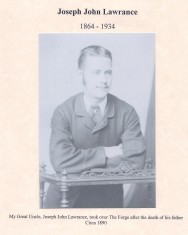 James had four sons and six daughters who were all born in Harston. It is assumed they went to school in Harston although the school log book for 1 June 1877 records that ‘Mary Ann, Sarah & William have been removed to Haslingfield school. The Head called on Mr Lawrance to ask the reason for the children’s removal. The following reasons were given:
a) Present schoolroom was unhealthy
b) Needlework unsatisfactory to parents
c) Children improperly treated
d) Other reasons declined for the present’.

Joseph John lived with his parents in the original Lawrance house (128 High St) which he continued to occupy after his parents moved to Forge Cottage (4 High St). He married Elizabeth L Page (1862-1954) of Ashwell in 1886 and they moved into Forge Cottage in 1903. They moved later to Ditton Lodge (7 Royston Rd)(link). They had 5 sons – Thomas Victor, Harry, Oswald James, Frank and Arthur Robert. 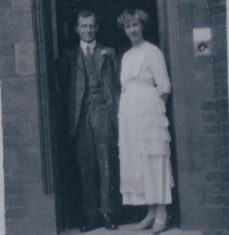 William Browning Lawrance lived with his parents until 1903 when he married Louisa Norman (1868-1921) in Harston and moved to 11 Hurrell’s Row. They had one daughter. After Louisa’s death William re-married in 1924 to Sophie Maria Patten (1877-).

Ann Elizabeth (1857-1949), the eldest of the daughters, was the first to leave Harston and lived with various relatives in southern England for many years. She returned to Harston in her later years and is buried beside her parents in the churchyard.

Jane (1861-1935) started teaching at the Haslingfield school in 1876. She moved to a school in Spalding where she became Headmistress. Jane never married and died in Spalding after being knocked down by a car in 1935.

Mary Ann (1863-1930) also started teaching at Haslingfield at the beginning of 1880 but within a month the school log book reports that she was ‘required at home. Her indenture has been returned to the Manager to be transmitted to the Council Office.’ She later left Harston to join her sister in Spalding

Sarah Susan (1866-1948) was the third Lawrance sister to teach at Haslingfield from 1880. She does not seem to have been a great success as the log book records ‘Heard S.S. Lawrence give a lesson. It was a most miserable failure. She had not the least idea of how to give a lesson, never having given an object lesson before’ and ‘Have still great complaints to make with regard to the teaching powers of S.S. Lawrance. She cannot manage the children.‘ However, in 1885, she was appointed Assistant Headmistress at the Spalding school where her sister was Head. She later became Head of a school in Kingston-Upon-Hull.

Mabel Elizabeth (1884-1959) was the fourth teaching sister and by 1911 had left Harston to teach at her sister’s school in Spalding.

The eldest two of the next generation – Thomas Victor and Harry – continued the family business in Harston until their deaths. For Harry’s story see separate entry on this website.

Thomas Victor (Vic) (1887-1956) lived with his parents until he married Blanche Eva Cutter (1886-1976) of Great Abingdon in 1925. They lived in the house originally occupied by the village policeman, but now replaced by 103 High Street. They had two children who both went into education. Albert Edward became Warden of Soham Village College 1972-84 and Mary taught first at Haslingfield School, then at Harston school.

Frank (1897-1969) joined the Royal Navy in 1915. After shore duty with the medical service, he went to Russia on HMS Dragon at the time of the Revolution and later to Canada on escort duty when the Prince of Wales visited. He was also at the Battle of Jutland. After the war, he moved south and ultimately became owner of the Slough Observer which remained in the Lawrance family, run by his widow and son, until it was sold in 1997.

Arthur Robert (1899-1960) was born at 128 High Street. He worked at Pask’s shop on Royston Road. He enlisted in December 1917 and fought in France where he was wounded and returned to Cottesmore House in Haverfordwest to convalesce. After the war he worked for Star Tea in Cambridge and then Stamford where he lived until his death.

Oswald James (1907-88) started teaching at Harston school in 1925. The school log book records that ‘he left on 28 Sept 1928 to proceed as a student to Southampton College. He was presented by the managers, staff and scholars with a leather suitcase.’ He was also secretary of the Harston Horticultural Society and received two inscribed books in recognition of his services. 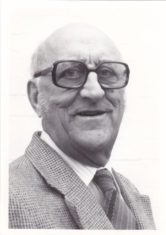 Ronald Harry (1921-2011), Harry’s youngest son, was a survivor. He fought in WW2 and was captured at the fall of Singapore. He was a POW at three Japanese labour camps including the notorious Kinkaseki copper mine, an experience about which he rarely spoke. In his 20s he underwent pioneering brain tumour surgery from which only 50% of patients survived. When he returned to Harston he became secretary of the Horticultural Society and a keen member of the indoor bowls club. When Ditton Lodge, 7 Royston Road, was converted into two flats, he and his wife Gwen occupied the ground floor and Harry, now a widower, lived upstairs. He bequeathed £40,000 to the Village Hall fund – The Ron Lawrance Legacy.

Pamela (1935-2003), Harry’s daughter was born in Harston, went to Harston school and was married in Harston. She later moved out of the village.

Vic’s son and daughter continued the Lawrance teaching tradition. His son Albert Edward (1928-1989) went to Harston school and, after university, lived in Harston until the 1960s with his wife June and daughter Gaye. His final teaching post was as Warden of Soham village College.

Vic’s daughter Mary (b1930) went to Harston school and later taught at the school for many years, finally retiring in 1989. She married the vicar of Harston, Leonard Askham. She no longer lives in the village.

There are no longer any Lawrances living in Harston but examples of wrought iron work made at the Forge can still be seen and the name lives on in the road name ‘Lawrance Lea.’