You are here: Home>People>The Hurrell family

The first Hurrells appear in Harston in the parish records in 1632 and several gravestones by the parish church record C18th burials. Four generations of Allen Hurrell’s lived at Harston House, named as New house, and was probably built as the Hurrell’s residence north of the western green about 1700. The Hurrells had a substantial private estate, partly inherited in 1693, and enlarged by 1800 to cover 197 acres. This, plus the Rectory estate they leased from Jesus College, made them substantial landowners in Harston.
.
After the death in 1777 of Margaret, the last Allen Hurrell’s widow, the Hurrell family name had died out in Harston and Margaret’s granddaughter sold off and broke up the Harston House estate in 1892. However, another branch of the Hurrell family still lived in Newton, as shown in the Family Tree below. 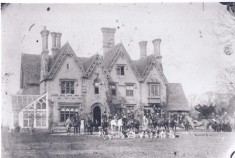 From the 1830s William Hurrell of Newton (d. 1854) and his son Henry accumulated a substantial estate in the east part of Harston for Henry. Their purchases included in the 1830s the Wallis’s 119 acres, in 1869 the reversion, effective from 1902, of the Whitechurches’ Baggot Hall land (145 acres) and by 1900 the Shadworth’s 72 acres. On the Wallis land in 1854 The Park (Park House) standing back from the Cambridge Road, was built by architect George Edmund Street (who also built the Law Courts in London and many other ecclesiastical buildings in Victorian Gothic style). The land opposite, next to the Drift trackway was used as a cricket pitch in the C20th. Newspaper articles show Henry Hurrell selling, 1869 & 89, several lots of poles cut from woods or poplar trees by Harston Driftway or from plantation Close. 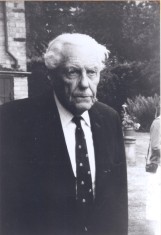 When Henry, latterly of Madingley Hall, died in 1906, his Harston estate went to his son Arthur, permanently chairman of Harston Parish Council 1897-1929 (d.1940). Arthur’s son, Col. Geoffrey Taylor Hurrell, Lord Lieutenant of Cambridgeshire 1965-75, still owned about 300 acres at Harston in 1980. His son Brigadier William James Hurrell eventually sold Park House after 2000 and all the stable and outbuildings were converted to residences. Some land is still owned by the Hurrells but none live here any longer