You are here: Home>People>Thompson family 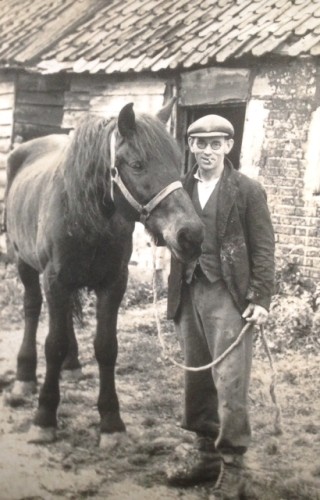 The first Charles Thompson 1816-1899 was born in Melbourn and worked as cooper in Cambridge 1841, but a brewer and cooper from 1853. By 1851 he ran a small farm of 8 acres next to the Baptist minister/manse in Harston High St. In her 1937 book on Harston Helen Greene said that nearly every innkeeper and farmer was a brewer but a man called Thompson was considered the best brewer in the village and used to go from one inn to another brewing ale. He was also an excellent cooper and made nearly all the casks in the district.

His son Charles Thompson 1847-1910 was the carrier from 1879, presumably horse and cart to Cambridge and he must have taken over this job from his mother-in-law Francis (Fanny) Cornell who was the previous carrier for the village. He also leased land in 1873 from the Longs to farm – this was the Station Rd land and the farm was known as Trigg farm.

His son Charles Thomas Thompson 1875-1948 was a farmer at Trigg Farm, a carrier but also a coal merchant (possibly where no 6 is now) and a number of people can remember the latter – all carried out on the Station Rd land. An extended family lived on the farm and in a nearby bungalow – 11 Thompsons were recorded there in 1911.

C. T. Thompson’s son was Charles William Thompson 1903-1959. He was a farmer and coal merchant. Directories also show that Charles was a motor car hirer in 1937 but we cannot find any evidence of where this was. Jane Pevely remembers the present (2015) driveway to 2 Station Rd was previously wider than it is now. Some way down it, on the right, were some railway carriages; Charles’ family – Margaret, Sylvia, and Ron Thompson were born there. Charles’ brother Norman Pennell Thompson started a bus company in Harston.

Jenny Todd, a granddaughter of Charles tells that George, Charley’s brother built a wooden bungalow to live in when he got married to Queenie. A bungalow with a difference, though, because he put wheels underneath the bungalow so he wouldn’t have to pay council rates. George also kept pigs up in the fields behind the house. George Howard Thompson was a poultry farmer and when Trigg farm and bungalow was sold around 1965 (by Ronald Herbert Charles Thompson – Charles’ son) he moved to the bungalow at 53 Station Road on the corner of Lawrance Lea and continued to sell eggs from there. Bridget Bromilow remembers when she first came to live in Harston “He had a small-holding and used to keep chickens from which he sold lovely fresh eggs. I understood that the orchard on which Lawrance Lea was built had belonged to Mr Thompson. Later he sold up and went to live near some relatives”. Charles’ sister Doris married Thomas Butler and they used to have a poultry farm at the top of Newton Hill before they moved into the Bungalow in Station Rd, Harston.