You are here: Home>People>Jill Thorne 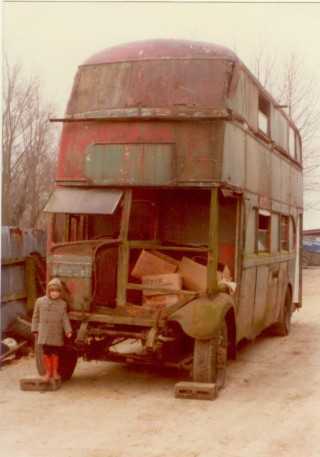 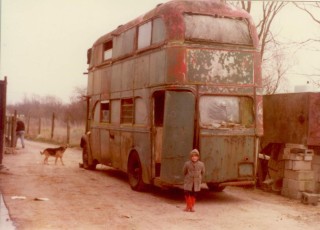 Nigel Schoepp, and Stuart Segrave who owned Willow Farm where Jill moved to said that  Jill originally lived in a single decker bus in a field near Haslingfield Manor, but was told to leave. She met Stuart’s father, who allowed her to move this bus to Willow Farm.

Some time later it changed to a double decker. Even later still, she left the double decker bus where it was and went to Girton but returned to the bus because ” ….. I missed it here…. “

Later again, she left the  bus and went to live on a boat on the river.

Stuart says the bus was eventually removed “ …… possibly to a bus museum near Lowestoft …”.

Two families who knew her give their memories below.

We first met Jill (or ‘Josh’, to use her preferred nickname) soon after we moved into Harston (in Haslingfield Road) in September 1968, but she had already been a resident in Button End for some years previous to this. At this time, she had an unusual, indeed a bizarre residence and lifestyle, living in a ‘minimally-converted’ double-decker bus, which was ‘parked’, adjacent to woodland on land ( Willow Farm, on the left-hand side of Button End), that is now still owned by the Segrave family (Stewart Segrave of Haslingfield Road, and the late John Segrave, formerly of 2, Haslingfield Road, Harston).

Jill’s principal ‘claim to fame’ in the Harston community arose from her acclaimed and single-minded efforts in ‘rescuing’ and looking after the many stray and semi-feral cats which abounded here, in the 1960s and 70s. Many of these (we can’t remember how many, but we are sure it was more than a dozen) lived in or near her bus-residence; others, for instance, lived in central Cambridge, where she visited and fed them regularly, for example, in the churchyard of St Andrew’s the Great. Her bus-residence had only minimal and out-dated ‘mod-cons’; a couple of paraffin stoves for space-heating, and a paraffin heater for food-heating; plus cold water from a standpipe – and it was very minimally-maintained (I recall providing some rough planks of wood, to cover over various large rust-holes in the floors, and especially on the rickety stairway to the upper deck!)

Despite her highly ‘unconventional’ lifestyle, Jill was very well-educated and also very knowledgeable. When we first met her, she was working as a secretary at the Cambridge University Board of Graduate Studies (‘BOGs’), in Cambridge. Her parental family had previously lived in India, probably for the whole of her childhood (we think that her father officiated on the railways, probably until Indian independence in the late 1940s). Although she herself never married nor had children, her niece is the actress, Angela Thorne, who became especially well known for her role in the TV sit-com, ‘To the Manor Born’, where she acted the part of the friend of Penelope Keith’s ‘lady of the manor’. Jill was an accomplished poet, and she had many of her poems published in the Cambridge Evening News in the 1960s and 70s.

A poem of Jill’s, written around 1980 or possibly earlier, as published in The Cambridge Evening News:

From other time and other place
Your instantly familiar face
Is here. Our minds take sudden leap
Into that hidden deep –
We say: “How odd – I seem to know you well….”
And speaking, break the spell.’

Eventually (we think around the 1980s), Jill became too frail to continue living in her dilapidated bus, and was compelled to move into sheltered accommodation in Chesterton (which she said she disliked heartily, when we visited her there!); then she spent her final months before she died in a nursing home in Bottisham, where she seemed a bit happier. (There was hope that her disintegrating bus was bought by a lover of historical artefacts but we understand it was scrapped, sadly, by the Ipswich bus museum.)

Jill will always be remembered with great affection, by her many friends and acquaintances; she had an amazing affinity with her ‘rescued’ cats, and she provided an important community- and animal-oriented charity-service on their behalf. She was typically outspoken on many ‘quasi-political’ issues, but was always friendly and sympathetic. Perhaps our well-regulated and safety-conscious lifestyles today, have made her particular brand of eccentricity to be no longer possible!