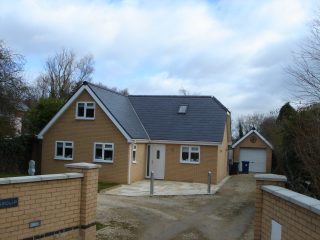 Planning permission for the original  bungalow was given in 1948 to Mr D W Evernden. The permission was only granted in 5 year periods after which time the site was to revert to its original state. In 1968 permission was granted for the structure to be regarded as permanent. In 2008 the structure was demolished and replaced by the current chalet bungalow which had a one and a half storey extension built to the side in 2010.