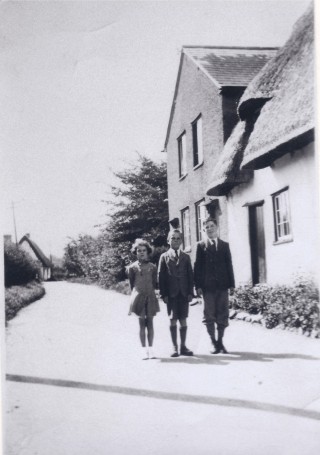 Date unknown. Greystones, one storey with a thatched roof. (Two storey Avalon to its left)
(Deacon) 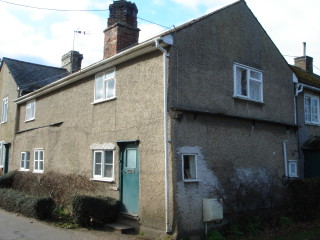 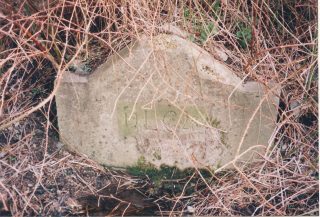 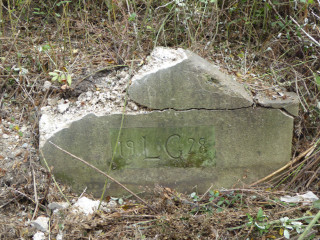 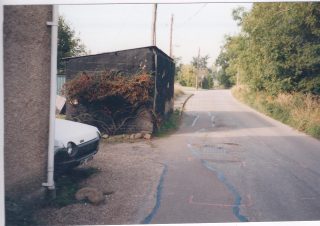 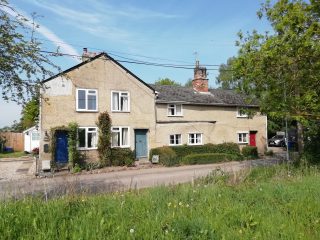 Rose Lea, Avalon to the left and Greystones to right, seen from across field May 2020
(Roadley)

Part of a row of tied cottages

Greystones is now (2020) a two storey building with a slate roof but was originally built as a single storey building with a thatched roof. The first photo shows the thatched roof and the second one shows the beam marking the level of the roof. It also shows the front door in a completely different position. This is because at some point in time, Greystones was two dwellings. The sales document from 1932 states that there were five attached properties- four in a row parallel to the road with one at right-angles to it at the end. The front row now has three cottages. The sale was part of the Hays estate sale but it appears that the buildings remained in the Hays ownership and continued to house their farm workers.

We have no dates for the building of the attached properties Rose Lea, Avalon and Rose Cottage which was the last addition, nor when Greystones had its second floor or changed from two cottages to one.

The building to the north of Greystones is believed to have been a coal store. From 1928 water was supplied from a point opposite the cottages, sadly damaged by ditch-clearing operations on the adjacent farmland.

Win & Norman Manning lived in the tied Greystones cottage from 1958 as they worked at Hays farm. When the roof needed repairing in 1970 Norman asked for it to be tiled instead of thatched to reduce any risk of fire.

Originally part of a farm set on fire

The date of the building of Greystones is uncertain but it is believed that it was the farmhouse of the Hays family before 1785 with a barn and other buildings around it. A fire destroyed everything except the house and barn as written in the news report below:

Friday last, about noon, a fire broke out at the farm of Mr Hayes of Harston, in this county, which consumed the barns and out-houses, and destroyed his whole stock of grain, etc. It is thought to have been maliciously set on fire.

The Hays family later (around 1800) moved from Button End to The Old House on the High Street and moved the barn there in 1848. The barn had the date put on it.