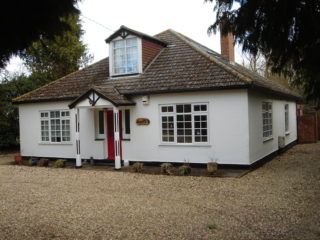 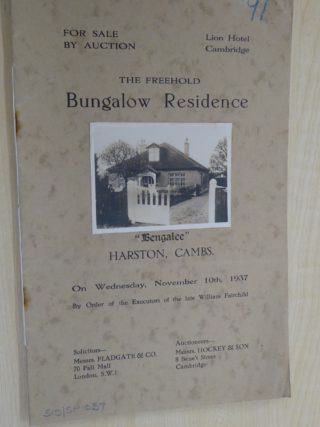 The land was originally allotments owned by the Church as Glebe land. Under the Glebe Lands Act of 1888, with Board of Agriculture permission, in May 1919 some 8 acres were sold by the Vicar to Harry William Jude, a farmer, for £300. Described as freehold heredits and premises there was no indication of any property on the land.

On 16th July 1923 he sold a piece of the land for £70 to William Fairchild who was probably a Doctor. The land had a frontage of 66 feet and a depth of 660 feet and was described as an acre and named Bengalee. It is likely that no property stood on the land at that time but one was erected soon after.

William Fairchild died on 18th February 1937. In his will he left the property to his son Dr George Cranston Fairchild who via probate took ownership on 11th June 1937. It was offered for auction by Hockey & Son on 10 November 1937 and purchased on 18th January 1938 for £875 by Capt Archibald Claude Taylor who was the managing director of Cambridge Newspapers. The dimensions changed to a frontage of 59′ 6” and rear of 66′ and depth of 660′. The entire auction catalogue entry can be seen by clicking on the PDF link below.

On 30th December 1958 the property was sold for £1900 to Leslie Thomas Clarke, a Local Government Officer who formerly lived at Rose Bungalow, Button End.  The dimensions reverted back to 66′ x 660′. Still known as Bengalee, at some stage he re named it Fieldside.

On 16th January 1961 the property was sold for £3900 to Stanley Baker, a Libary Assistant. He died on 2nd August 1963 leaving the property in his will to his wife Hilda May Baker.

She died on 24th July 1973 and left the property to her sons David Henry John Baker and Peter Stanley Baker who had probate granted on 13th November 1973.

On 19th August 1975 they sold the property for £19,600 to Kenneth Patrick Hunwicks and Rosemary Alexandra Hunwicks.

On 20th April 1994 they sold the property for £165,000 to Stephen and Marian Mynott who renamed it Honeybet after their Kennel Club affix.