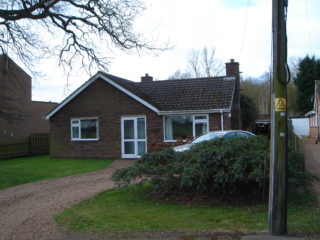 Joan and Mike Rivers bought the land in Button End just beyond Fleece Cottage, around 1960, to build their bungalow, Oakhaven. When Mike built their house he noticed the old driveway for coach and horses that went down his present driveway from his front garden round the back of Fleece Inn (Cottages) where people would get off to go to dances at the Inn, then swing round back onto the road by Violet Cottage.

Mike used some of Wisbey’s cement lintels from the nearby gravel workings to build their bungalow. In the 1960s Wisbey’s gravel workings behind Oakhaven and the other bungalows left boggy areas and ponds where they could see moorhens and other wildlife. Most gradually got filled in – Mike filled in some areas when he dug out his house foundations.