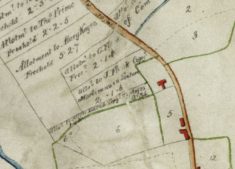 At Inclosure in 1799 most of the 20 acre plot Linden Lea was later sited on was owned by Allen & Mary Hays, and George & John Flack. The Hays family held the land until the 1930s, gaining the freehold  in 1933 from the Lord of Manor of Mortimers in Foxton, John Nelson Bendyshe. Due to defaults on payments by the Hays, the bank sold the land in 1930s. 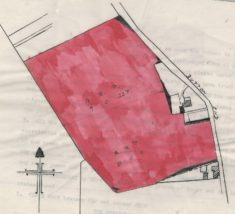 In May 1933 two fields making up approx 20 acres of land was sold by the bank to Alice Jane Wisbey & Francis Stanley Wisbey of Haslingfield, who were partners in builders W. Wisbey & Sons Ltd. The latter business (whose registered office was the Maltings, Haslingfield) bought it in October 1933 for £1230. On 8 April 1933  there was an undertaking by the Lord of Manor of Tiptofts (WT Rowley) not to make any claim against the Wisbeys in respect of 1 acre, 0 rods & 23 poles of land forming part of 19 acres 0 rods & 22 poles formerly copyhold but believed to have been enfranchised (eg now freehold) some years ago yet records could not be found.We think this refers to adjacent land bought along the northern boundary of the 20 acres.

The Wisbeys used much of the southern part of the land to extract gravel. The abandoned pit areas now form a wild natural area behind the Button End Industrial estate. 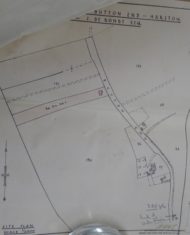 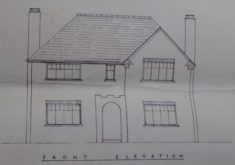 The adjacent land along the northern boundary of the 20 acres was bought by John De Bont in the 1930s and is shown on the Dec 1939 planning application map. John De Bont wished to build a house there- see sketch- but this was never built but a prefab was later erected on the site and rented out by Mr De Bont who was a dentist living in Cambridge.

The prefab was a  type of Nissan hut with pointed roof and was made of 2” thick slabs of plaster, one on inside and one on outside, with felt on the outside to protect it from the weather. It was cold and during the winter, especially the worst winter of 1962/3 the occupant had to light fires to thaw the taps. it was this prefab that was later knocked down when the new bungalow named Linden Lea was built. 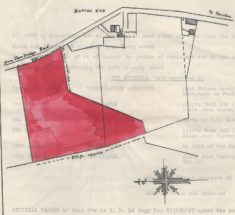 On 16 Nov 1944 W Wisbey & Sons Ltd sold part of the Plot forming a large field containing 19 acres 0 rods & 22 poles, to John De Bondt of 23 St Barnabas Rd, Cambridge, Dentist for £655. The purchaser was to maintain in good condition the boundary fences on south & South east sides of property. The plot had a frontage to Button End road of 330ft and was roughly 7-8 acres as shown by the red shaded area on the map. This left the Wisbeys with the remaining 11 or so acres where they had their gravel pits.

On 22 December 1947  J De Bondt then sold the land to Albert William Porter of High St, Haddenham, Market gardener, for £1600. The Plot was of 7 acres  and still had a frontage to Button End road of 330 ft together with poultry houses and buildings erected. By August 1948 a bungalow and premises were in the course of erection.

On the 20 May 1954 AW Porter sold 5 acres (of 7acre plot) to Allen Henry Seagrave. This was the start of Willow Farm (see location on Land Registry map below). The remaining 2 acres remained with AW Porter. 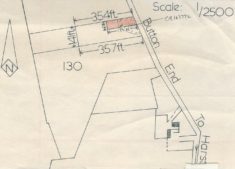 On 2 April 1958 an agreement between AH Porter, Harry Copley (lender) and AH Seagrave resulted in AW Porter taking full possession of the remaining part of 7 acres gaining a plot of  354/7ft in depth and 141ft in width, fronting Button End road, as shown on the map. This held the garden and bungalow in one corner shown in red on map and land later to become Centenary Works.

In April 1962 Albert Porter, retired smallholder of 42 High St, Harston sold all this land to Frederick George Willers, builder & undertaker of Riverview, Harston for £1300. FG Willers signed the papers for his son Brian as he was under 21 and Brian moved into the prefab. 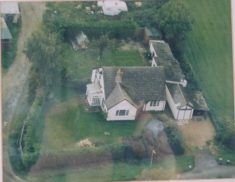 In June 1964 F G Willers got permission to demolish the existing dwelling and erect a new bungalow. This was actually built by Brian for himself and family to live in. Linden Lea was built half on the original prefab site and part of the latter was knocked down first. Behind Linden Lea was a pasture field (now Centenary Works) that Brian kept a pony on for his children to ride. Some workshops were built by 1970 but all were moved there by 1970 when FGWillers moved from Riverview which was sold and Centenary Works was established. 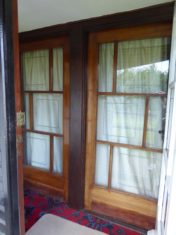 Internal doors reputed to be from Iranian embassy

After Brian had moved out of Linden Lea his dad FG Willers moved in and made a few changes. When Brian built Linden Lea he put in ordinary Saplia doors from Ridgeons but his dad put in some wider doors, bought from Doug Presland at Orwell. Doug had recycled wood products including these doors which are reputed to have come from the Iranian Embassy. FG Willers also added the south facing conservatory (see aerial photo) which has recently been removed and replaced by a larger sun room. FG Willers wanted more land to the side so that led to the exchange of land – see maps.

The line of sheds/workshops along the northern side were there with the original prefab and remained. Charlie Simpkins had his lawnmower workshop there behind the garage for about 10 years- originally he thought he would be there 6 months. His lawnmower business then moved to Haslingfield and is now run by Bakers. To the north of the shed the narrow piece of land housed a shed with a toilet in it (used by Charlie) – over an old well, which was then used as a cesspit! Behind the workshop was an old coalshed and behind that a greenhouse.

The exchange of land in 1993 involved reducing the depth of the plot shown in pink and giving the green area in compensation, creating a plot as shown on the Land Registry map. The land exchanged and behind the plot that was once pasture had now become Centenary Works.

The plot that held Linden Lea remained within the Willers family until it was sold in October 1993 by Peter Allen Willers to Colin William Hollis & Barbara Christine Felby-Hollis. They got permission to erect a cattery but never proceeded with it. 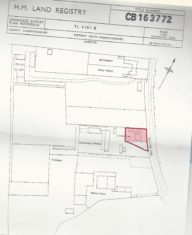 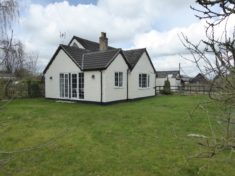 The owner has since replaced the conservatory with a larger sun room on the south side.