You are here: Home>Places>Button End>No 4 and 6 Button End (formerly Nos 5 and 6 Hill View Cottages) and their occupants

Hilary Roadley (with information largely from deeds of No 6).

After death of Joseph Ellis, his will of 31 Jul 1857 stated his son Joseph Ingle Ellis, Octavius Wedd and Joseph (Ellis) Pearce would gain 4-6 Hill View Cottages. They immediately sold it to Allen Watson, a grocer from Cambridge and Joseph Deacon Fetch, gentleman. On 15 Feb 1864 they sold to Stephen Chapman, farming bailiff of Harston, (4-6 Hill View Cottages) a messuage or tenement and outbuilding, yard and garden, together with ways, watercourses & appurtenances, which was fenced off from the adjoining land of Allen Watson. It was bounded on the west by premises of Allen Watson, on East and South by land of Edward Greene de Freville and on the North by the public highway. It was in the occupation of Willian How. 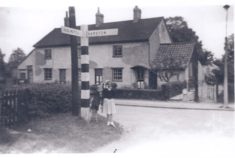 1871 census: Stephen was a farm bailiff. He lived in Church End with wife Sarah, daughter Naomi and son Obediah.

By 1891 his wife had died and Naomi was the housekeeper and Jediah was a carpenter. Stephen age 83 was living on his own means. Stephen was recorded as a hurdle maker in Kelly’s directory from 1875 -1892. 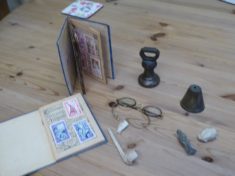 In his will his wife Sarah could live in the property in widowhood until children got to age of 21 when estate would be divided equally between all his children, except William Chapman who had already had his share. John Chapman, deceased before 1898 and late of Harston was mentioned. Stephen’s children were Obediah Chapman (of Norfolk), Naomi Prede Northrop (1866-1939, wife of Laurie Alexander Northrop, 1864-1943, of Harston, labourer; married 1893), and Jediah Jesse Chapman of Cheshunt, Hertford, carpenter. Thomas Hays was their representative eg trustee, until this time. In 1901 census Naomi and Laurie Northrop lived in Church St (could be at No 4 Hill View Cottages). Laurie was a horsekeeper on a farm and the present occupants of 6 Button End say they have dug up many horseshoes in the garden. In 1911 they lived in Hill View Cottages (No 4?) and had no children. Other artefacts found in house and garden reflect past uses and occupants- pipe, weight, old Sunday school books. 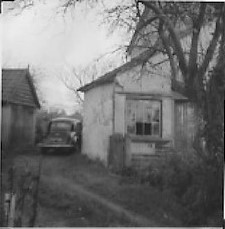 Bertie Northrop, a jobbing builder of Fleece Cottage, Button End, sold to Albert Charles William Edgell premises numbered 5 & 6 Hill View Cottages, Church St which were bounded on north-east  and South-East by property now or formerly of Christopher John Ives and on south West by property now or formerly of Naomi Prede Northrop. Rights retained in respect of user of the Pump on S-w side of property in common with adjoining owners & occupiers. Also possible that Bertie’s son Victor (1904-63) and wife Louise (nee Cross 1902-86) lived in No 6 Button End as villagers remember Lou having the sweet shop there. Maybe they rented from Edgell. 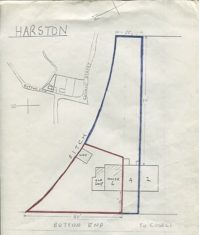 I was born in 1939. My first memory is living at No 3 Hill View Cottage at the top of Button End, Harston. I moved there when I was 11 months. I know we never owned any property but always rented.When we left in 1944 the Narrocotes lived in No. 3. They had a son Andrew. Our neighbours were Mr. and Mrs. Creek who lived in No1 Hill View. Mr Creek used to sweep the paths and edges of roads. Another neighbour Mr. Hedgell, was a widower who lived at No 4 and he kept corgi dogs and sold the puppies. I loved going to play with them. Often he had nine or ten puppies in a wire run in his garden. I can remember the mother of all the dogs was called Beauty and one of her daughters which he kept was Dainty. Next door to Mr. Hedgell at No 5 lived the Stittle family. Joan, the daughter, was my age and we were playmates. In No 2  Hill View Cottages (now with Church Street address) lived the Wisbey family, Frank and Ruby being their children. In No. 6 was Lou Northrop who ran a small sweet shop.

Tenancy agreement between ACW Edgell and William Clifford Roberts (husband of Betty), welsh, & a civil servant, for  No 4 Hill View Cottage (late No 2 Button End).  The weekly rent was £1.10s. The tenant had the responsibility to keep the place tidy, clean glass and toilet outside and keep garden  and path tidy and free from weeds.

14 Dec 1965: Edgells sold No 2 Button end to John & Violet Wratten. The 1965 conveyances mentioned that 2 & 4 Button End, still called Hill view Cottages, shares a septic tank that was situated at 4 Button End, with No 2 being allowed access. They had to share the costs and responsibilities to empty and maintain the tank.

These dwellings were considered uninhabitable and the new owners lived in a caravan elsewhere while they renovated the property. To begin with the property had an outside toilet with the waste put in holes dug in the garden. The small addition to the side had previously housed a shop run by Lou Northrop. Bertie’s son Victor (1904-63) married Louise Cross (1902-86), so she was possibly the Lou who ran the shop.

No 4 had sitting tenants, Mrs Betty Roberts who lived to be 102, and Betty’s husband (she always called him Cliff) was still alive; he died we think several years later. Betty’s mother lived in Hurrell’s Row. Her family were long lived and at times 5 generations could be seen visiting and enjoying the garden of No 4. Until Mrs Roberts moved out of No 4 Button End in 1983/4 she had the largest garden. After 1984 the owners of No 4 & 6 altered the garden boundaries to give them more garden in No 6, where they lived. 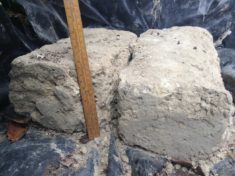 Renovation of the cottages

A survey done in 1968 suggested No 4 was in better condition than No 6. The external walls were of claybat, above a brick plinth. Two large blocks of claybat still remain outside- large blocks of light coloured clay which are very chalky. When you break them up they literally turn to powder, with bits of flint, straw and horse hair revealed in the clay. They were laid to form a 9 inch thick wall. The claybat walling was rendered externally and like much of the internal plaster of original clay and chopped straw, needed renewing or replacing. The roof was of span design covered with double lap clay tiles with some outstanding repairs already done. The windows have small wooden sliding sashes, still there today but in a much improved state. 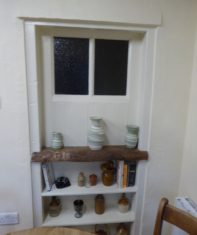 No 6 Button End, old original beam used to mask entrance to past outside coal house

The chimney stacks needed repointing and required some re-building. The chimney of No 6 was rebuilt with a new pot in 2002, when the loft conversion was done. No 4’s chimney has been repointed and both have been internally relined to take multi fuel stoves.The ground floor of No 6 was brick paving laid directly on the earth and was worn and damaged whereas No 4 had cement laid over the brick paving. There was no evidence of a damp proof course as expected of buildings of this age and both cottages had dampness in the ground floors and ground floor walls. Both cottages have since had silicone injection damp proofing.

Renovation of No 6 and No 4 involved removing woodworm from the timbers. One beam remains visible at the top of the stairs of No 6 that goes the width of the house and another old original beam was used to mask entrance to the old coalhouse. The original fireplaces in lounge and kitchen that back onto each other still remain, as does the pantry in the kitchen but the twist at the bottom of the staircase off the side of the kitchen was straightened out in 2015 when the kitchen was extended. Access to the roof space was created and later converted to a loft room in 2002. 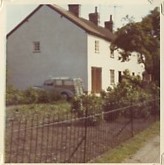 No 6 Button End mid-1970’s extension with garage under

In 1968 both cottages had mains electricity and the ordinal electric wiring was lead casing, mainly lights and a few small round pin sockets which have all been renewed. No 4 had a glazed corrugated roofed lean-to on 4’’ block concrete walls and outside toilet built with 4’’ block walls under weather proofed tiled roof. This drained to a cesspool. No 4 had a mains water supply over a white glazed sink. The old external toilet at the back of no 4 was replaced with a bathroom extension in mid-1970’s, at the same time making the back room into a kitchen.

In 1968 the timber framed lean-to with board and joist floors of No 6 were affected by woodworm and rot and it was pulling away from main building so needed demolishing. No 6 added an extension in the early 1970’s where this old lean-to shop was which gave an upstairs bedroom and bathroom with garage under. Originally No 6 just had an external water standpipe out back and was without drainage but a mains sewer in Button End became available to be connected to in the late 1960s. 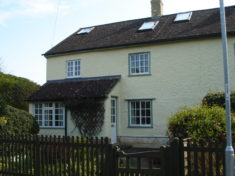 The garage was later converted into a dining room and extended out to add a lobby and corner window in early 1980’s. A new garage had been built in 1977 after the separate old building at the side was knocked down.