You are here: Home>Places>High Street>25 High Street, The Old House 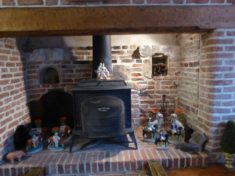 The house is thought to have been built in 1612. It was in an old close and the long plot may have originated as a long strip in a large village medieval open field. All that can be seen from the outside of the structure is the late Tudor Chimney in the middle of the house. An inglenook fireplace was also uncovered by the Heap family in 1970s. Major additions to the house were made in the early 1800s, 1930s and in 1969/70. Helen Greene’s 1937 book states ‘The Old House’ used to be known as ‘Poplar Farm’ because of an avenue of poplars leading to the front door. They were all blown down in a storm, date unknown. It’s character has been altered during restoration when pseudo half-timber was introduced.

William Hayes moved to ‘The Old House’ after most of his farm buildings burnt down in Button End in 1785. However, in 1802, plot 87 on the Inclosure map shows the house with its outbuildings was owned by the heirs of Henry Driver so William Hayes may have moved there after that date. Census records do show that William’s son Allen (D:1847) had moved to the Old House from Button End by 1841. It is thought by 1848 Allen’s son Tom removed the old surviving barn from Button End to The Old House garden as this date is carved in one of the old beams. 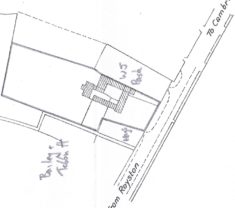 Allen Hay’s son Tom, then grandson Tom, with their families, continued to live there or own the premises until 1919. At that time the land was still copyhold of the Manor of Shadworth but by 1920 Tom Hays had bought the freehold. 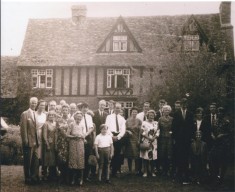 Bisseker family gathering at back of Old House 1932-3. Doris 3rd from left

The Dukes eventually sold to the Reverend Harry Bissseker in Jul 1934 but ownership was transferred to Mrs Marion Doris Bisseker in Feb 1943 as she had provided the purchase money. The Reverend Bisseker had retired from the headship of the Leys School in Cambridge but continued to write Christian books/sermons in his study which had walls lined with bookshelves. The Bissekers immediately (1934) added an extension (shown in plans) with a large chimney at the back of the house to create the study. They had the house exorcised as it was supposed to have a ghost that the late Mr Harry Lawrance, the village blacksmith, once told of: “a Norman without a head had been seen coming downstairs”. Others say a lady ghost was seen twice in 1913 by a nursery maid. Noises were often heard of a peculiar nature. Sometimes the owners could hear the front door being unbolted and someone walking upstairs. 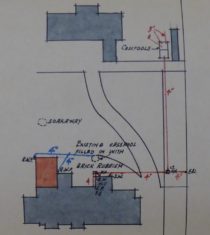 At other times three loud knocks would come at the back door but no-one was ever there. Again on calm, still, moonlight nights, would come the sound of rushing wind, and hail dashing against the window, followed by angry voices in the room above. The voices were so clear and loud one evening that all the family heard them and declared that this time they must be human. But on searching the rooms no-one was found.

Nora Sellen said (in 1970s) that while it was the home of Reverend and Mrs H Bisseker, it was the headquarters for every compassionate concern for the village. Mrs Bisseker remained there after the death of her husband until 1968. Her grandchildren have described the house in 1940s & 50s from their memories when visiting: There was a very large kitchen with stone bricks laid on the floor that would have been cold. There was a boiler on one side which powered the hot water. There was a large old fashioned cooker. At the corner of the kitchen there was a door with steps down into the larder where all perishables were kept. The other end of the kitchen was the scullery with a large sink and draining board. Downstairs there was a cloakroom with a basin and a toilet that had a long chain you had to pull on. The upstairs bathroom had the same type of toilet, a large bath and basin. There was a grandfather clock to the side of the staircase and a grandmother clock on the landing halfway up.

To the right hand side of the drive was a building that housed the car. Behind the house was a large barn (which had barn owls in it) which separated the house and garden from the large fruit orchard with mainly apple and pear trees with some plum trees. They stored the fruit picked from the orchard on paper in the loft attached to the house near the back door, and were able to eat them all year long, lasting until the following summer. Mrs Bisseker also used to grow her own vegetables. Fronting the garden there was a row of enormous horse chestnut trees.

From March 1968 it housed Dr John Heap, his wife Peggy, and their three children Sarah, Alice and Thomas. Although the Heaps bought the house for £8,500 then, there was a lot of work that was needed. The roof leaked, the electrics needed doing and heating putting in to make the house more comfortable. Over the first 3 years they made major alterations at the back by removing the fireplace and chimney on the west front of the 1934 extension and putting in a big new window to improve the dark study and left the study as a room lined with bookshelves, then they joined the 2 ends of the house with a flat roof extension giving room for a playroom and bathroom dressing room above. F W Willers of Button End did the work. Later they moved the original back door to the side so it no longer came straight into the kitchen. There were lots of different big cupboards and an odd bit of attic that allowed you to climb into the roof space. 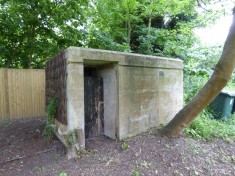 To the right of the drive were a lot of sheds/buildings, garage and the old barn behind. Behind the house to the right was a flat area that used to be an old grass tennis court. In the garden was an old air-raid shelter which they stored apples in at one time, but it became overgrown with ivy. To the right of the house were some good climbing trees for children to play on and in the front garden a large horse chestnut tree supplied conkers.

The barn was removed in 2003 when the Heap family built a new bungalow for themselves. In July 2003 The Old House was on the market for £575,000 and the James family moved in and lived there until recently – 2017.