You are here: Home>Places>High Street>45 High Street - The Hut 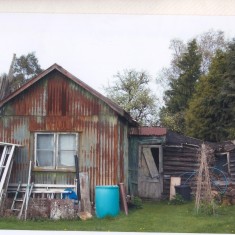 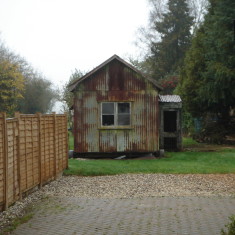 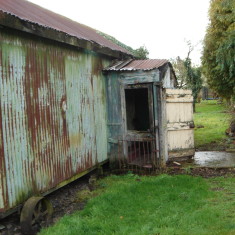 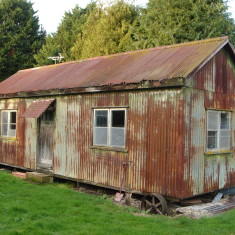 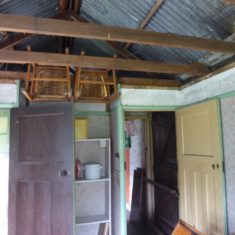 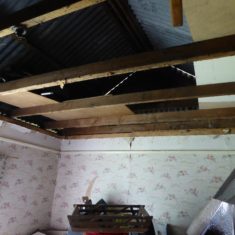 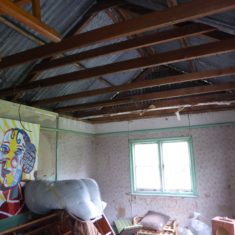 In 1934 Eliot Chapman (son of Claude who lived in No 43 High St) built The Green Hut in the back garden of No 43, ready for him and his bride to live in after they were married in 1934.  The family called it The Green Hut because of the green paint with which Eliot painted the Hut. Subsequently the Hut was given the postal address of 45 High Street and is registered at the Land Registry as 45, The High Street.

The Hut was built without wheels, but with a kitchen on a concrete slab, at right angles to the right. It was in fact a corrugated tin “shed” approximately 30 ft. x 10 ft. overall, with access from the driveway to No 43 High Street. After it was built, some of the villagers complained to the Council about its position. Eliot overcame these objections by putting the main part, the Hut, on wheels. It was never intended that the Hut be moved! It was also built on wheels because then it was not liable to either planning regulations or rates. The part of the building on ancient cast iron wheels consists of two rooms plus an entry hall. The part of the building that housed the kitchen and bathroom has since come down. This part of the structure appears not to have been on wheels and the hard standing where it once stood remains.  Light switches show it once had services connected to it. The hut has been moved temporarily to the end of the garden- April 2017, in readiness for a replacement home on its site, and is for sale.

Eliot Chapman had four children – Clive, Roger, Jane (dob 1942), and Jill (dob 1947). Clive, Roger and Jane were born in “The Green Hut”. After Eliot returned from WWII, he applied for a council house as there were now himself, wife and three children living in the Hut, although the children frequently slept in their grandparents’ (Claude Chapman) home at No 43. The family were allocated a council house and moved to 15 Church Street in 1947 where Jill was born. This allocation was conditional of Eliot renting out the Hut; Mrs Burnett (a local post lady) took the tenancy.

Mrs Johns then rented the hut before Mr & Mrs Clark, who lived there whilst No 7 Green Man Lane was built for them. Mr Clark was the grandson of Mr Swan, who owned Nos 43 & 45 High Street. It is thought that nobody has lived in No 45 since about the mid 1970’s. The property was listed as a separate rateable entry in the Chesterton Rural District Council on 1/4/1973, but was noted as uninhabitable at that point.

Contrary to some local rumours, this has never been a “shepherds hut”, although it is true that in previous years there were such huts which did look like No 43.