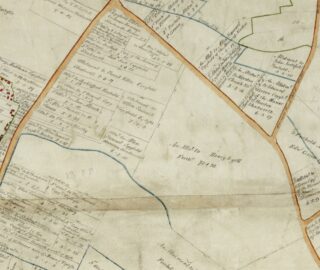 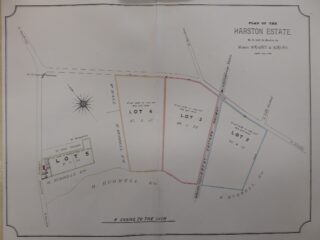 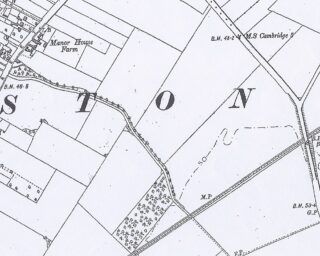 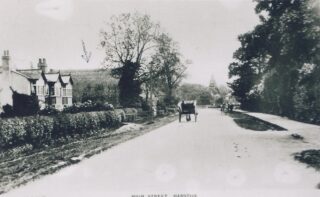 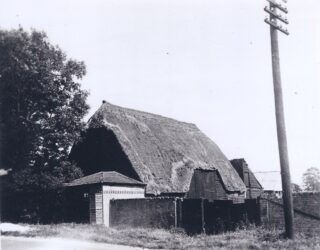 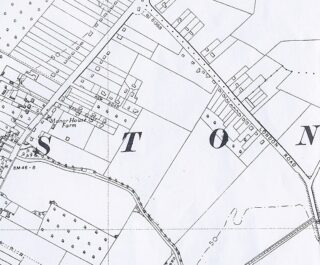 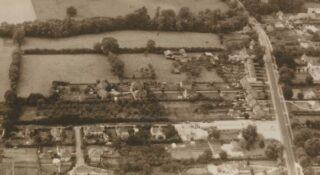 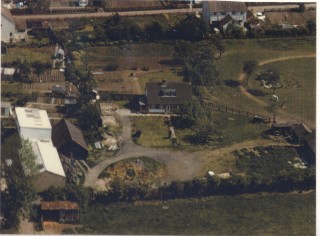 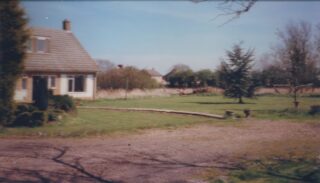 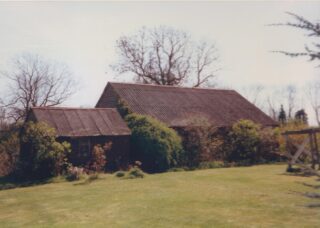 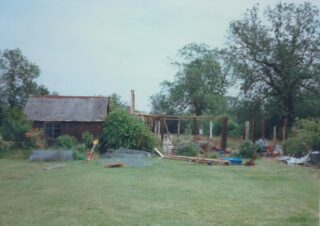 Until the land was inclosed in 1802 it was common grazing land for all of the village. Probably fairly early on after Inclosure a farm house was built on the High Street where No’s 104 & 106 houses were later built with access to the farm from the High St. The 1799 Inclosure map shows that the land Manor House Farm buildings were built on and the adjoining small fields belonged to Thomas Whitby and T/E? James and the 3 large fields fronting London Rd (shown in 1886 lots 2-4) belonged to Henry Lyell.

An 1886 sale document states for this Manor Farm that:

Lot 5: ‘The Homestead’ is situated at the entrance of the village from Cambridge, and consists of a FARMHOUSE with a pleasant aspect, built partly of brick and partly of stud and plaster, and covered with slates. It contains 3 Lower and 6 Upper rooms, with 2 Kitchens, Dairy and the usual Domestic Offices. There are also 2 Barns, Nag and Cart-horse Stables, Chaff House, Cow lodge and Piggeries, Open Shed , Granary & Fowl Houses, and other buildings all in good repair. And adjoining the house is a Good Garden and Productive Orchard.

Lots 2, 3 & 4: The remainder of the Farm which is Arable consists of 70A, 2R & 4P of first rate corn and sheep land in a good state of cultivation, lying in 3 fields fronting the road leading from Cambridge to Newton.

By the time the farm was sold in 1886 the land around the Manor house and Manor house were shown as Lot 5. Lots 2-4 may have been sold separately in the end. See estate sale map. At this stage the farm was just called Manor Farm- possibly because it had served Park House- but this had its own Home Farm.

The whole farm in 1886 was in the occupation of Mr Robert Pick, as a yearly tenant at a rental of £112 per annum, and was sold subject to his rights of tenancy.

Several newspaper reports state he lived and farmed there from at least 1881-1894.

Lightning caused a fire in a haystack, property of Robert Pick of Harston.

1901 O.S. map shows that the farm is now called Manor House Farm – the house being part of plot No 39; barns and farm buildings are still to the south of the house on the map and possibly still in use by the farm.

1910 land use evaluation map and associated information show for plot No 238/39 there was still a House & garden of area 2R 31P and this was occupied by C P Gaul with the owner James Bacon Rampling of Landsdown Rd, Cambridge. However, all the farmland and most of farm buildings to the south of the house belonged to Hurrells of Park House opposite, so by this stage the house and farmland had been separated.

Photos show the original farm house on the High Street with the barn behind. Another shows the old thatched barn. We know the house burnt down in WW2 by accident but does anyone know when the thatched barn was removed?

The 1946 OS map does not appear to show the barn. It does show that houses had gradually been built to the north along the High St and had taken some of the original farmland that fronted London Road.

The old Manor House farm land was farmed and possibly owned by Dennis & Liz Chapman as early as the mid-1920s although they lived in a bungalow in New Road which was built in 1923/4 when they moved to the village. The 1961 aerial photo shows his fields and farm buildings below ‘The Drift’ (bridleway) tree line, with Manor Close along its northern edge; the entrance was off the High St next to the Old Manse. You can also see the Chapman’s New Road bungalow behind the garage in the foreground.

His daughter Sonia remembers the farm well. They had fields of corn and sugar beet. They would put the sugar beet through a mangle to make feed for the animals. They had a chicken place in the middle of a field where they also had geese and one gander. She went to feed the chickens with corn and get water ready for her dad to feed the pigs. She would climb up the haystacks to find where the chickens had laid their eggs and would collect them.They had a cow initially which provided their own milk and her mum would keep some to make butter after they had taken the cream off. The 1961 photo shows the small pasture fields. We are not sure where Dennis grew the corn. Tony Gatward said Dennis Chapman and George Lacey farmed some land next to Old English Gentleman.

In 1963 permission was given (to be started no later than Nov 1964) for a detached house for Dennis’ older daughter, Mrs Dora Radford of Queen’s Close, to be built on part of the farmland but the occupants had to be connected to agricultural occupations or dependents of the owner of land.  This became No 96 High St accessed by an entrance between no 94 the Old Manse and the old telephone exchange.

This is shown on the 1971 O.S. map and the later aerial photo which shows Nos 11 & 12 Manor Close in the background and the white back garages/sheds of Nos 104 &106 High St to the bottom left (west). One of the original Manor House buildings next to the white buildings may still have been owned by Dennis Chapman at this stage.

In 1976 Dora Radford applied for but was refused permission to build two more dwellings on the farm land.

Various photos show the farm sheds around the bungalow were falling into disrepair and being dismantled by the 1990s.

In 1997 Dora Radford sold the bungalow and land and in exchange had a new house built to the right as you enter High Meadow which was developed on the land. Ten houses were built on the land 1998-9.