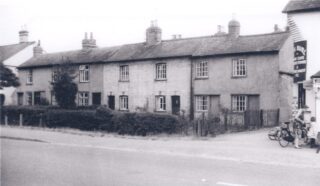 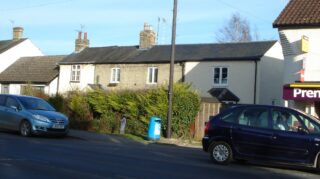 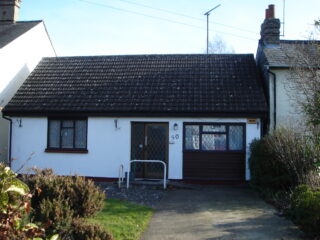 The site of the bungalow now found at No 50 High Street was originally occupied by two cottages that were part of the remaining terrace. They were demolished so the bungalow could be built.

Val Joslin recalls: When my family moved into their cottage (next to present No 50) in 1945 or 46 it was number 5, High Street and there were definitely 2 more cottages joined to it (Nos 6 & 7- now No 50). One was occupied by two sisters surnamed Mumford and the other by a Mr and Mrs South. I am not sure of the year the re-numbering took place nor exactly when those two cottages were demolished in order to build the bungalow (possibly 1960s). I was working in London at the time but I do remember that my parents were really worried about the effect this would have on their cottage wall and how it would be made weather proof. The purchase was made by a local estate agent who then built the bungalow for an elderly relative. The renumbering probably happened before it was built. Frank and Brenda Gates were the next owners.

Planning documents show that in Nov 1963 approval was given for the demolition of two cottages, Nos 50 & 52 High St to be replaced by one bungalow for Mrs M E Martyn, with provision on site for parking of one car. Further documents appear to be still asking for design details in Feb 1966 so presumably it was built after that.