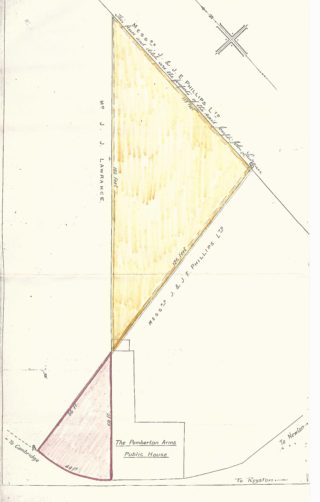 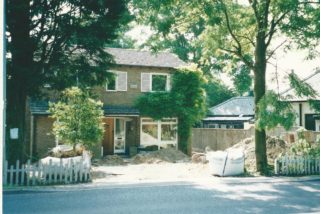 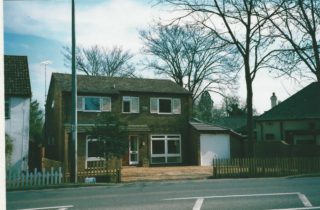 Whilst 2a High Street (formerly called Hewit House) is a 1970s built house, the land it stands upon has some history. It was part of a plot owned by William Long, one of the major landowners in Harston in the 19th century, which extended from what is now 8 High Street to The Pemberton Arms.

The whole plot, which included Forge Cottage (now 4 High Street) and the smithy, was purchased at auction by Joseph Lawrance, the village blacksmith, in 1893. At the same auction The Pemberton Arms, also owned by the Long family, was sold to another bidder. This left Lawrance with a triangular piece of land on the High Street right next to the Pemberton Arms building and the pub with a triangular piece of land behind Lawrance’s plot.

This arrangement allowed the Pemberton Arms to build the extension which still stands on the left of the building. It also gave Lawrance a much more usable rectangular plot to the righthand side of his cottage.

Joseph Lawrance died in 1934 and left all his estate to his wife Elizabeth during her lifetime and afterwards to his 4 sons in equal share. Elizabeth died in 1954 and on 7 Sept 1955 the ‘property was conveyed to Harry Lawrance of Ditton Cottage for £2200 consisting of dwelling house, blacksmiths shop with garden & outbuildings on High St with frontage on NW to High St of 175ft, a depth on NE side next to school of 193ft, a width to rear or SE side 138ft 9ins & a depth on SW side next to The Pemberton Arms of 193ft.’

Harry funded this purchase by borrowing £2000 from Geoffrey Taylor Hurrell, last repayment of £500 to Hurrell was made on 18 April 1964. On 23 June 1964 Harry made aDeed of Gift giving land containing 4 High St to his son Eric Oswald. The plot was 86ft on High St, 192ft by The Pemberton Arms & 60ft 6ins to rear. Eric covenanted with Harry to erect a fence along NE boundary.

This plot excluded the land containing the forge & associated buildings but include the cottage with its garden stretching to the boundary with the pub. Subsequently the garden plot was sold and what is now 2a High Street was built. A garage was added to the property in 2002.