You are here: Home>Places>High Street>49 High Street once The Green Man

49 High Street once The Green Man 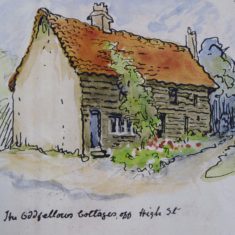 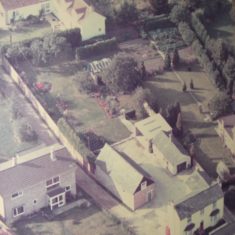 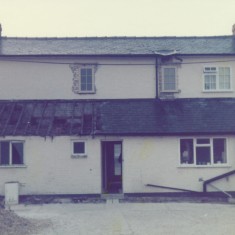 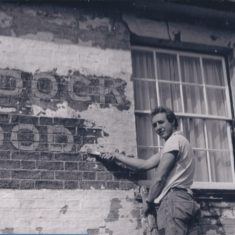 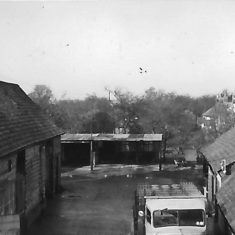 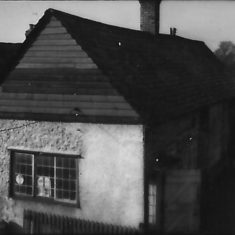 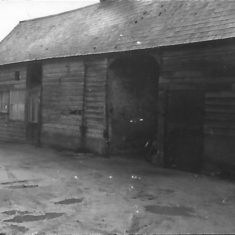 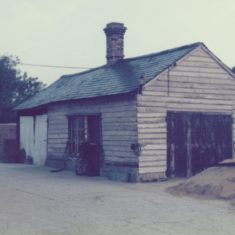 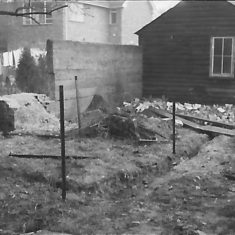 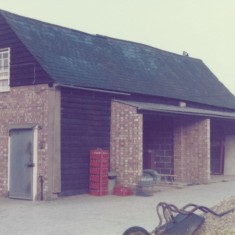 1960 left building behind No 49 that housed dairy
(Bowden) 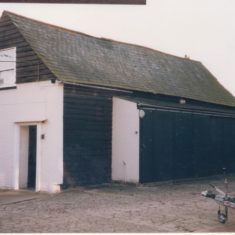 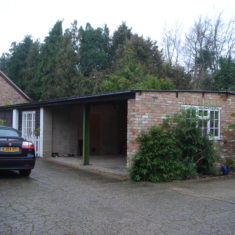 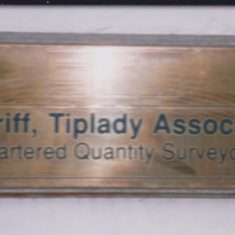 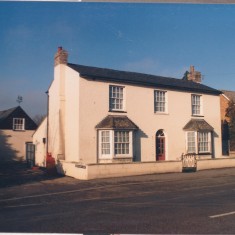 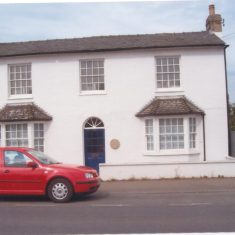 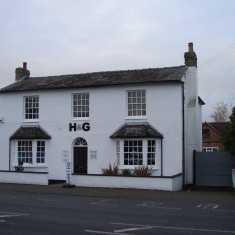 Before the present (2017) two storey “white” building was built at 49 High Street in 1838, there was a row of Tudor cottages further down the (Green Man) lane across the rear of the site, parallel to the High Street, the brick foundations found in 1960 during the removal of carports behind No 49. The 1903 O.S. map shows buildings which match this detail. The existence of these cottages was later confirmed by Peter Jackson of Church St, whose father (born 1908) lived in one of the cottages when he was a young boy. It is thought that the first public house was in the left hand end  of these cottages, which still existed in 1908 and were possibly there during WW2 when paper was stored there for recycling. This C16 pub  was originally called The Coach and Horses and then renamed The Green Man in the early C19 by the Northfield/Reynolds family who owned it. James Edwards was the registered licensee from at least 1777 to 1800. It’s decline as a main coaching Inn and change of name could be because of the 1802 enclosure of common ‘Green’ land in front of the pub which would have restricted coach access up the resulting narrow lane.

The Green Man at No 49 High Street

In 1838  a new Green Man pub was built at No 49, fronting onto the busy High Street, much more accessible than the old pub. It was brick built and consisted of a tap room, bar, parlour, 3 bedrooms and a small kitchen with stables and outbuildings to the rear.

However, in 1907 the licensing authorities considered that there were too many pubs in Harston and The Green Man’s licence was not renewed and it never reopened. The Cambridgeshire Independent Press on 15 Feb, 9 Mar & 8 Dec 1907 reported:

‘On grounds of ‘redundancy’ (ie too many pubs in a small area) magistrates have given the Deputy Chief Constable Webb instructions to object to the renewal of the licence of The Green Man, Harston. This was further considered on March 9 and the house was ‘referred’. The current tenant was Rebecca Gulliver, 66years, the annual licence cost £11 5s 3d and the rent (including 3 cottages) was £12 pa. Rateable value was £20 gross, £17 net. Trade amounted (per week) to half a barrel of draught beer, 12 bottles of beer and a gallon of spirits. .

It was used by the Oddfellows (290 members) once a fortnight, but attendance is poor.  There were 5 licensed houses within 615 paces including the Coach & Horses, White Swan & Pemberton Arms

£200 has been paid to the (Baldock) owners of the pub, and £25 to the tenant, Rebecca Gulliver, as compensation for the extinction of its licence.’

Site with mixed uses over the years

This site has had a very mixed use over the years. Sometime after the pub had closed, Mr Peachy moved his bakehouse from No 53/55 High Street to the Oddfellows House (possibly the Oddfellows cottages).  After the bakery closed, Miss Minnie Mumford had a grocery and sweet shop in the right hand side of the building at No 49. In the late 1940s she and her sister moved to No 50 High Street while Arthur Wisby and family moved from No 50 to No 49. Arthur Wisby’s daughter Monica Lucy then ran the sweet shop.

At some time there were built stables and a shed to the left and right of the site, perpendicular to the High Street.

To the rear, on the left is an outbuilding. It was originally built of clay batts, but these have largely been replaced by brick as the batts fell down! Mary Greene’s painting of Oddfellow’s Cottages (pre 1927) matches up with this building.  From 1956 it housed a dairy business, previously  run from Baggot Hall farm, which had been sold to Mr Rushbrooke.  He also bought No 49 to live there.  Mr Rushbrooke sold on the property and business to Mr Manning in 1959, who then sold it on to Andrew Bowden’s father, Frederick Bowden. In 1960 this outbuilding to the left housed a small cold store for the dairy in its front, with garages behind. . During Bowden’s ownership, the front part of the original cold store was knocked down by a reversing delivery lorry; it was re-built with the front wall moved further back, the cold store enlarged and an office built in the roof space. A baker’s bread oven was discovered in this building by Frederick Bowden. At this time, ownership of No 49 brought with it ownership of the full length of the (Green Man) lane.

There was also built on the right, perpendicular to the High Street, a timber building which was the Oddfellows Hall, and accessed on the right hand side of the site (Metal gates were put across this access in 1960, still there in 2014.). The Oddfellows used it for their meetings and auctions were held here. During WW2 it was occupied by Pye Ltd to assemble parts for radar and communications equipment and nearly 30 local woman worked there. The building was in two parts; the front half was demolished by the Bowdens in 1960s and a carport added at the back. Subsequently they demolished the remainder as it was falling down, and added more carports.

By 1950 No 49 was called Commerce House. In 1961/62, Andrew Bowden stripped the peeling Snowcem from No 49’s building, revealing  the words  “Baldock Fine Ales. Good Stabling” painted on the front wall.

in 1989 Sherriff & Tiplady (Quantity Surveyors) purchased No 49  and sold it at the end of 2007/beginning of 2008 to Hairs & Graces, who moved there from No 29 High Street. As at May 2017 they are still running a hairdressing business from there in the front right, with offices in the front left and rear and a two-bedroom apartment  upstairs. They sold off rear of the plot in 2016.

Landlords of the Green Man

We have compiled the list below of landlords and approximate dates. Can you amend/add to it?