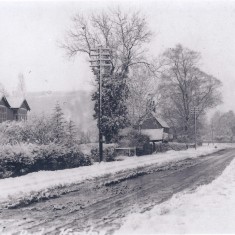 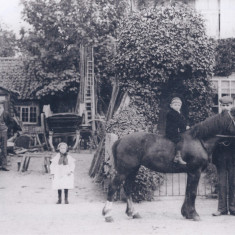 About 1949. Willers Yard alongside Walnut cottage No 102 High St
(Deacon) 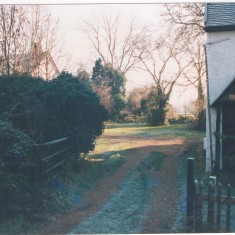 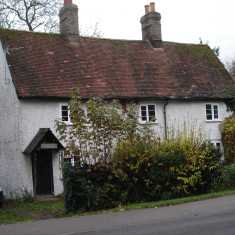 In 1870 Frederick Willers (Born about 1848) – opens in new window – and family were living in Walnut Cottage and in that year Frederick started the family wheelwrights/carpenters/joiners/coffin maker business, working from a yard at the side of that cottage until the late 1940s. As the supplier of coffins to the Village, they also “provided” funerals.

Frederick George Willers (born 1914, son of George Thomas Willers) built Riverview, 10 Haslingfield Road – opens in new window – and in about 1954 the family and  the business  moved to there from Walnut Cottage

In the photograph showing the horse, it is thought that the bearded man in the background is  George Thomas Willers, the boy on the horse is Brian Frederick Willers, whilst Frederick George Willers is holding the horse’s head. (Enlarge the photo to see all the frame)