Since we first saw an 1839 sale advert describing a ‘Pasture called Camping or Poulter’s Close in excellent condition at the south end of village’ we have discovered other clues as to its location. In an 1888 newspaper record Allen Wisbey (66) and Joseph Northrop (82) said you could hear ‘ranters’ there at the Methodist meetings but it had also been known as ‘The Play Ground’, since the pasture had been used as a children’s play area, with access by private road off The Green (Hurrell’s Row?).

Other mentions of Camping Close

Helen Greene in her 1937 book said Camping Close is older than it looks from The Green and that for the Shrove Tuesday feast – stalls were put up there, on the field belonging to James Northfield on which the 1919 council houses stood (Church Street?). Mary Greene wrote that the game of Camping must once have been played there on the pasture and the apple orchard to the south was planted later. The school Register records showed the Tanner children lived in Camping Close in the 1950s. Peter Jackson, who went to school with these children, has identified 46 Royston Rd, the house to the right of the Queen’s Head, as Camping Close. The orchards behind belonged to no 46 and are shown on the 1888 O.S. map but were removed when Pightle Close was built. 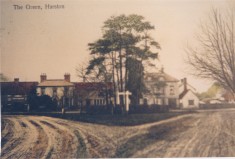 Old cottages from the Queen’s Head to 40 Royston Road may have been part of Camping Close. House deeds and census information have revealed that in the 1850s they, and the orchard behind, were all owned by Christopher Wedd, a saddler who moved to Harston from Melbourn. He lived and worked in Harston until his death in 1889. He appears to have been very enterprising renting out and even developing some of the other buildings.

In 1873 no 46 was advertised as a newly erected country residence but in fact the inside of the house reveals that it had a new façade – 2 rooms up and two down on the front of old cottages. Even today from the front hallway there is a drop of about 3 feet of steps to the older cottage level behind. In 1869 Wedd likewise advertised no 40, Melbourn House, as a newly erected Villa residence – but again it must have been an expansion of an older cottage as one fireplace mantel still retains studs that read 1822.

Between no 46 and 40 are Saddler’s Cottage and Weaving Cottage. From Helen Greene’s book we know this is where the saddlers made harnesses, with examples hung up in the large shop (now a residential bay) window. Where Weaving Cottage is, used to be the adjoining trap house, stables and loft above. Helen Greene started a dyeing and weaving industry in Harston in 1916 and we think she must have moved the work into the loft (the Greene family buying the property in 1920 sale) – hence the name Weaving Rooms/Cottage.