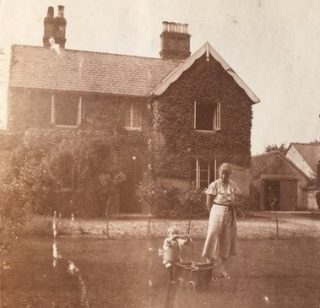 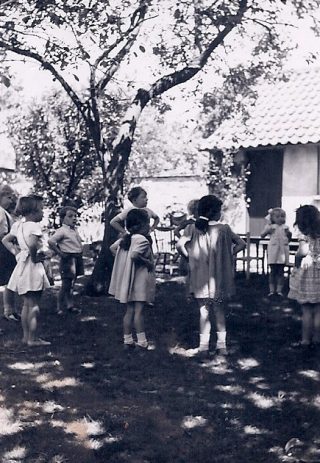 1948: Pupils in front of classrooms behind Beechcroft
(Janet Bennett)

Piecing together a life history

It has been amazing how a combination of memories and documents have enabled us to piece together the history of one of Harston’s past residents that todays’ residents know little or nothing of.

Secretary/treasurer of the Infant Welfare Centre

A letter, dated Jan 1946 found in the Village Hall archives (Dec 2015), was written by a Mrs C Kendon, of Beechcroft, Harston asking about future use of the Village Hall by the Harston & District Infant Welfare Centre that met fortnightly. We then were able (Jan 2017) to look at a scrapbook on the Infant Welfare Centre that David & Irene Deacon had been given which included District Nursing booklets, programmes and correspondence. Inside, one Jul 1936 letter was asking Celia to become the secretary/ treasurer of the centre and detailing all the voluntary work she would have to do to organise its running: arranging for buses to pick up mums from 5 other villages, organising the meeting rooms and dealing with the subscriptions, grants, paying doctors, etc. A handwritten short history showed the Centre started in 1936 under the auspices of the District Nursing Association and continued until 1974 with Mrs Kendon a skillful secretary from 1936 until 1960 when she retired. Celia’s husband had died in 1959.

David Starr, who worked at Park House from age 10-15, remembered (Jan 2016) a small school being run there but we could find no information on it until Ruth Pitt, who lives in Newton, told us her memories (Oct 2017). When she was six (1947) she cycled to Mrs Kendon’s private school at Beechcroft, 117 High St. Ruth said that Mrs Kendon was a lovely woman who had children all named beginning with A- Adam, Andrew, Adrian and Alice. There were about 20-25 girls and boys at the school which was in a big house with a big beech tree there (probably 130 years old) – the connection to Beechcroft we came across originally. There were two classrooms in the garden and they learnt through Nature Study and acting out daily life in other countries.

Later (Jul 2018) Janet Bennett, nee Hill, who used to live opposite Beechcroft, told us more about Celia Kendon- that she was a Froebel trained teacher who created such a happy place that she was sure it influenced her desire to become a teacher. For several reasons, by the time two of Celia’s older children had left, the school moved to Park House further along the High Street which matched up with what David Starr had told us. Janet also told us that her parents, Alan and Betty Hill, were 1952-4 in The Harston Players drama group that had started with the WI (of which Celia was a member). Janet’s parents scrapbook showed the play programmes with Celia Kendon and her cousin Barbara regularly taking part.

We further received an email on the history website from Janet Tivy (USA) in Nov 2018 asking about her uncle Frank Kendon, a poet who worked at the Cambridge University Press, and aunt Celia, who ran a nursery school out of their home in a large house named Beechcroft. She had stayed with them during WW2. Janet was able to supply us with photos of Celia and part of the school.