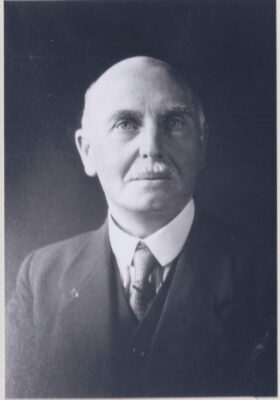 If you look at the memories of the older residents of the village many recall being treated by Dr Young (1869 – 1948) and he seemed very popular. From early 1900s he lived in Bath House to the right of the passage-way by the PO and to the left of the Village Hall and may originally have had his surgery there. He had no waiting room, you went behind a curtain, and everyone could hear what was said. He seemed to give the same medicine to everyone.

As well as Harston, Dr Young also served neighbouring villages. In the early twenties most of his journeys were done on his bicycle. Besides manning surgery hours he was always available when needed at any hour of the day or night. The doctor was called upon to attend to every problem. At this time all births were dealt with in the home and facilities were far from today’s standards. He also dealt with broken limbs and dental work – no-one seemed to be sent to hospital and there never appeared to be such things as ambulances. Although he may have waived some fees for the very poor, one charge he always insisted on was £3 for attending and dealing with childbirths.

He contributed in other ways to village life. From his spring in his garden he provided a water point where villagers could get fresh water. He gave some of his land to the south of his house for the site of the Village Hall and was one of the original Trustees when it was built in 1923. He even found time to take part in performances of Gilbert & Sullivan held there.

He supported his wife Hannah who was President of WI for a number of years. In the 1920s and especially the 1930s Dr Young gave many talks to WI members and mothers attending the Child Welfare Clinic on health issues such as First Aid, vaccinations, care of the eyes, on foods in illness & in health, on ‘The common cold & its prevention & treatment’, on bites & stings and on food vitamins & slimming.

However, he also gave amusing recitations, as well as talks on Napoleon and the first year of the French Revolution and on Stars & their courses. Other talks perhaps reflect that he travelled abroad at times as he showed lantern slides on his holiday in Morocco and on caves in France & Spain. By 1937 he was already talking about Air raids & what they mean’.

In contrast locals usually remembered Mrs Young in connection with being an early, very successful President of the WI. She was president from its start in 1920 when she welcomed members saying each one was expected to do something for the common good. She was praised for her organising abilities. However, in Sep 1928 she resigned due to ill health. She continued to take part in the WI offering her garden for summer events, supported by her husband and daughter Horatia.

Interestingly, when she got married in 1891 her husband took her surname – unusual in those days.  She was born Hannah Martha Young in Birmingham on 24 June 1858. Her father, Cornelius Young, made and sold gas cookers in Warrington, Lancashire, and she demonstrated the cookers for his company. Around 1988 she wrote “Domestic Cookery, with Special Reference to Cooking by Gas”. Since Hannah Young was well known professionally by her maiden name, when she married William Riding of Ormskirk, Lancashire he changed his name to Dr William Young. Around 1893 she wrote “Health without medicine: a treatise”. She died in 2 June 1949 not long after her husband’s death in Dec 1948. They are buried in Button End Cemetery.