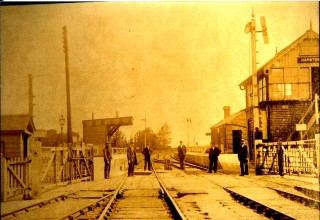 Harston station was opened on 1 April 1852. The populace were intrigued by the building of the railway and on Sunday evenings, after church and chapel services, throngs of people could be seen enjoying the pleasant walk to Harston station to see the 8.10pm train arrive and depart, taking with it the Harston maids who were in domestic service in Cambridge. The number of sightseers was so great that they were debarred entrance to the station so that the porter might distinguish them from the alighting passengers.

On the Harston side there was the platform to Cambridge which had a seat and a small wooden waiting room. There was also the Station Master’s house, goods shed and the sidings where the wagons were kept and loaded up with goods such as fruit, sugar beet and grain to be taken often to London or other cities. In return coal was brought in and heaped in the goods yard. On the Newton side was a cattle ramp that allowed animals to be loaded onto the cattle wagons.

The Newton side had the platform to Foxton, the signal box which was kept warm so workmen gathered there in the evenings, and the station itself which had a waiting room with a roaring fire. Harold Northrop was the station clerk in 1917, age 13, and recalled: Just to show how complex the Railway System was in those days – the Station Master, porters and myself were employed by the Great Eastern Railway, whilst the signalmen and plate layers were employed by the Great Northern Railway. This situation occurred when the railways were being built. The Great Eastern got as far as Foxton and so blocked the Great Northern from having access to Cambridge, they having got as far as Shepreth from London. Therefore the only way they could get trains into Cambridge from Kings Cross was to obtain running powers from the Great Eastern Railway.

Harston was a busy station with lots of passenger traffic. In the main, trains were the sole means of travel and first class passengers were especially catered for. Some remember when Sir Charles Walston of Newton Hall went to London with all his staff for the London season. Mrs Navit would go to the booking hall and collect and pay for all his tickets, after his butler had previously been and given the number of first and third class tickets he would require. On Saturdays there was a lot of passenger traffic with a market ticket issued at a cost of 6d return. On bank holidays and boxing days the theatre train left Harston at 8.10am for King’s Cross conveying parties to the theatre in London for 4s 11d return; the return was at midnight from Kings Cross arriving home around 2am.

What can you remember about using the station?