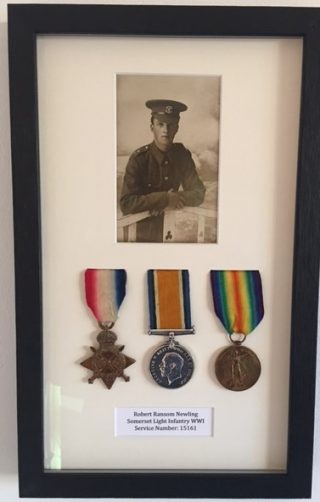 Where did Grace live?

We recently spotted a postcard on eBay franked Harston and dated 1911. It was sent by a goddaughter Grace. Was she part of the family in front of a house on the photo? What family was it? Where was the house?

We began searching the 1911 census for a Grace living in Harston –found two but houses did not match up to the picture. Harston doesn’t have that many brick built solid looking houses with slate roofs. We compared existing photos and thought it might be 31 Church St – particularly as there are marks still present where the front porch may have been in the past. We contacted Betty Folbigg who used to live next door in 1930s-50s with her parents Ron and Ellen Bass. She confirmed it was the correct house – she lived in the other side – they were semi-detached and the front porch then housed two front doors that went straight into the front rooms. The present owner found evidence of this when she removed wall paper and found a wooden door below. Outside it is bricked up.

Betty also thought she remembered the neighbours were the Newling family. Back to the 1911 census. We found Betty’s father Ron and grandmother Alice Bass (who lived at No 29) and, yes, found the Newling family lived next door – father Frederick, wife Rose and children William, (Margaret) Grace and Arthur. We had found the Grace on the postcard! We had previously and wrongly thought they were living with two other Newling families in 35-39 church Street. However, one of Frederick’s sons, Robert Ransom Newling, was living next door with his maternal grandmother June Ransom.

We then emailed Rob Sharp who had previously sent us pictures of his side of the Newling family. He was able to identify all the children, including his grandfather Robert Ransom Newling, the tallest boy in the picture. His brother William was to the right, Arthur and Grace to the left.

In previous pictures Rob had sent us we had never quite been able to work out where the buildings in the background fitted in – now we could. His family and cousins had never seen the photo on the postcard before so were delighted to receive a copy. Both Robert Ransom Newling and William Newling fought in WW1 and Rob was able to send me photos of his grandfather’s WW1 medals and records.