Although we have often looked at places and people within the main part of Harston village the outlying places hold their share of history.

Rectory Farm (house) is along the parish’s northern boundary and is probably more closely aligned with Hauxton. In the past, however, the income from the tenancy of the Rectory Farm estate (once owned by Bishop of Ely, then Jesus College, so called College Farm in 1864) would have paid for the vicar of Harston parish church. The owners of Harston House – first the Hurrells from C17, then the Longs were tenants in C19. Newspaper articles reveal that William Long often prosecuted locals for stealing his chickens from Rectory farm. Coprolite was also dug on his land and when Sir W G Greene later owned the land. We don’t know the age of Rectory Farm but it didn’t appear on 1799 Inclosure map. 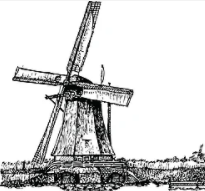 Sketch of a Smock windmill

What is now London Rd used to be called Newton Rd until the 1960s. We are not sure when exactly the name changed. At the corner of London Rd and the High Street there used to be a smock windmill on the present Vujon site. The windmill was owned by William Cambridge in October 1830 but burnt down in September 1833 when the sails broke loose in violent winds, causing friction and fire. The Old English Gentleman pub was built on the site by Dec 1844. Many houses along London Rd appeared in the 1930s, built by R Harradine. The houses along the northern side of London Rd belonged to Hauxton parish until 1980 when the boundary was reviewed in Harston’s favour and now goes along their back gardens.

At the boundary review the M11 became the eastern boundary on Shelford Rd next to where ancient Roman kilns were discovered. Off the Shelford Rd is a footpath uphill to St Margaret’s Mount where you will find the Wale Monument. Gregory Wale was the old lord of the Manor of Harston in C17 & C18. After his death in 1739 a friend put up the monument to him. Below the monument are several coprolite and lime pits dug in C18 & C19.

At the junction of Shelford Rd with London Rd is Keepers Cottage, named on 1980s maps as The Old Enclosure Cottage- suggesting it was built soon after land was enclosed around 1800. David Deacon noted that Mr & Mrs Cracknell- old gamekeepers lived here for many years – but we are unsure which Manor the cottage was connected to. Moor Barns along the Shelford Rd again gives a clue that the land was once moorland/heathland and common to Harston, Hauxton, Newton and Little Shelford. These properties are likely to be severely affected by the proposed East West Rail. 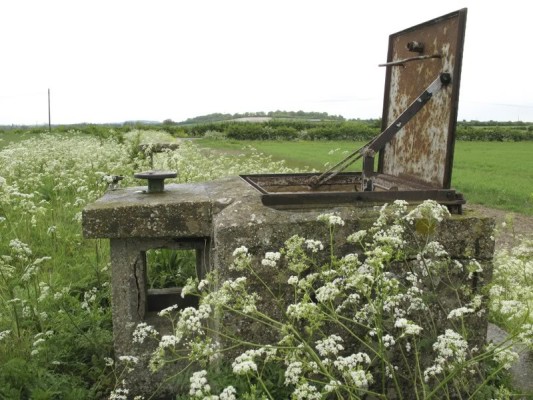 Two bungalows that used to be chicken farms also mark the eastern boundary with another coprolite pit on the Newton side of the present Newton Rd. Towards Rowley’s Hill you can see the old observation post, a point used in WW2 but rebuilt to a depth of about 25 feet in the 1950s/60s due to the cold war.  Below Rowley’s Hill is a large coprolite pit. Also at the top of Newton Rd exists the remains of the old windmill – again built after enclosure but falling into disrepair around 1900s. Opposite is the unusual chalet style house named Sunbourn, built in 1925 for Signe Laven, a Swedish physiotherapist who came to treat Mary Greene of Harston House.

Along the southern boundary of Harston, marked by Hoffers brook, you will find Manor Farm, farmed by the Rowley’s and Taylors of Harston Manor until after 1900s when it was taken over by Cambridge Council Farm estates (1915-70s). Archaeological research showed cropmarks from Bronze Age to Anglo Saxons and these became a scheduled monument in 1978, with ploughing on them restricted to preserve them. The Austin family farmed here from early 1900s to late C20. We are not sure when the farmhouse was built as it didn’t appear on the 1799 Inclosure map.

As you leave Harston on the Royston Rd you will come across New Farm, now threatened with demolition by the proposed East West Rail. This farm was built in 1850 by local Northfield carpenters who took down the old farm next to Harston Manor and rebuilt if further away along the main road. In the 1950 sale of Manor farmland this was called Manor Home Farm. 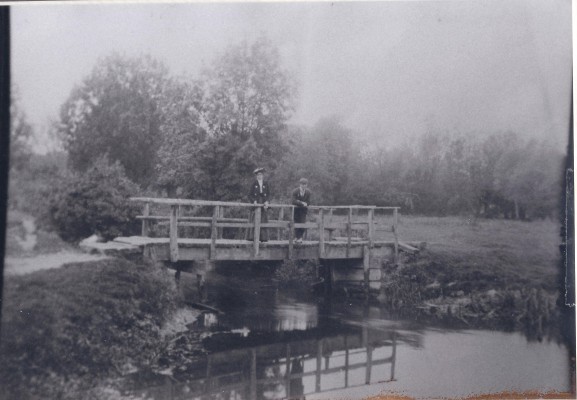 The public footpath to Barrington largely forms the boundary between Harston and Haslingfield. A recent walk along this showed it was overgrown but the farmer had kindly mowed a field side path around a circle of trees next to the path. Within the trees is a large pond that was once the site of more coprolite workings in late C19. The old road to Haslingfield used to go over by Harston Mill, as did the local footpath until 1990s? and point towards Charity farm. This is in Haslingfield but the previous Seagrave tenants were closely linked to Harston. The triangle of charity land became Haslingfield allotments. These are occupied about 50/50 by Haslingfield and Harston allotment holders reinforcing the strong link to Harston.

The river continues north as the western boundary of Harston. At Burnt Mill Bridge the bridleway from Hauxton crosses the river to Haslingfield. Mills were made of wood originally and easily burnt down. This one many centuries ago.