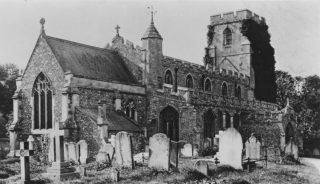 The Harston Local history Group will be leading a walk around the churchyard later this month (see separate notice) so it seems appropriate to relate a few facts about it.

The first record of a church at Harston is in 1096 when the rectory was given to the Prior of Barnwell. We can assume that burials have been taking place in the churchyard for a thousand years or so. The Bishop of Ely’s transcripts contain the first recorded burial taking place in February 1599 of Matthew Robinson – a traveller. All parish records before 1686 seem to have been lost so the first burial in the records is of William Campion in 1687. The oldest remaining gravestone in the churchyard is that of John Cundale who died on 22 Mar 1714 age 36.

By the late 1920s it became obvious that the churchyard was reaching capacity and on 24 April 1928 the Parish Council paid Jesus College £120 for the freehold of land in Button End to provide a new burial ground. The first burial here was of John Robert Tuck on 29 January 1930 age 70. After 1930 there were very few burials in the churchyard; most that happened were within existing family graves. Ashes continued to be scattered in the churchyard and in 1974 the Garden of Remembrance was created.

There are about 160 gravestones in the churchyard, of which six belong to Harston vicars – Revs Dickman, Leworthy and Durbin died in post, Revs Baldwin, Ward and Mansfield-Williams had left the village but wanted to be buried here. A few families account for many of the others. On the right inside the entrance there are gravestones for six of the Greene brothers & sisters of Harston House whilst a seventh, Sir William Graham Greene, has a memorial inside the church but was buried at sea. Six gravestones of the Hays family of Baggot Hall are next to the path to the vicarage. Next to them are six of the Taylor family who were tenants of Harston Manor in the late 18th – early 19th century. Most of them left Harston for Kneesworth but were buried here.