You are here: Home>New contributions>VE Day Letter 8 May 1945 From Frank Kendon to His wife Celia 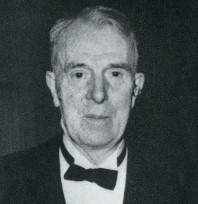 I wrote to you yesterday and didn’t post the letter for it is still in my bicycle basket and it was no good posting it in Harston. It is about 2:30 (pm), and I’m free and at home, and there’s nobody in our home left but me. Margaret and I hastily put up an arch of flags (Adam’s, Alice’s, and two Union Jack’s which you had stored away) over the gate. It is the end of the war. I don’t know what it means, do you? I think it could mean that none of our children need ever take part in another, but how to help to bend the world to that end none of us knows.

I’m sitting in the garden, in a deckchair, without coat or waistcoat; the Mackenzie’s wireless is making boxy musical noises over the fallen fence, a big brass band I think. Margaret has gone to Cambridge, under promise to be back safely by half past nine. Alice and Adam told me they were to have a bonfire and a treasure hunt and an extra day added to the holidays.

I have walked up the village as far as the Old English, but the flags are small and haphazard, not so well planned as on the Coronation Day. People have got a little tired of waiting for the permission to hang them out. Mr Barker, however, has a wonderful display – his connection with Eaden Lilly may have helped. Our real decoration appears to be the beech tree.

To sit in the garden and write to you (rather pathetic!) was the best thing I could think of doing, for I should really like to have you here, just you for a little while and then we’ll walk out somewhere and fetch our four lovely children home and begin the years of peace. The garden looks like peace, no need of flags for the irises and poppies and buttercup tulips and peonies are all out, and there are two rose buds ready for you.

I have just been down the village to get a loaf and survey the other decorations and to post the letter I wrote yesterday. The decorations are few and modest, but of course the Londoners next to the butcher’s shop have far more than anyone else. Nothing at Ayres, nothing at Harston House; nothing at Harrisons; nothing at Hays. Mrs Swan (I think) has painted in horrid green paint on a whole sheet – Victory thanks to our boys – and stuck a little Union Jack in one corner. I hope the paint is washable.

Then about dusk or a little later, as it was a mild nightingale evening and we’d heard a good many goodfun bangs (or so we assumed) we thought to view the village. We left our own light streaming across the lawn and high up on the beech tree and went down under the arbours of leaves and light to the gate. There we saw a red glow, it appeared to be down the Drift. As we got nearer we saw it was an enormous bonfire at the far end of Park Field. So we went to it. All the boys and girls of Harston were there – it was an amazing picture, for by now the night was very dark and the fire was all a flame and red heat. It lit up their faces. Shoals of sparks were rising and swimming madly in the near sky, Newton was letting off rockets behind the trees.

There have been bangs galore. Cambridge had some guns, and it is still (nearly 1 o’clock) having some searchlights. About 11:30 Margaret said “Listen! there’s the all clear!” and so it was. I hurried to the door. But the all clear was doing an odd thing; it was coming nearer and nearer, and NEARER, and lights were screaming down the road. Someone (I guess Americans) had fixed a siren onto a car, and came tearing full blast through the village, leaving a trail of barking dogs….

Above is an extract from the letter Frank sent to his wife on Tuesday 8th May 1945. It was sent to us in May by his grandson Mark Stephens. The full letter can be seen on https://www.harstonhistory.org.uk/content/people/letter-from-frank-kendon-to-celia-kendon-describing-ve-day-1945. Harston Local History Group welcomes any other information on Harston people and places.