You are here: Home>New contributions>Walking Home from School in the 1950s

Walking Home from School in the 1950s

Penny Wiles lived mostly in London Rd, Harston from 1954-65 and below is an extract from her memories recently shared (Dec 2020) on the harstonhistory.org.uk website:

I have always said that the walk home from school was one of my favourite memories from my days in Harston. This might involve playing marbles, collecting birds eggs, jumping ditches, (sometimes getting a wet ‘un ) and best of all picking flowers.

The person I remember doing this with was Marsha Connelly. She lived in the same road as me, but her mother, Alma was a Harradine, and that was a land owning family that knew lots about Harston and the people who lived there. This was particularly useful when the flowers we wanted to pick were on people’s land, because we would have to summon up the courage to knock on the door and ask if we could pick some of the flowers for our mothers. The owner of the house would invariably recognise Marsha, and would happily agree.

The reason why I remember this cycle of flower picking so fondly, is that it was something we chose to do in a very natural way. Nobody ever told us what time of the year to start, but we went to a series of places and collected the flowers almost by instinct. Some of the places were easy going to find as we walked past them on our way to school. Others were places we hardly ever went to, except when we wanted to pick the flowers.

I don’t recall many mixed bunches being picked. We didn’t bother with buttercups, mallow or yarrow. They didn’t seem important enough. Daisies were alright for making chains, and we certainly did that, but the stalks were too short for a posy. We disregarded the tall white cow parsley flowers, but we used their leaves as they looked like the ferns you got in wedding buttonholes and posies. We hoped one day to find an orchid, which we knew was rare, but if we did we didn’t recognise it. We dreaded finding deadly nightshade which we knew to be poisonous, but again, I’m not sure we would have recognised that either.

I remember a house not far from Miss Jackson’s hairdressers which belonged to the Miss Pasks. The house was set back from the road and had a large tree in the front garden. Early in the year, snowdrops would spring up around this tree, it might have been a yew. This is one of the houses where I remember us asking if we might pick some flowers, and we were allowed.

Behind the Baptist church there was a graveyard where lots of primroses grew. We used to visit there and I remember the posies we picked, with the primrose leaves on the outside. We were slightly concerned that these flowers might belong to the church, and therefore we might be stealing, but we picked them anyway. After quite a lot of hunting, we discovered the best place for violets was the bank of the railway bridge in London Road. This was also a bit tricky, as the instructions were always to stay away from the railway lines. We were probably a bit vague if we were asked where we found our violets. Near the doctors, close to where the Hartshorns lived was a ditch with a steep bank which was a mass of aconites. It was a bit of an adventure to reach the flowers and escape without a wet foot.

This is all a bit of a romantic picture of little girls skipping home from school gathering flowers for their delighted mothers, but one of the reasons this ritual has stuck in my memory, is because of the things that went wrong.

The first concerns one of our expeditions down the Drift. There was always a hint of danger when you set off down the Drift; it was away from houses, we weren’t sure who the land belonged to and if they minded your being there, for example. But in a bit of an idyllic haze, I remember Marsha and I setting off down the Drift in search of the cowslip field. Maybe Marsha’s mum had mentioned it, maybe another child, we weren’t certain where to find it but we believed it existed. We wandered further and further down, then off to the left, it felt like we’d gone miles, but it probably wasn’t very far. And then, hallelujah! There it was, a whole field of cowslips, like some scene from The Wizard of Oz, stretching out in front of us, thousands of them. We picked huge bunches and carried them home. Mission accomplished.

The seasons pass and we are heading home from school, when one of us senses that it might be the right time for cowslips again. We make a plan, head off down the Drift, and wend our way toward the place where we found the cowslips. Disaster! We are too late. The cowslips have flowered, they are over. We scoured the field for the remaining few but there were hardly any. We cannot understand how this could have happened. We are devastated. As an adult I have often thought how amazing it was that we got it right so many times, and that the one time we got it wrong surprised us so much.

The other story of flowers and getting it wrong is stranger yet. On our way home to lunch we saw some pretty white blossom which we decided would make good bunches to take to our mothers. So we each gathered a fairly hefty bunch each, and carried them back. After lunch we met up outside my house to walk back to school. We were both a bit crestfallen.

“No, nor did mine, she wouldn’t have them in the house.”

“That’s what mine said too.” 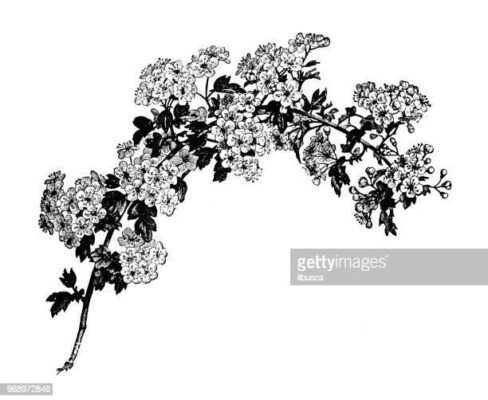 We had inadvertently gathered handfuls of may-flowers, which were deemed by both our mothers to be such potent symbols of bad luck that they rejected our offerings for the first and only time. Looking back I can believe that Alma, brought up in the village, would know about this superstition, but how my mother, born in West London believed in it too is a bit of a surprise. Anyway, this joint rejection made it very clear to the pair of us that we would have absolutely nothing to do with hawthorn flowers ever again, and certainly never bring them into a house.

A quick internet search has shown me that this superstition is or was widely held in both England and Scotland.