Harston has seen the number of drinking establishments reduce over recent years. But is this a recent phenomenon?

Ale has been sold in Harston from the Middle Ages when people brewed ale at home. If they had produced an excess or a better quality brew than others, they could sell it to neighbours from their own house – hence alehouse. There are records of alewives in Harston being fined for selling drink to travelling strangers rather than to their neighbours. There are no records of where these alehouses might have been but they are unlikely to have had names. They simply advertised their business with a pole above the door garlanded with foliage.

Alongside alehouses were inns. The major differences between the two were that inns provided sleeping accommodation and were run on more businesslike lines, the innkeeper often being quite wealthy and part of the social elite. Inns became particularly important as travel by coach and horses increased. The earliest drinking establishment that we can put a name to is The Thoroughfare Inn which is mentioned in the early deeds of Harston House. No other details have been found.

Another early inn on the High St, now housing an interior design business, was believed to date from C16th. However an 1800 map shows that there were no buildings on that (east) side of the road. The Shadworth Court rolls show that it was in fact built around 1819 as The Waggon & Horses (its name changed to The Coach & Horses about 1875). It closed in 1985.

We now know that the original Coach & Horses pub was a C16th building on the west side of the High St and had been renamed the Green Man by the time it was sold in 1822 by John Reynolds. The Green Man was rebuilt in 1838 nearer the main road, closed 1907, and is now occupied by a hairdressers.

Hill View Cottage,72 Church St (to right) where the Sign of the Gate once traded. 76 to left.

There were two drinking places associated with mid C19th coprolite diggings in Button End.
One was The Sign of The Gate which was in what is now Hill View Cottages, Church St. Writing in 1972, Rev Mansfield-Williams, vicar of Harston 1954-60, said that Edward Bosanquet, Harston vicar, 1844-48, had lodgings there. He also remembered an iron stanchion fixed to the chimney to hold the pub sign on which was reputedly written ‘The Gate hangs high and hinders none, pay and drink and jog along’. 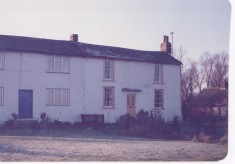 The other was The Fleece in Button End. This was built about 1830 and owned by Mr Whitechurch of Baggot Hall. George Willers was the first landlord. It had a large room which ran the length of the building where village feasts were held and large cellars where the ales were brewed. It housed workers constructing the railway through Harston. The original building has been greatly extended at both ends and now forms Nos 1 & 2 Fleece Cottages. 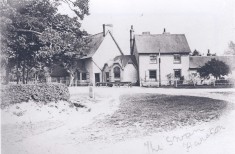 This had stood on Royston Road opposite the Green since the late 17th century. It was the largest of Harston’s inns and an important coaching stop on the Cambridge to London route and had stables for 6 horses. It was also the venue for many of the village feasts and major auctions. On the night of 8 May 1928, the inn caught fire and was completely destroyed, inspite of the attendance of the Cambridge Fire Brigade who could do little as piped water had not yet arrived in the village. 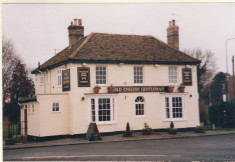 This (now Vujon restaurant) was built in the 1840s on the site of a windmill which burnt down in 1833. In 1845 sales documents it was described as ‘having a taproom, bar, large parlour, cellar, kitchen, 5 bedrooms, yard, garden, brick & tile stable, detached cottage, arable land’. The story of its unusual name is that when the vicar of Fowlmere was passing during construction he pointed out to the builders that they were encroaching on the highway which resulted in newly erected walls having to be pulled down and rebuilt. The builders were so angry that they threatened to call the pub ‘The Meddlesome Parson’ but when he passed again and praised them for their work, they opted for The Old English Gentleman. It closed in 2008. 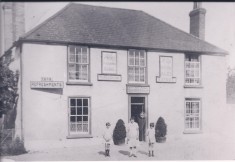 This was built in 1860s and was one of many properties owned by William Long of Harston House. It once provided accommodation and the car park area has at various times been allotments, chicken runs and quoit beds. In 1913 it was described in the press as ‘the sanitary arrangements are about the best in the village. About a dozen carts can stand in the yard, which is the largest in Harston. People leave their horses there while they take the train, making it the most convenient in the village’. It has been sold with permission to build a house on half the carpark. 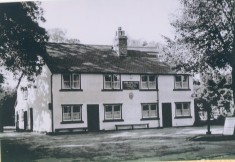 This was another of William Long’s properties and was probably built early C19th although a building was shown on that site on the 1799 inclosure map. It originally had a large dovecote behind the current car park. This was converted into two cottages and then into the Dovecote Tea Rooms in 1930s. These were demolished in 1950s. The premises were occupied by a series of restaurants since 2002 and finally closed August this year. 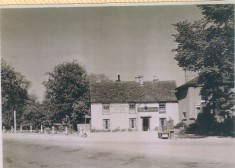 This has been in operation since before the 1850s and was once owned by Christopher Wedd, a saddler, who owned all the adjoining properties on the Royston Road. The Ashby family were innkeepers for many years (1890-1937). It now houses the Thai restaurant and is the only pub still operating Oct 2016.